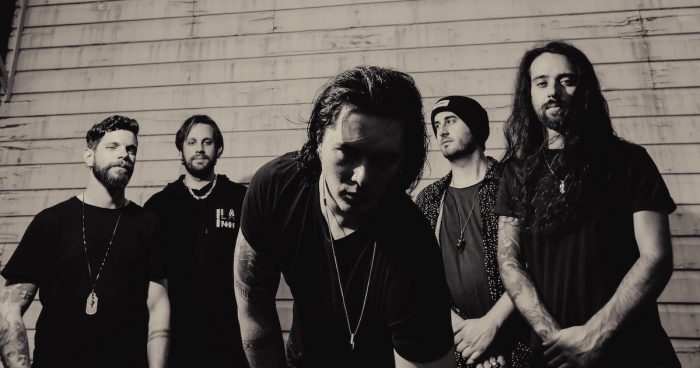 It’s yet another taste of their five-track singles collection that’s set to be completed at the end of this year, and it’s once again seen the band in their newfound heavy element. Before its official release, we caught up with frontman Jordan Von Grae to chat about what inspired it and more.

Hysteria: Tell us about the band and how you came together?

Jordan: The band’s been around for close to ten years now. I only joined about two years ago, but most of them grew up together and went to the same high school. They had a band called Rattlesnake, and they did their rounds on the Sydney scene. Funnily enough, I actually used to play with them when I was in my old band.

In 2015, they went through a bit of a rebrand. They got Ned Koncar on board as the new guitarist and became Bad Moon Born from there. Following that, they released two EPs and then I joined. We had a big sit down and discussed where we wanted to go with our musical direction. I’ve got a different vocal style to the previous singer, and after those chats, we landed on a modern metalcore/hard-rock fusion. We decided to start making plans from there. It’s been fun.

So how did you joining the band actually happen?

I’ve been good friends with Voya (guitarist) for years. I think coming up at the same time as the boys definitely helped. When Frank (Lakoudis), the original singer, parted ways with them, I got a message from Voya asking if I’d be up for a chat. He basically ran me through the situation and how they were looking to audition for new vocalists. He said I’d come up, and he asked if I was interested.

What’s the story behind Fallout?

It’s the third of five singles we’ve got coming out this year. We’re packaging them as a singles collection. We were originally going to do an EP, but we really wanted to release each song as a single and figured there wasn’t much point in doing an EP following that (laughs). We sat down to write in mid-2020. We threw a couple of demos down, pulled out some older material and then got to work. Once we sat down to pen the lyrics, it became apparent that we would go on a very personal journey with these songs. We really wanted to weave our personal experiences in. We hadn’t really delved into that lyrical style before, but it was territory we wanted to get into.

Fallout fits into that. It’s a sonic representation of the psychological state one might experience in the aftermath of a mental breakdown. It uses a nuclear fallout and wasteland to express feelings of isolation, loneliness and confusion. When we came up with the themes for each song, we thought it fit really well, sort of in the centre. That was one of the reasons we decided to release it as the third single, each of the singles has told a story as they’ve been released.

Once we sat down to pen the lyrics, it became apparent that we would go on a very personal journey with these songs.
[ Jordan Von Grae, Bad Moon Born. ]

We heard it took a bit of time and reworking before it came together.

Voya’s actually had this riff since 2016 (laughs). He’s tried to fit it into a bunch of different songs, and we’ve just never found the right formula to bring it across. He’s been in love with it for a long time and put a lot of work into it. When he first played it to me, it blew me away. When we sat down to pull everything together for these singles, we really wanted to make that riff work. We sat down and revisited it with that modern approach in mind, and everything fell into place from there. It underwent a couple of rewrites, but ultimately we ended up really happy with it and proud of what we’ve achieved.

I got sworn into the band in July or August of 2018, and then we toured with Buckcherry in October. That was my first experience touring the country without being in the back of a van (laughs). We flew to all the different cities, like Perth and Adelaide, which I hadn’t been to before. We played a sold-out Melbourne show at Max Watts, which was one of the greatest I’ve ever done. Having such a large number of people just screaming and shouting and getting into the music, especially considering we were the opening band, was uplifting and definitely a highlight.

When touring is a go again, who are some bands you’d love to share the stage with?

Bring Me The Horizon, Architects and Asking Alexandria. There are many bands out there that we’d love to play with, but if I was going all out, I’d say them. Landing a bill like that would be a dream come true.

Going back to the remaining singles, when can we expect to see them?

Relatively soon, it just depends on what we can do with COVID and everything like that. We’re lucky that everything’s recorded and has been finished for a while, but I mean more in terms of artwork and video content. We were originally going to film a music video for Fallout, but then lockdown hit the week before we were supposed to start. We had to think on our feet, so we decided to do a lyric video instead, and that experience ended up being great. We worked with 12 Inch Media, and they blew it out of the water. We were really happy with it. Doing a lyric video instead of a music video for our next single could be on the cards if we’re still in lockdown. We ideally want to get those last two singles out before the end of the year.