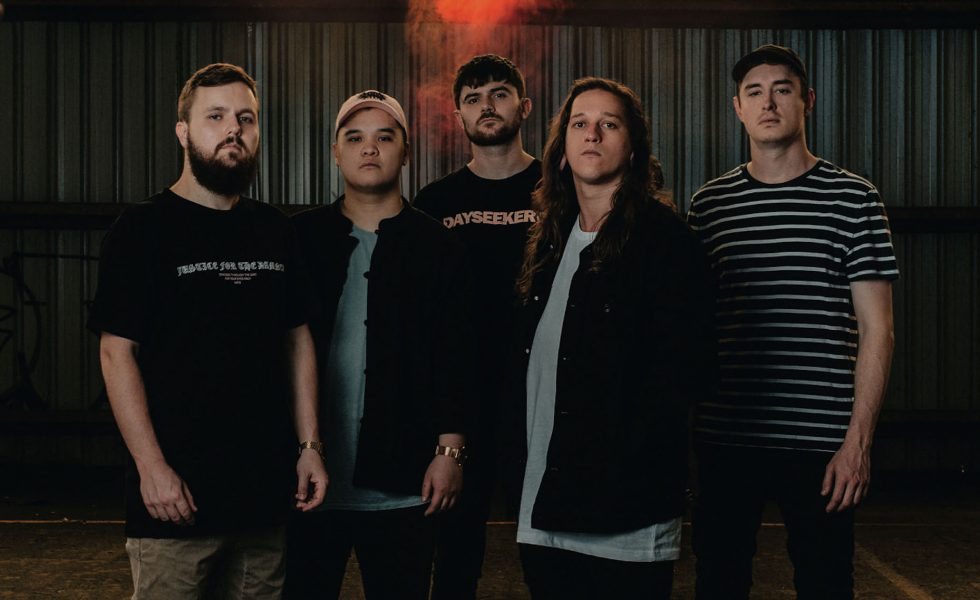 Australian metalcore band Polaris are a band with some expectations on their shoulders. With their debut album The Mortal Coil earning them an ARIA nomination and charting in the upper ends of all the important charts, Polaris have landed in a uniquely high-pressure position on the eve of the release of their follow-up album The Death of Me.

MORE: THE HYST LIST: The Best Jams Of 2019 // DOWNLOAD FESTIVAL AUSTRALIA: 6 Heavy Bands You Can Not Miss! REVIEWS: THE AMITY AFFLICTION: Everyone Loves You… Once You Leave Them // SUICIDE SILENCE: Become The Hunter // LOSER: Mindless Joy // POLARIS: The Death Of Me

Chatting with drummer Daniel Furnari about the upcoming album, those pressures are something of an elephant in the room that must be addressed.

“I have to admit, I’m not very good at blocking that stuff out,” says Daniel “I’m not good at blocking anything out, to be honest. My mind is always racing with those pressures. I think we just try to take it in our stride and rather than look at it as pressure, look at is a reassurance … look at it as an affirmation that your creative choices are leading you in the right direction.”

“There’s always a sense that you want to outdo yourself when it comes to making records, I don’t know if that ever goes away,” Daniel opines. “Obviously knowing something that you’ve done has done well it creates a fear of not being able to live up to that but it also feeds a determination that you have to because, I mean, for us as artists to not move forward and not improve would be devastating to us. It’s not necessarily about how something has done in the past, we just want to keep growing.”

With this sophomore full-length, the band have produced a sprawling, emotive piece of work that highlights new directions and intense new skills honed after an impressive touring schedule that has taken Polaris all over the world and seen them play with leading lights of the international metal industry. Asked if they’re feeling good about this new album Daniel can’t hide his sincere excitement.

“We’re stoked!” Daniel chimes cheerfully. “We’ve had that time now to get our heads around what we made, and really appreciate it, and be really proud of it, and I’m just so excited now to put it in front of everyone and finally get that wider spread of feedback … to get it out there and see what the greater population thinks of it. I’m psyched.”

Polaris are an atypical metal band. They create heavy music that is mosh-ready metalcore but also quite transcending the genre with progressive flourishes and genre-forsaking musicality. They write about relatable human themes, presented with almost inhumanly technical groove mixed with a lofty melodic sensibility and a textured approach to songwriting.

“I guess you could say in our music there’s a sense of yearning for something,” says Daniel. “There’s a desire to move forward and a desire to always search for more, and whether it’s searching for more from the life that you’re living or more accurately—and more often in the lyrics—searching for more from yourself, and trying to hold yourself to a higher standard and trying to find out what you’re capable of and what you’re not capable of, throughout the lyrics there’s a desire to learn and be better.” Daniel adds, “And that’s also reflected in the frustration of not always being able to accomplish that and failing yourself at times.”

“The feeling behind the music really does correspond with the feeling of the lyrics. It comes from the same place that we’ve always come from which is sort of examining your personal identity and where you fit into the world and how you deal with just being human in all of this, in this situation that we’re all in; this strange phenomenon of life, trying to find an identity in all of that, trying to stay true to yourself, trying to learn and grow as a person.” He adds, “A lot of our lyrics do kind of deal with that growth or change and growing up, and I think that‘s just natural because of the stage of our lives that we’re in. I mean, we started the band when we were eighteen, nineteen, twenty … so you know we’ve been working on this band during years that were really formative and really important for all of us as we’re … trying to figure out who we really are as people and how we view ourselves, and who we want to grow into as people.”

With this latest album, Polaris have explored some of the themes of growing and changing, which seems very much to be the band’s MO, both thematically and as a unit of metal troubadours: change via the crucible.

“I think the record kind of deals with losing faith in yourself and in the world around you at times and trying to find that again,” Daniel says, “and also deals with a desire to change, a desire to grow or move forward or destroy or kill off the aspects of yourself that you’re not happy about that you’d wish to improve—hopefully from there grow into a stronger better person, which is what was kind of reflected in the title The Death Of Me.”

The Death Of Me is out now via Resist Records