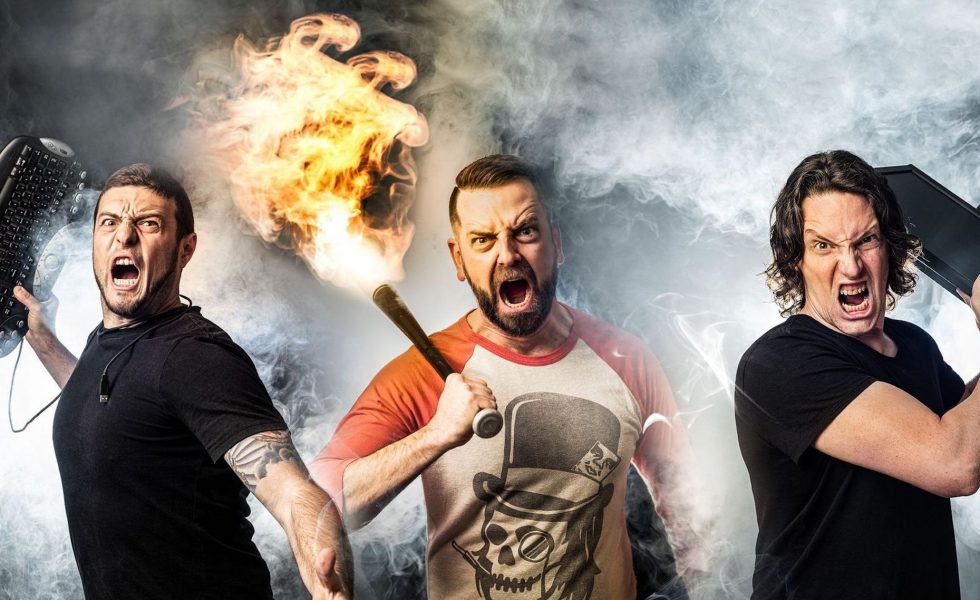 THE OPINION INDUSTRY // Music For The Masses

Sydney alt-rockers The Opinion Industry is delivering music for the masses.

Their debut single, Opinions, took aim at cancel culture and their follow-up, They’re Recording This, has proven to be just as potent. The track was inspired by big tech and the lack of privacy in the digital world- if you’ve ever felt personally attacked by your Facebook suggested posts, this one’s for you! Ahead of its release, we got frontman Benj Axwel to walk us through what inspired it and more.

Benj: I’ve been playing with Cruisy (drums) since I was a  teenager. In the mid-2000s, we both played in a band called Sleight of Hand. We used to tour, release music and featured on Triple J- all that stuff. We kind of wore ourselves out after ten or twelve years. We had some great times and some great memories. We played some big stages and supported some of the country’s biggest bands like Cog, Grinspoon and The Butterfly Effect.

I had a bit of a come to Jesus moment a couple of years ago. A guy from our hometown is quite big in Nashville and a country music star these days. Seeing his success, I guess I got a bit of healthy jealousy, seeing him sell out multiple nights at the Enmore and these big stages over in America. I always felt like I was a better songwriter than he was [both laugh]. It created an itch within me, and I felt like I could do it.

We’re all comfortable in our everyday lives with decent jobs, mortgages, families and the like. But I saw everyone around me picking up hobbies like golf and fishing, and none of that interested me at all.  I love writing songs, bashing them out with a bunch of really talented guys and creating rock music. Cruisy and I have always written catchy songs, but we think this new batch we’ve created for The Opinion Industry is the best stuff we’ve ever done. And if it’s getting better, we’d be mad not to at least put our music back out into the world and promote it.

Mac (Ben McDonough, Bass/Vocals) was a big fan of our old band, and I’ve worked with him in the past. When his original band folded, he jumped straight to me and asked if I’d be interested in writing music together again. I told him I had this new band and needed a bass player, and he was all over it.

What’s the story behind They’re Recording This?

It’s our second single. We recorded some songs about 18 months ago, and we were going to release them, but we instead decided to put them on the shelf and focus on some others that were less than three and half minutes long, with three choruses in them and some of the hookiest/catchiest bits we could create.  We were really happy with how those songs came out. We feel like we nailed what we set out to do.

I would call They’re Recording This the catchiest song of that bunch. It’s the song my kids sing, and they’re into the wiggles and all that stuff. In terms of subject matter, we’re called The Opinion Industry, right? Thematically, we discuss everything that happens to us in real-time. Opinions was about people shouting at each other on the internet, and They’re Recording This is about how big tech companies are following us and our every word and move through our social media activity.

Right now, I’m sitting in my garage looking at a ladder. Now that I’ve said that word, I’m sure you’ll get a Bunnings sponsored ad in your feed. While we see that as convenient, and we turn a blind eye to it in many ways, it’s fucking scary. I’m fearful of having an Alexa in my house because I’m not sure what that could mean for me. I could be paranoid, but at the same time, does it feel necessary? Do companies really need to know about us intimately? This song is about how scary that situation is. It’s got a big System of a Down/ Rage Against the Machine vibe to it, which sets the backdrop for that overlord vs. people/ David vs. Goliath narrative.

I could be paranoid, but at the same time, does it feel necessary? Do companies really need to know about us intimately? This song is about how scary that situation is.
[ Benj Axwel ]

We thank you for the fact that we’ll have a ladder advertised to us in the next ten minutes!

[Laughs] If you’ve already got one, it’s not going to stop them from trying to sell you another! The opening lyric to the track is, “there is a topic that we should all be talking about, tech company aficionados’ hidden agenda visible in plain sight. ” They say that it’s one thing, but we have a gut feeling that it’s really the other because we’re very distrusting of our leaders, governments and big companies, and it’s justified in a lot of ways.

The scary thing is when you think about something and haven’t even mentioned it. Like I might think to myself my ankle is sore and not tell anyone, but then suddenly I’ve got an ad for ankle straps. It starts making you think, am I predictable? Can they read my mind? Am I paranoid? It’s just a really anxious situation to be in because we don’t know what they know or how they can find things out. It’s a huge grey area, but for me, it can be summed up in two words, and they are something’s up. The song is very much about that.

With both this single and your debut, you’ve blended a few genres together. This one does feel a bit heavier, so we’d love to know where you drew your sonic inspiration from.

Great question! I hope the guys don’t mind me saying this, but I probably draw from the widest palette. My old band had metalheads in it, so we were always going to be heavier. We grew up in the early 2000s, so that whole nu-metal era is really within us. Not so much with rap-metal but definitely with bands like System of a Down. We also draw influence from bands like Incubus, Sevendust and that heavier groove-based world where the songs have a really catchy and melodic chorus.

Personally, I draw the biggest inspiration from my childhood. I was a massive Michael Jackson fan growing up and still am to this day. I was a big fan of the 80s one-hit-wonders like Hall & Oates and Roxette. I was all about anything with a bulletproof pop chorus. I didn’t find heavy music until later on in life. People will get an 80s/early 90s accessibility with our sound. It just so happens to be driven through a guitar orientated backdrop.

In terms of more recent bands, I love Queens of the Stone Age, The Killers, Muse and even singer/songwriters like Fiona Apple. Just anyone creative in their genre. What you’ll find with our future songs is that we’ll bring in funk, jazz, and folk elements. The anchor to our music is the topics we discuss.

What else can we expect to see on the upcoming EP?

We made a conscious decision to release our EP as singles. Lockdown has impacted that a bit, but we’ve already made the music videos for our third and fourth singles. We address a few issues, and each song has its own one. The next single discusses modern protesting, which I daresay will be quite divisive. We also have a song about Karen syndrome coming up, which could potentially be divisive too. Or people might find it funny.  We’ve also addressed climate change and the future of the world. In terms of sound, I would say we ride the line of System of a Down, punk (I’m a huge Billy Talent fan, so I draw a lot of inspiration from them too) and a blend of metal/nu-metal and hard-rock.

Give us a stand out moment from the EPs recording process.

Oh, absolutely having my mum come in! On that song I was referring to about Karen syndrome, I had a couple of lines where I wanted a female voice, specifically to play the part of a Karen.  I’d asked my sister and a few singers from Newcastle where we recorded the EP, and they all happened to be unavailable at the time. My mother is an evangelical Christian, and she’s always looked at my career path with a furrowed brow and a discerning taste (laughs). Rock and roll isn’t for the innocent, after all.

But she said if you need a hand or anything feel free to give me a call, and I’ll help you out. She ended up coming in, and the engineer Mitta Norath, who did a fantastic job on the EP, helped me set my frail 5’3 mother up in front of a microphone with cans. She was completely a fish out of water, but she nailed it on the first take! Mitta and I were screaming at each other through the plexiglass in the studio. We just couldn’t believe the magic and how she’d put the lines down. I can’t wait for people to hear it. Anyone close to us that’s heard it, and who knows my mother, has been completely dumbfounded. Honestly, it’s like if Bert Newton joined a thrash metal band (laughs). It was lightning in a bottle and easily one of my favourite moments. And having my mother on something I’ve recorded is pretty special too.

We’re jumping back in the studio at the end of the year, hopefully, to do another EP.  The material is flying thick and fast, the stuff we’ve written hasn’t even been COVID/lockdown based, and there’s a lot to unpack and discuss there. We have a lot of exciting things in the works and have been getting some attention overseas too, so hopefully, when lockdown lifts, we’ll be able to take advantage of those opportunities.  Many people have dug not just our music but what we stand for. We’re very excited for what the rest of the year brings, and as soon as we can, we’ll be playing some very loud shows. Oh, and lastly, follow us on TikTok! We’re very silly there, but we’re enjoying making videos.