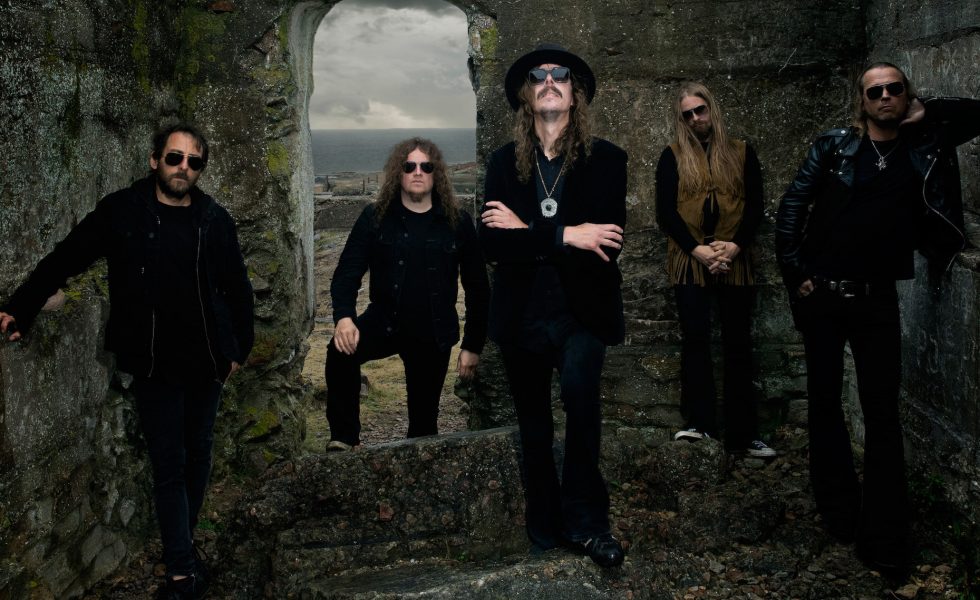 If you take away a bear’s growl, is it still ferocious? Imposing? Opeth’s growl is so ten years ago. Their music is as intriguing and beguiling as ever.

Talking to now veteran guitarist Fredrik Åkesson, the growl is a mere instrument in an entire orchestra of sounds and textures. Knowing your chords backwards and upside down is for lesser bands. If you’re in Opeth, you’re expected to arrange songs for Mellotron, organ, strings, three basses—and then translate them back and forth into Swedish and English. In Cauda Venenum (Latin for Poison the Tail) might be the Swedish former-metallers, now prog-rockers most ambitious outing yet. Fredrik delves into just how much work was put on his fret-bound fingers for this, their thirteenth album.

Hysteria: Let’s talk about the new album, In Cauda Venenum. The most interesting part is that you’ve put out a Swedish and English version, which reminds me of a rock band called Kent. They did that all the time.

Fredrik: Yeah, he just wanted to release two different versions for the hardcore fans. No, actually, I think the main reason is because he wrote the album in Swedish, like the lyrics, the contents were written in Swedish and it was something he felt he wanted to do at an early stage so, before we went into the studio, there was only one version of the album, that was the Swedish one. A lot of words could be directly translated but he had to alter some words apparently. And of course the melody will change a little bit because of the different words and stuff so…but, yeah, I think that something about the lyrics that was more difficult to write Swedish lyrics than coming up with the English ones. That’s at least what he told me and that was kind of the seed for the album that he wanted to do, the Swedish lyrics. I think, personally for me when I listen to it, I think some songs work better in English and some in Swedish. The ballad… what’s it called? The Lovelorn Crime, that one, actually I think is a little bit better in Swedish. It’s a matter of taste.

A lot of bands sing in their native language, and it sounds fine. Of course the meaning gets lost. Was it important that you get the story of the album across? There’s definitely a narrative there.

Yeah, absolutely. I thought immediately when Mike brought up the idea, “Oh we have to do this, we can’t just put out the Swedish version, we have to do an English version.” So, I was delighted by that. The contents of the lyrics come across as well in the English versions I think. It’s just, maybe one word here and there we have to alternate a little bit but the basic stories are in there the same.

As for the music…is there any instrument you didn’t use on this album?

It was a fun recording because we really went the extra mile I think. We didn’t spare an expense on anything like using any software, keyboard trans or anything like that. It’s all the real deal. And the fact that we recorded in this Park Studios, which actually was owned by the band Kent! One of the guitar players.

This will impress no one but me.

And also different basses and drums and, we used a vintage Ludwig kit from early 70s. And we brought in the Hammond B3 with the Leslie and the pedals and original Mellotron and also the strings were recorded by Dave Stewart in the UK with a 21 piece string orchestra so there’s quite a lot of those in a few of the tracks, which you probably can hear. I think it just creates a more organic tone to everything to use the real deal instead of using programmed stuff, you know. Technology has come very far these days but I think, also the fact that we recorded this album we had a goal. We were supposed to play all the songs together as a band in the rehearsal room before we entered the studio, which we haven’t really done since Watershed.

Wow, over a decade ago!

So that was really good for us to do, that we play all the songs from beginning to end and that made us put a lot of time in the studio too, finding which bass are you gonna use for the track, which guitar, which amp? That’s the most time consuming bit of recording, as long as everybody knows their part well, which we did in this case. That was really fun to do. The Heart in Hand track that was released on YouTube a few weeks ago. Man, it’s a pretty aggressive track, but me and Mikael are using Fender Mustang guitars with single chords but they sound the most brutal. Martin Mendez is using an Old Paul McCartney Hofner bass. Shit, that one sounds the most aggressive of all these different basses we have here. So it was really fun and it was good for the album because every song has their own frame to fit all the frequencies and instruments in. They’re all quite different so there’s a lot of different instruments on it.

Everybody’s always asking about “will Mikael growl?” The thing is, is that his growl is better than ever when we play live now. It’s really guttural. We really enjoy to play the death metal stuff live.
[FREDRIK]

It did remind of those 70s sort of bands like, Deep Purple, Camel, King Crimson, where it’s not just about the notes but what you use to make them. It’s almost like all the songs are mini albums with all the different instruments going on.

Every song has their little life and went in one at a time basically.

You said you recorded a lot of solos for this one, how was solo duties split between you and Mikael this time?

I got to play a lot of solos in this one actually. So I play the first one In Dignity after the speech; I play the solo in Heart in Hand. Michael plays the lead solo in the fourth track, Next of Kin. Then you have the ballad which has this long David Gilmour-ish (Pink Floyd) solo, Lovelorn Crime, I play that one. Mikael plays those kind of things, but he gave me a bit of pressure because I did the demo for it. “I want you to play a solo that people will remember you for when you die.” It’s like okay, thank you for the pressure. So that was that. And then the other track, Charlatan, which is quite interesting because, on that particular track, Martin Mendez plays the bass but there’s actually no guitars on it. It’s me and Mikael play lead bass, right on top of it with lots of distortion. We play through guitar amp with the full distortion basically. Because we didn’t want to sound like a new metal track, you know, so that made it a bit more grittier and dirtier, so if you play that live we have to bring up—we’re going to have to have three basses on stage with lots of distortion.

Actually, Continuum, the ninth song, wasn’t going to be on there because the album is sixty-seven minutes long, a bit more actually. But me and Martin Axenrot [drums] were, “it has be in there, it’s this good for the flow of the songs.” We got our way with that one.

It’s interesting you say that it’s over sixty-seven minutes when CD is seventy-four. Vinyl on the other hand is what, 20 minutes a side? Unless you want to issue three LPs…

I’m excited that you know that fact about the vinyl.

That’s what we were thinking about because we want to put out double vinyl with sixty-seven minutes. So, you always think about which track is going to be the first on the second vinyl. Now in this case, it’s going to be Charlatan, which is the bassy track, the heavy track, which is good. If we would have put more music on we couldn’t do—yeah, we would’ve had to have three vinyl LPs and that’s a bit too much.

And shipping to Australia would be—I don’t even want to think about it.

When you joined, Opeth was transitioning from death metal stuff to what you’re doing now. Is Opeth a band that is constantly evolving? In ten years if you’re still doing this, and you’re still game, do you think Opeth will be a completely different band or have you sort of settled into a groove? What do you think the future will hold?

Develop, I think that’s one of the driving forces behind the band. Also, for Mikael, who writes the majority of the stuff, he needs to try to do something different to top himself every time. I think this album is, in a way, a bit connected with the last three studio albums. But it also has something new to offer. And, I think we don’t really know what’s going to happen next time. It definitely will be something different again but also I think we keep some kind of thread, open thread still. You can find parts on this album which you can date back to the death metal era as well if you listen. It’s just performed in a different way. Like some riffs and parts could have been in a death metal song if you played just on heavy guitars. Everybody’s always asking about “will Mikael growl?” The thing is, is that his growl is better than ever when we play live now. It’s really guttural. We really enjoy to play the death metal stuff live. For me, personally, I think now when we planned the later stuff with the older stuff it creates an interesting live set in terms of dynamics.

Which he’ll do in Australia, yes?

Yes, we’re happy about that. It’s quite soon, in December. We’re doing the European tour first now and then we’ll play a show in India. And then we’ll play three-two shows in Japan. And we’ll play some in China as well. Interesting times ahead.

Catch Opeth at the following dates: