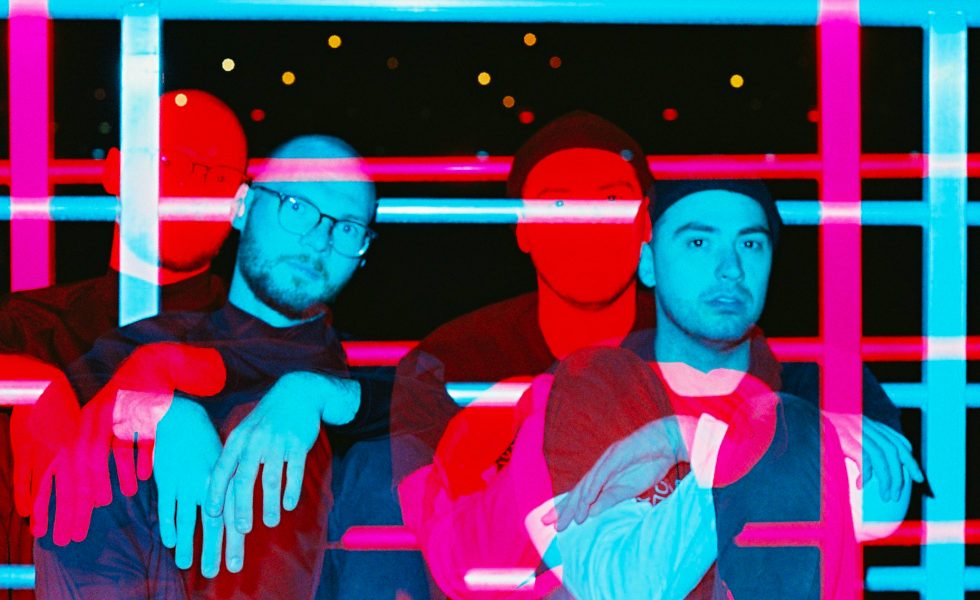 ONSLOW // Creation Out Of Destruction

The duo, featuring Make Them Suffer frontman Sean Harmanis and Voyager guitarist Scott Kay, came together last year, and amidst the chaos of the pandemic, they’ve been able to create something pretty special. Their self-titled debut EP is a stark change from the sound we’ve come to expect from their home bands; so we wanted to find out all about it. Following its release, we caught up with the band for a chat.

Sean: I got a guitar lesson from Scott many years ago, and that was the first time we hung out one to one. I think I started playing the guitar back in 2016. I found it easier to write chorus vocal melodies in Make Them Suffer by strumming along, singing and working it out that way. From there, I developed my interest in guitar, and I got the lesson from Scott. I started writing songs eventually. I think Let Me Rust was a song I did a few years ago. I only decided to show Scott right before Onslow formed in 2020. We pretty much formed as COVID hit.

Scott: Yeah, I think I was on school holidays. I was sitting on the computer, not doing anything, and Sean hit me up out of nowhere with some demos. He asked if I wanted to try workshopping them together. I loved the ideas, and it was a genre of music I’ve always really liked but never really had the opportunity to work within. It was nice to come at it almost as a producer rather than exclusively as a from-scratch songwriter.

You both come from different projects, so what was the dynamic like when you first jammed together?

Scott: It was chilled.

Sean: Yeah, we didn’t think too much about it. We were very productive. We’d only be able to book in two hours a week, so we’d just come in and do as much as we could. We could take a song almost three-quarters of the way to completion in that time. As soon as we’d start to get brain fog, or when we needed a break from the track, we’d call it there.  It was a lot easier to work together than I think we both expected. I was looking for Scott’s criticism and input, and for him to add a different spin to my ideas, so it was a really open creative session.

Scott: Sean would come in and ask me if an idea was shit. It was that clean-cut. It was quite an easy working relationship. I think that’s why things slotted together so quickly and effortlessly. We were able to get a lot done in a short amount of time because we were on the same wavelength. I knew what Sean wanted to hear and vice-versa. We both heard where the song should go, rather than feeling like we were butting heads. That let us go that step deeper and dig into the nitty-gritty.

You’ve talked about giving little thought to the actual lyrics of the EP. We’d love to expand on that a little more.

Sean: It’s difficult to say. I just really didn’t think too much about them. It was more about the melodies or the sounds of the words themselves. I’d write the songs and then do some very scratch lyrics and vocals over them. Then, I’d go back and find words that sounded like each other, and that’s what the lyrics ended up being. I don’t know how much sense they made (both laugh), but I think that’s an important part of treating vocals like an instrument—just focusing less on the lyric meanings and more on what the vocals add phonetically.

Scott: I know Devin Townsend does that a lot. He’ll hear a sound from the vocals that suits the music, and he’ll play with that.

Sean: Over the past couple of years, that’s how I’ve started writing my Make Them Suffer lyrics as well, just singing along to some sounds, figuring out what the phonetics are and filling out the words. That’s just a style of lyric writing I feel comfortable with. For me, this project was about showcasing some kind of singing ability and pushing myself in terms of songwriting, particularly with the guitars and instrumentation.

It was terrifying for us to put this out, but it’s been super cool to see so many different projects come out from this horrible pandemic. It’s been a great time to be creative and express oneself. I encourage everyone to do the same. I’m keen to hear what else will come from this.
[ Sean Harmanis ]

Scott: It’s great. I’ve been working with him for years; he’s one of my oldest friends.

Sean: They’re in a D&D campaign together [laughter].

Scott: That’s how deep we go [laughs]. He’s a fantastic guy to work with. He’s so open, honest,  and super-efficient. He’s recorded Voyager’s music for quite a few years now, so because we’ve worked together for so long, the process was super cruisy. He knows exactly what we want, but there’s always room for creativity as well. Matt likes to interject and put his two cents in on how something should be recorded or whether he can hear a harmony. I think his ideas have a lot of merit, both with songwriting and with what he’ll do when it comes to mixing.

Sean: I’ve also done a lot of recording with Matt and have known him for a while. He’s a guy that started out doing a lot of heavy metal and hardcore bands. He’s very familiar with that production style, but he’s also recorded Sly Withers’ last two releases and Pot Plant House Party. He’s familiar with a more raw, rocky style of production too. It’s pretty day and night, what you’re going for with mix and production style in a rock release compared to a metal release. Metal has very clean tones, but rock music can be about letting the imperfections shine through. Us coming from the metal background and having him have the perspectives from both sides of the fence was really important.

There’s such a broad scope of sounds on offer on the EP, so where did you find your inspiration?

Sean: I just considered the EP to be a blend of all my favourite bands from high school.

Scott: It’s a nostalgia fest for both of us.

Sean: Yeah, there’s influence from bands like Deftones, The Smashing Pumpkins, Radiohead, Placebo, The Pixies, Weezer… We actually referenced Weezer quite a few times on the EP. On Freddie Mercury, we were referencing a bunch of post-rock bands like God Is an Astronaut. When we worked with Temp, he said the EP was like polished garage rock [laughs].

Scott: It’s like the idea of us reliving our youth but having more money to buy real equipment to play the music.

What’s one thing you want people to know about/ take away from the EP.

Scott: For me, it’d be the sense that we feel free to do whatever we want with this project. Having such a mix of sounds on our first release shows we’re not trying to pigeon-hole ourselves too early. We’ve both come from bands that almost have an obligation to sound a certain way, so Onslow’s given us both the chance to be a bit more experimental. Moving forward, don’t expect us to release something that’ll sound similar.

Sean: It was terrifying for us to put this out, but it’s been super cool to see so many different projects come out from this horrible pandemic. It’s been a great time to be creative and express oneself. I encourage everyone to do the same. I’m keen to hear what else will come from this. And it’s not to say we’re treating this as a COVID project or a side project. It’s just another band for us, and we’re excited to see what the future will hold. We’re open to anything.