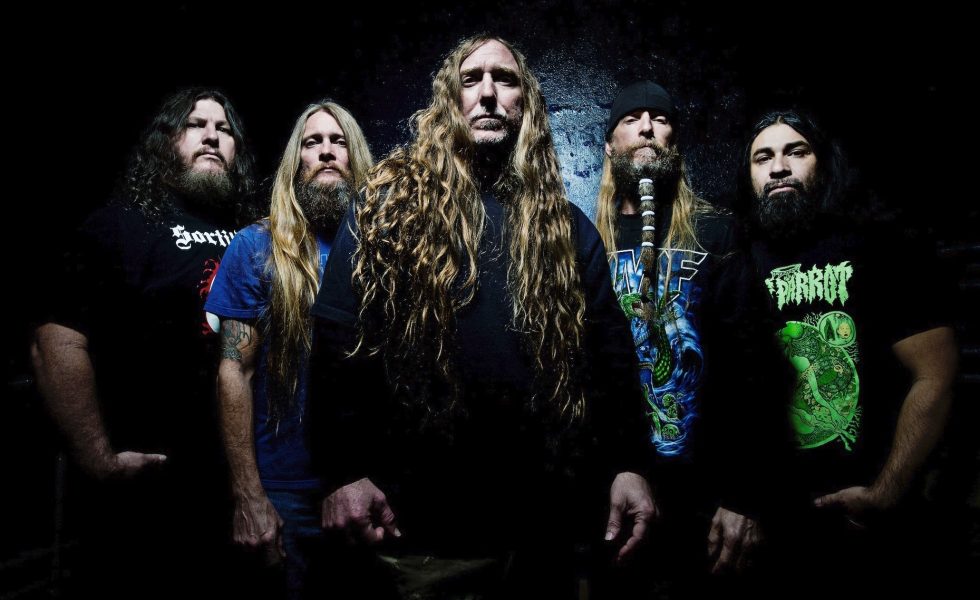 In late 1990s Florida, a small extreme music scene had begun to build, centered primarily around the mid-state Tampa Bay area. In just a few years, it would become one of the most important metal movements of the coming decade, as the bands it spawned helped to lay down the cornerstones of the modern death metal genre.

One of those bands was Obituary, who had originally formed as Executioner in the early part of the decade. In 1989, only a short time after adopting their new name, the fledgling quintet released Slowly We Rot, an album full of pummelling guitars, odd tempo changes and marked by the singular, otherworldly growling of John Tardy. His apparently wordless vocalisation gave the band a trademark sound that set it apart from the other acts bubbling to the surface at the time, bands like Deicide, Morbid Angel, Death and Malevolent Creation.

“When you look at the different scenes,” Tardy theorises, “whether it’s the Seattle scene or the thrash scene or whatever it might be, there’s a lot of bands that come out, and there’s a lot of good bands, but maybe they all do have a common thread about them. But when I listen to Deicide or Morbid Angel, I don’t think it has anything to do with Obituary. It’s kind of cool. I remember back in the day, it was kind of a sense of like you’re all out there playing football and kicking the ball around—the better the kids you’re playing against in the neighbourhood, the better you become. As the competition rises, it makes you work a little harder, dig a little more deep and you get in there and you want to make something even heavier.”

Cause of Death was the perfect example of kids at play. Every delay, every effect. We really went nuts with all of the stuff. It was fun. It was cool for us.

That, of course, is precisely what Obituary did. With Death’s James Murphy taking the place of founding guitarist Allen West and Frank Watkins joining on bass, Obituary created Cause of Death at Morrisound Studios, a facility that would become so associated with death metal, bands like Cannibal Corpse would move to Florida just to make records there. The new studio, an upgrade from the one where they had recorded Slowly We Rot, allowed them to put some of what they’d learned from their previous session into practise, and more.

“Cause of Death was the perfect example of kids at play,” the singer recalls. “Every delay, every effect. We really went nuts with all of the stuff. It was fun. It was cool for us. When I said we were young, we were: we were green. Slowly was a complete the deer-in-the-headlights look. By the time we did the second album, we were so excited, we started coming up with all those intros between the songs, everything was like – ‘Hey, look at all these sounds you can do in the studio!’ It was awesome.”

With longer songs and benefiting from the eerie technical lead playing of Murphy, Cause of Death is now considered one of the landmark recordings of early death metal. To mark the album’s 30th anniversary next year, Obituary will be performing it in full on tour, including their Australian shows. The band has never played some of these songs live until very recently, when the idea was floated. Tardy admits that it was weird to have to go back and revisit them, and figure out what they were doing all those years ago.

“It wasn’t really challenging, but it was a little surprising because, honestly, we don’t sit around and listen to our albums a lot.” He laughs. “That doesn’t happen! It’s been a long time since any of us have really listened to them, and that album doesn’t really have any actual lyrics so it was a kind of challenge to go back and redo those parts! So it was a little bit weird, but also kind of like riding a bike, once we got listening to them. The other guys had to work out what note they were hitting and it all just fell into place pretty quick for us.”

For Tardy, it was about finding the vibe again. “Once I was back into listening to the music and the rhythms again and feeling the flow of it, it just felt like I came back to what I was doing. It fell into place pretty quick for us,” he says again. “It felt pretty weird at first, but once you play them a few times it came back to us, and it kind of got us going again.”

The vocalist’s idiosyncratic early approach presented its own challenges when it came to reproducing it 30 years later. He seems to still be at a loss to explain his own motives behind the wordless vomiting that serves as vocals on those pioneering Obituary releases.

“I have no idea, man!” he says with a sigh. “It wasn’t really by design, I guess. That was so early in our career … I don’t know, it’s just kind of the way it came out. I was happy with just the way it sounded and what it felt like, just doing it and not worrying about if I had to actually come up with an actual word or an actual sound … just feel my way through it and let the music take me where I wanted to go, and if that meant not actual lyrics but noises, then I didn’t have a problem with it.”

Looking back, it probably came down to youthful invention and wanting to create something unique. Cause of Death contains a Celtic Frost cover as homage to their first major influence. Back in the 80s, Tardy says, “there wasn’t really a lot of metal that was influencing us back then”

“It was a different time. You had to find magazines to read and there was only tape trading to show people your band. Nowadays, God help trying to get an album done without someone hearing it. It just doesn’t happen! It was a much smaller world back then. We were all very young, still in high school when we started writing and we never toured with Slowly We Rot. It was only after that we started working on touring the world, and seeing bands and getting the feel for what was happening. We were pretty sheltered!”

OBITUARY with guests Wormrot performing at: