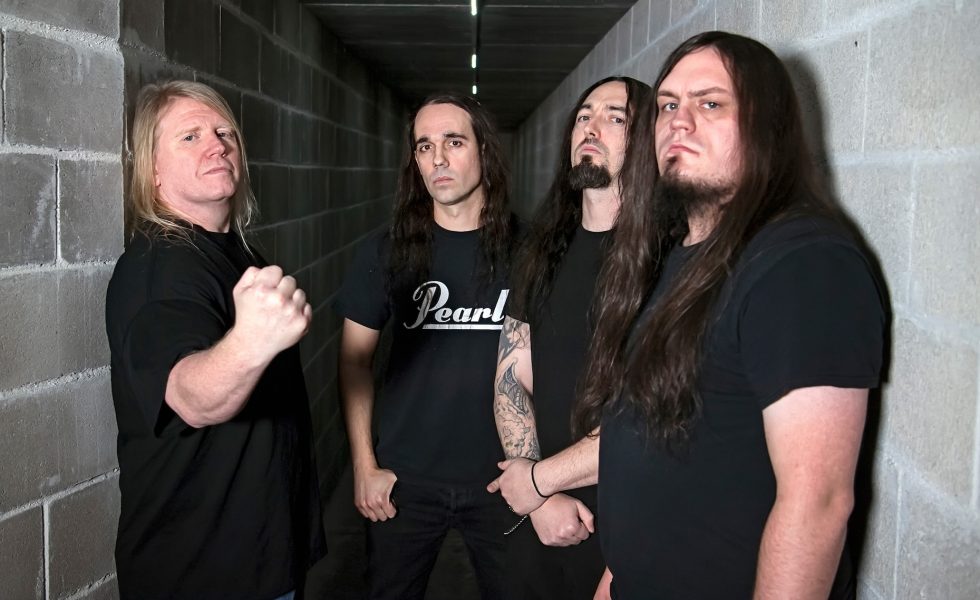 Technical death metal doesn’t get much more intense than Nile.

The American purveyors of ancient mysteries in the script of mind-entangling guitars and complicated time signatures are set to release their ninth studio album, Vile Nilotic Rites. This thundering album has not only been a significant time in the making, following from 2015’s What Should Not Be Unearthed, but also traverses a lot of water under bridge as Nile looks to it’s future with a scorching revised line-up.

“I think in everyone’s opinion, everybody in the band, this is the most important album for us,” Nile’s longstanding drummer George Kollias says, “we spent more time than ever with preproduction, everything, it took us about a year and half of recording and mixing this album. There were many changes that make this album really important, for example we have Brian [Kingsland] our new guitar player, he contributed four songs on this album, I did the same, Brad [Parris, bassist] did the same, and Karl [Sanders, vocalist and guitarist] of course as always the bigger part. So this is the first time we actually worked more as a team. That was very, very important. We also have Mark Lewis [at MRL Studios, Nashville, known for his work with Belphegor, Fallujah] doing the production, so can change what we do, so many things. The result is obvious, I think.”

Nile’s characteristic fascination with the Near East and ancient history has again manifested musically in Vile Nilotic Rites, with tracks like That Which Is Forbidden and Where Is The Wrathful Sky displaying a very ‘Eastern’ sound. In particular, the huge, primal-sounding drum patterns in Where Is The Wrathful Sky really stand out. “Ah, Where Is The Wrathful Sky…” Kollias reflects a moment, saying, “this is a song I wrote, the middle part with the percussion is totally Eastern, which kind of reflects the Greek culture in a way, so this music is inside me, you know, I wanted to add a little bit on that song, a little bit of the Eastern vibe. But I think it’s something that Karl always liked.

“I think that the vibe is similar to all the rest of the songs. We spent a lot of time practising, going through the songs over and over again. We wanted to explore new things so I took a lot of influences from other styles, like gospel music, you know, some of the best drummers are there today, so I wanted to do something a little bit different to the usual death metal albums that people will listen to every day. So we spent a lot of time with other styles of music, and tried to incorporate some of their stuff into our music, but not lose the aggression, and obviously not speed. But I’m really proud, actually, of these little things, and when we played these songs live, I think it’s the most fun song to play, so maybe next time we will push a little bit more.”

We push but it’s not an album for just musicians, though there is huge musicianship in there. Its still an album for every fan.
[GEORGE]

Vile Nilotic Rites certainly is impressive, so how does Kollias feel that this album has ‘pushed’ him, or challenged him musically? “Well, not speed,” Kollias laughs, “I think the song structures. There were a lot of challenges with drum fills and getting parts together, there are some super fast and really complicated time signature songs like Seven Horns of War, an impossible song to play, Revel In Their Suffering is another one, also Handbook [Oxford Handbook of Savage Genocidal Warfare], so I think this album pushed me on every aspect, having a new producer this time, … I knew we were going to change, going to a new producer, hoping to make it better, hoping to deliver better production, and I am extremely happy with how this whole thing has worked.”

There sure are a lot of details in this album, and in some tracks, such as Seven Horns Of War, there are grand-scale overtures and the time signatures are insane. On the process of piecing all these intricacies together, Kollias says, “We always wanted to keep the ‘epicness’, we wanted to keep all these epic parts. When it comes to music, and this is the reason me and Nile have been together so many years, it is a lot of fun to work with Karl, because I really want to push to the limits, and he wants to do the same. So it’s not the typical 4/4 death metal, and sometimes we overreact a little bit with the time signatures, even when we have like a 13/16 or 17/16 or whatever the most crazy signatures that you never meet in death metal, I think that there is a point and a pulse, there is still groove, even when it gets really, really complicated there is still a lot of catchiness.

“So what we really try to do is push ourselves, practice more, become better musicians, but most of all make quality music, which is the dream of every musician, but we never stop pushing, and I love this with this band. We push but it’s not an album for just musicians, though there is huge musicianship in there. It’s still an album for every fan.”