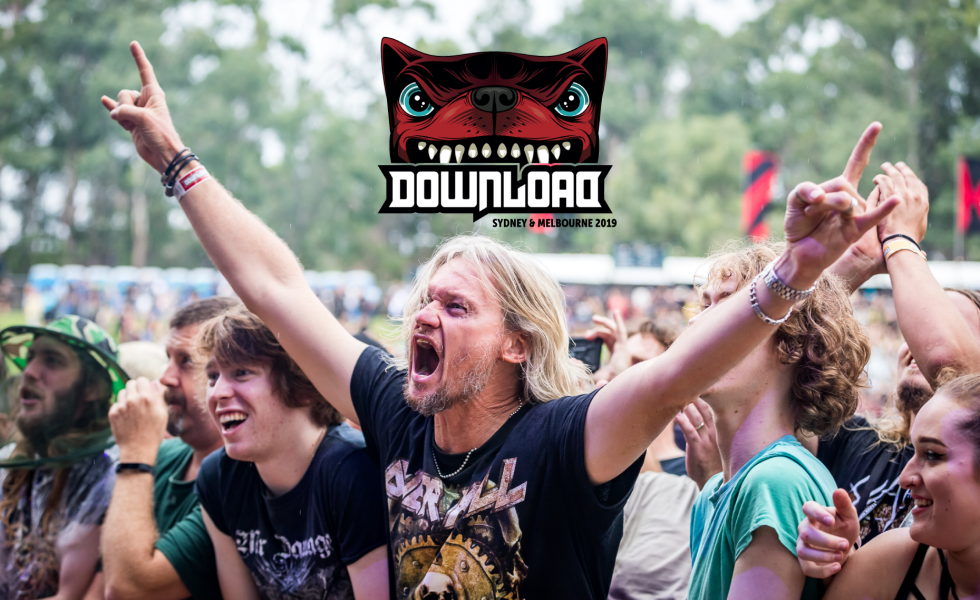 After months of clued in line-up speculation, fake-poster circulation and, uncertainty, metalheads, moshers, and misfits alike can finally rejoice in the knowledge that blast-beat Christmas will make its third ever appearance down under.

Mirroring 2019’s format, the (arguably) loudest festival in the country will make its way to Melbourne’s Showgrounds on Friday March 20th and Sydney’s Parramatta Park on Saturday March 21st.

The first lineup announcement will drop at 8.30am, next Wednesday, Nov 6th – we highly suggest setting your alarm to a breakdown of your choice to ensure you catch the news early.

Last year saw the likes of Slayer, Ghost, Judas Priest and Anthrax satiate the hunger of Australia’s heavy music community, with a slew of locals including Eat Your Heart Out, Justice For The Damned and The Beautiful Monument showcasing the exceptional homegrown talent on offer.

The overlords at Download HQ have been particularly tight-lipped regarding all info surrounding the festival this year, propelling the rumour mill into overdrive. With both 2018 and 2019 delivering a stunning combination of acts, it’s simply fair to assume we’ll be thrown into complete disarray upon reveal.

Unfortunately, maggots will now have to rule out the possibility of Slipknot appearing as the date for Japan’s Knotfest run overlap with Australia’s Download weekend.

Unfortunately, maggots will now have to rule out the possibility of Slipknot appearing as the date for Japan’s Knotfest run overlap with Australia’s Download weekend. It’s also highly unlikely Metallica will make an appearance with frontman James Hetfeild’s current road to recovery taking priority. Unfortunately Japan’s Knotfest run also rules out antichrist superstar Marilyn Manson, who hasn’t made an Australian appearance since Soundwave 2015.

The Download UK 2020 line-up currently boasts the likes of System of a Down, Iron Maiden, Deftones – all of who are due for an Australian visit.

It’s likely Australia’s run of shows will mimic the lineup in some way, with Slayer, Halestorm, Me First And The Gimme Gimmes, Behemoth, Anthrax, and more all taking on double-duty across the pond.

It’s been a long and painful 8 years since System of a Down’s last visit to the country as part of the Soundwave 2012 run, so it’d only be fair for the legendary group to grace us with a tour soon. Alt-metal leaders, Deftones’ last trip was in 2016 off the back of Gore, and with the band gearing up to release new music in 2020, a Download appearance wouldn’t be too far off the cards.

The UK’s 2019 line-up also boasted the likes of Lamb Of God, Dream Theater and Rob Zombie (who’s eyeing a 2020 album release), who are all primed with Download shaped holes in their schedules for March 2020.

With prog-masters Tool riding off the high of Fear Inoculum, it’d be a triumphant and welcomed return for the band.

Metal up and comers Employed To Serve, Vein and Venom Prison could potentially help fill out the early-afternoon sets vacant in the schedule with debut Australian trips. Pop punkers, WSTR, ROAM, Trash Boat are all also due for Australian runs, having yet to visit off the back of their 2018 album releases.

Try not to dizzy yourself with anticipation in the lead up, but check back here next Wednesday morning for the lineup announcement and additional ticketing information.

END_OF_DOCUMENT_TOKEN_TO_BE_REPLACED

The year is 1888, the island of Obsidian serves as a refuge for free thinkers …

To celebrate the release of their stellar new single We Independent, guitarist Jimmy Young walks …