NAKED GIANTS // Out Of The Shadows 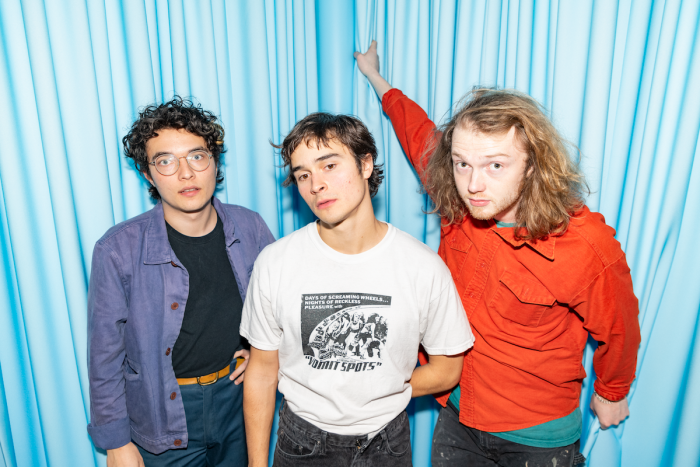 It’s been a landmark couple of years for Naked Giants. Following the release of their debut LP Sluff, the trio hit the touring circuit with Car Seat Headrest, even performing at the iconic Madison Square Garden—not bad for a bunch of guys in their early 20s!

Somehow, they found the time to work on LP2, The Shadow. We caught up with drummer Henry LaVallee to chat about it all.

Hysteria: Your last album Sluff dropped a few years ago. Tell us about what the band was up to between the release of that and this new record.

Henry: After Sluff was released, we began touring with Car Seat Headrest, opening for them as Naked Giants, and then also performing with them as auxiliary members, filling in on percussion, keyboards, and guitar. We toured very frequently, averaging three weeks on the road of every month, for about 18 months. When a CSH tour would finish, Naked Giants would be right back in the van to do our own slot of dates in more intimate clubs across the country.

So lots of touring, putting miles on our Ford E-350 van, breaking drumsticks, eating Taco Bell, and seeing the world. When we stopped touring with them, we all began teaching music more and always rehearsing when we had the time.

How did you find balancing Naked Giants and playing in Car Seat Headrest?

We played a lot of games. We played card games and board games backstage like Settlers of Catan, Shithead, Hearts and Kribbage. It was overwhelming at times, but the card games and sense of professionalism that that level of touring brings, made each day seem like we were just working the world’s best job.

We have to write about these themes because that is our way of making sense of it all. Some people paint, or run, or cook, or read, or have a conversation, and we write songs.
[ Henry LaVallee ]

Tell us about some of the sounds or bands that inspired The Shadow.

Everything from Black Sabbath, to DEVO, to Talking Heads, to Jesus and Mary Chain, to AC/DC. There was a tape machine in the studio that Gianni (Aiello, bass and vocals) made a great atmospheric loop on, it is prominent in Turns Blue but I feel like that sound really set the tone of the album for me.

Tell us about the recording process.

We had a large sheet of poster board with about 25 song names on it. We said, which of these songs tell a continuous story, and how should we arrange/track them? We found the top 11 songs that we all agreed fit in the universe of “Naked Giants- The Shadow”, and we began tracking. We would do live sounding drum and bass takes, and then there would be overdubbing/splicing when necessary. Chris Funk would bring his dog (Pengu) into the studio, and Pengu’s presence was always a happy vibe.

You worked with some big names (Chris Funk, Adam Lee and John Baldwin). What was that experience like?

They kept us creative, they kept us tenacious, and they kept us at peace. Chris and Adam are so good at making me feel confident in my abilities as a musician and human. I was messing around with a synth sound and I was really timid to ask everyone if I could add it into the song, and Chris was like “Don’t be afraid of your feelings.” Basically saying, if you feel it, then it is worth sharing, period. I loved that, that really opened my eyes in the studio about how to bring out more of myself onto a record.

This record is said to be a series of “vignettes of light, shadow, anxiety and responsibility”. Was it difficult to write and sing about those more serious topics?

I wouldn’t say it was difficult like calculus is difficult. These are just the themes that come out subconsciously when each of us decides to pick up a guitar and write something. There is a responsibility in having a microphone and big money distribution, there is anxiety that we will not be perfect, or reach impossible standards, there is darkness and brightness in our pasts and futures. For us, writing songs with these themes seems not difficult but necessary. We have to write about these themes because that is our way of making sense of it all. Some people paint, or run, or cook, or read, or have a conversation, and we write songs.

What are your favourite tracks from The Shadow?

I love High School, Unpeeled, The Shadow, and Song for When You Sleep. I am proud of this album because of its depth, its flow, and because it reflects the three of us, and everybody who has had a hand in supporting us all along the way.

It’s no secret the band loves touring, and this album just begs to be performed in a live setting. Was it hard putting out this album in a time where you can’t support it with shows?

Yes. We had basically been training for this tour for the last two years, we stopped touring in September of 2019 to build up anticipation for this album’s tour cycle. Personally speaking, I associate a lot of who I am with being on the road. I love the adventure, the unknown, the hard work, long drives, heavy lifting, new friends, old friends, and most importantly-playing drums in front of people. I miss being the heartbeat of the mosh pit. I took it for granted. Every show I told myself I was lucky to get to be a touring drummer for a living. I can’t wait to get back.

On the plus side, we got to make some really fun and stylised music videos while we were home, and I think that that did add to the album’s universe. I know we all look forward to playing live again.