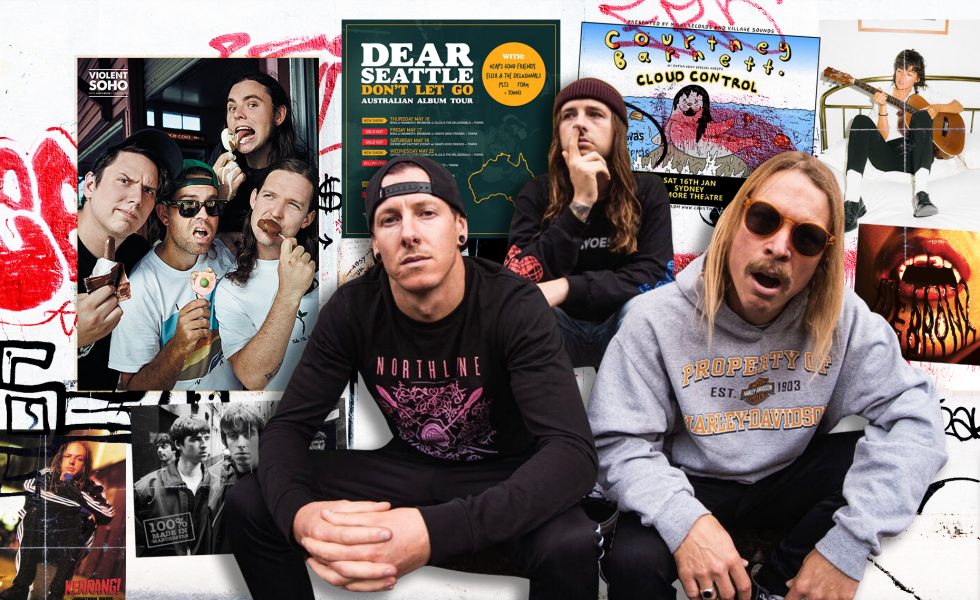 KICK OUT THE JAMS With The Dead Love

We asked Sydney rockers The Dead Love what kinda jams they dig—being stuck in a van with these on play would be not a punishment at all.

MORE: THE GHOST INSIDE: Coming Back Swinging // KICK OUT THE JAMS with Stepson REVIEWS: AVERSIONS CROWN: Hell Will Come For Us All // BOSTON MANOR: Glue // EBONIVORY: The Long Dream I // PALAYE ROYALE: The Bastards // JUSTICE FOR THE DAMNED: Pain Is Power // THE GHOST INSIDE: The Ghost Inside

The Dead Love and friends are here to kick the social distancing blues with their isolation anthem, My Friends. The new single and music video sees the band enlist the help of their dearly missed mates to sing the final chorus–a feat accomplished from the comfort of each participant’s home. Members of Stand Atlantic, Yours Truly, DZ Deathrays, RedHook, Bakers Eddy, Teen Jesus & the Jean Teasers, Columbus, and more join in solitary solidarity, belting out the clincher: “I miss my friends, and I miss how it used to be.”

I remember a mate showing me Korn when I was a grom, when it fist kicked into that riff I was just as excited as I was confused, I’d never heard anything so sludgey, groovy and heavy! But what was confusing was the sound of how low the guitars were, I thought they were out of tune at first…… but that feeling of confusion quickly turned into absolute admiration and instant influence, my jaw dropped and I was like who the fuck and WTF is this!?? The modern heavy genre owes a great debt to Korn, they’ve had an unquestionable influence on a massive amount of the heavy stuff you hear today (let’s just start with the 7 string guitars as an example to back that statement up)

Deftones were defo a game changer for me, I think it was My Own Summer (Shove It) that got me into them first but Knife Party was the track that has made them a regular revisit. Few bands blend heavy and melodic so effortlessly, and stay true to their sound throughout trends … DT have for sure!  Oh and the clip for this tune freaked me the fuck out haha and they’re still putting out great music.

Song speaks for itself, The Bronx are the epitome of modern punk in my opinion, raw, heavy, fun and always to the point—they always make me wanna drink a thousand beers and jump around like a madman! This song was the song that crossed me over into listening to a lot more punk. Seeing them at Sydney’s Annandale Hotel (R.I.P) ages ago (fun fact supported by Violent Soho) still remains one of the best rock shows I’ve ever been too … BRONX FKN RULE!

So I’m going to go on a bit of a home turf theme for my picks firstly cause I think we have some of the best frickn bands in the world and also I think in the past Australia have had a little bit of the tall poppy syndrome which seems quite the opposite now which is so sick! Anywayssss my first pick is Violent Soho’s Covered In Chrome. To me this is an important one because I believe they were (in my eyes) solely responsible for making Rock music cool again since Silverchair, Grinspoon & Magic Dirt in the early 2000’s. A few of us went to see them play at the Annandale Hotel in Sydney play just after they’d released Jesus stole my girlfriend. Show was epic and yeah the rest is history.

Next up is Dear Seattle’s I keep Dreaming for two reasons. Just before their album came out I met Brae (the singer) which happened to be at the Loser launch in Sydney (sorry I don’t mean to name drop but this is the story) after the show finished there was kick ons at a bar in Surry Hills. After talking for ages everyone had bailed home and we were pretty much the last two at the bar left it was pretty late for what I can remember. The one thing that will stick with me forever that we talked about was loosing our fathers early on in the piece. I hope he doesn’t mind me saying this, but yeah the song is about that and every time without fail it’ll bring me to tears, it’s powerful, sincere and the lyrics will rip your heart out.

So firstly I think Courtney Barnett is a lyrical genius and a voice of our generation especially for young Australians. I’ve chosen this banger because it’s my warm up/hype song before we go on stage and gets me frickn pumped every time I hear it!

I was very late to get on the Oasis train, I always liked their sound but I was listening to heavier music when they where in their prime, as I got a bit older I started to really understand how good their songwriting and melodies where. This song in particular has that ‘No F**KS given’ attitude that they embody and it just oozes charisma. If I was stranded on a desert island and had to listen to one song on repeat for the rest of days this would be it.

l first heard this band on tour in the UK/EU and was instantly hooked. They have all the hardcover sensibilities that I grew up listening to but with a real unique vocal approach and complex drumming which I love. Their production and drum sound makes them standout from other hardcore acts. The outro breakdown on this song is as good as it gets and with the addition of Sam Carter from Architects that’s the icing on the cake.

Biffy Clyro – Victory Over The Sun

Biffy Clyro what can I say, such an amazing, versatile and diverse band. This songs sums up their sound for me, Quiet and beautiful at times and then heavy and full of emotion. It has such a huge sound for a 3-piece, and the big chorus chants with all members belting the chorus gives me goosebumps overtime I hear it. I love the subtleties of the Scottish accent shining through that makes it sound even more unique. Upbeat versus and then a halftime chorus is where it’s at. Mon The Biff.