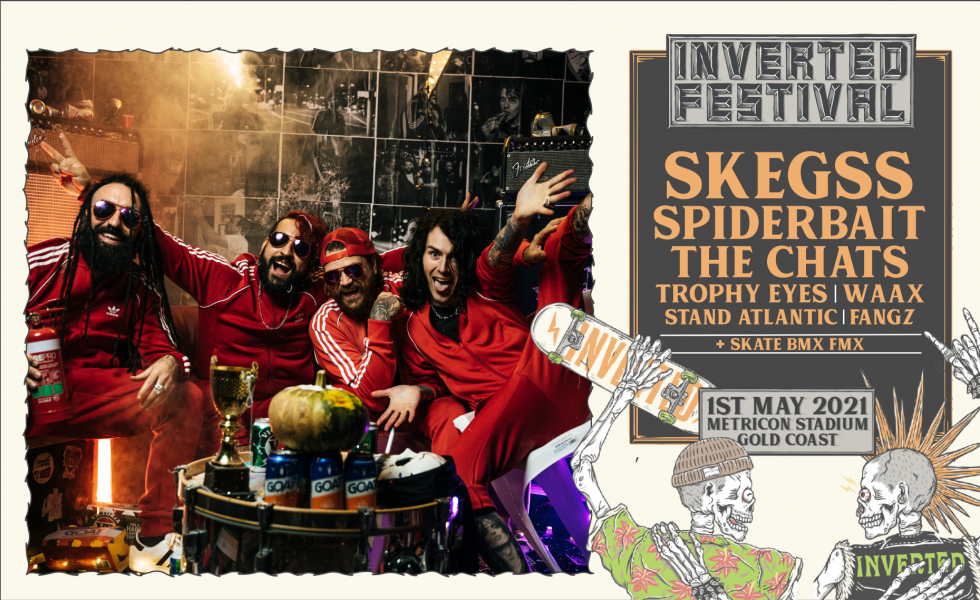 INVERTED FESTIVAL: FANGZ // Sydney Larrikins Fangz Are On Their Way Up, Bloody Quickly

“Do you know what? Our singer getting deported is an ongoing scene that we think about in this band. Currently he’s good but Josh doesn’t err on the side of caution when he gets drunk so who knows what could happen.” For Fangz, life is a party.

Having been a band for just two years, the Sydneysiders are easily one of the hottest punk rock acts in the country. Amassing hundreds of thousands of streams and getting booked for festival slots and international tours, Fangz are without a doubt on their way up. Which is why it seems so odd how perfectly the band seemed to find their vocalist and why one of the boys may eventually have to marry him to maintain his Australian residency.

“I think Josh and Woodie could get married if they had too,” laughs the groups bassist Jameel, “Josh our singer is actually from Canada.”

“He was in a band called ‘Party Cat’ over there and when he moved to Australia couldn’t find a band for two years.”

“I typed in ‘punk singer’ on Facebook on the ‘Sydney Musicians Wanted’ group and it came up with him and an ad saying he was looking to play open mic nights doing ‘acoustic folk punk songs’. At this point, Jameel is laughing hysterically.

“I clicked on his profile and saw him crowd surfing while singing at a festival in Canada and just thought, ‘this guy shouldn’t be playing acoustic folk punk.’ So I hit him up with some instrumentals and within half an hour he sent back demos of the songs.”

When asked about how it was bringing someone so new and unknown into the recording circle he responded, “I think it was actually cool because he brought his own flavour and influences which we didn’t have.”

“All of us were into Frank Carter, Cancer Bats and The Bronx but Josh would come in and show us new bands. He has a really pop based sense of melody as well which works well over Sam’s heavy guitars.”

We will definitely have a new song out before Inverted and the whole thing will be released this year for sure. We have already started writing the next record for after that.
[Jameel]

Now coming into 2021 Fangz have big things planned, especially since the release of their well hyped EP was nearly delayed.

“It was kind of weird timing,” Jameel says.

“The first single was Falling Out, which we toured and that was actually our first ever sold out tour on the East Coast and then we were lined up to do the Drifter tour and an EP tour where we went to Japan which was exciting and then everything got cancelled.”

“When that happened we just thought, there’s no point not releasing it. If we hold off a year it won’t be an accurate representation of us.”

On top of that, the lads have currently been working on another EP, which is in pre-production stages currently for release this year, but Jameel has promised some of the songs will make their way into the bands setlist at this year’s inaugural Inverted Festival.

“We will definitely have a new song out before Inverted and the whole thing will be released this year for sure. We have already started writing the next record for after that.”

Expanding on how it feels to be on the Inverted lineup he excitedly says “We are really thankful to be playing Inverted Festival with such a great lineup.”

“I was so excited when we got asked to do that. Just purely because bands like WAAX, Trophy Eyes and Stand Atlantic are bands I really like and listen to everyday. Then as well it being an all ages festival in the middle of Covid that combines skate, bmx, motocross and music together; it almost feels like a Warped Tour vibe but in the most Australian way possible.”