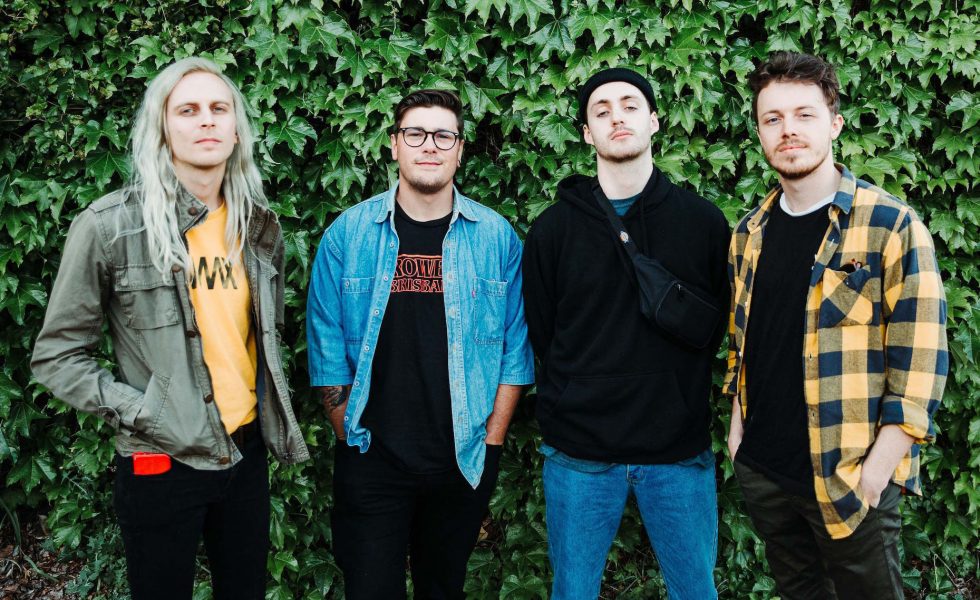 A release that when you were done, you’d feel heaps better for unloading your angst into what was coming from your speakers? For Audie Franks, La Dispute’s Wildlife would be his album of choice—that’s what Mending Breaking, the new album from Newcastle alt-rockers Introvert, might be for many.

Don’t feel ready for the day? Spin Mending Breaking. Something heavy on your mind? Listen to Mending Breaking. It’s a powerful release that deals with some very heavy inward topics, like doubting your self-worth, being on a merry-go-round of perpetual anxiousness, that kind of thing. For Introvert vocalist Franks and the rest of the band to put together a soundtrack that would support their collective experiences with such feelings was, he says, was a pretty cohesive thing.

“Because we’ve all been in a shit place in our lives, we kind of paint a picture–this is the scene. Overall the EP has the scene of self-loathing and being stuck in that shit situation where you just want to get out.

“It was kind of easy. We all had relevant lives, and writing, I don’t know, it came easy. This was a release for all of us.”

It’s like, if I can’t relate to it when I listen to it, how can I expect anyone else?
[ Audie Franks ]

Franks continues about the band’s writing methods, saying Introvert will write the music first, and the lyrics and their melody after. But when it comes to writing lyrics, though Franks is the band’s vocalist it’s not a job exclusive to him–everyone has things they want to share. “When you’re stuck, you’re not really creative, are ya? That’s when the boys jumped in and were like, ‘Yeah, we’ve got some shit we want to talk about as well.’

“This EP became a collective of everyone.”

And not just Introvert, people who’ve followed the band since their 2016 EP Spinning Heads was released have also been factored in–the themes of this release are truly universal. “We have a bunch of close friends who write music,” Franks says, keeping it casual, “We’ve also got some close mates and we’re like, ‘Hey what do you think of this?’ and they’re like, ‘Oh it’s really good,’ or they’ll be like, ‘Yeah nah, I don’t want to know about it.’”

To some extent, Franks agrees, if Introvert receive such reactions, it may be a case of back to the drawing board to work on their material until they’ve achieved the mission objective, but it might also be a rare instance of selfishness and trying to maintain their own goals as a group. “We kind of write for ourselves. I’ve probably listened to the EP 50 times.

“It’s like, if I can’t relate to it when I listen to it, how can I expect anyone else?”

It might seem like there’s a lot of heavy stuff going on in what Introvert are trying to say, but the sound is pretty heavy, too. There’s a lot of tasty little elements to unpack, but putting his finger on any distinct influence on Introvert’s sound is hard for Franks–there just isn’t one. “My favourite genre is country. I love it, it’s what I was brought up with.

“I like the idea with or stuff that it paints a picture–a story but not a story–that’s what I get with country-western kind of stuff, they’re always telling a story.

“Steven, our drummer, he listens to some really weird shit, actually. Real out there cartoon-y kind of music. Matt listens to a lot of Deftones and Denzel Curry. We all have a wide variety that we cross, even Gang Of Youths and 30 Seconds To Mars. That kind of helps with our anthemic kinds of tracks.”

And there’s lots of instances of that in Mending Breaking, a sense of unity seeping through a lot of the choral breakdowns. “We wanted it to capture our live essence, as well,” says Franks. “We want people to sing, to sing along.”

Much like negative thoughts and emotions, Mending Breaking is a cycle, and can be listened to as such–but where’s the mending part come into it? We don’t after all, want to get stuck in a vicious loop of perpetual misery. “No, of course not!” agrees Franks.

“It’s all about coming to the realisation that things are shit, that’s the first step to mend. Once you know, you find a way, you need to let someone in. The frustration in that is like I’m looking in the mirror and saying it to myself.

“I wanted to paint the picture; you have to do this. You have to mend.”