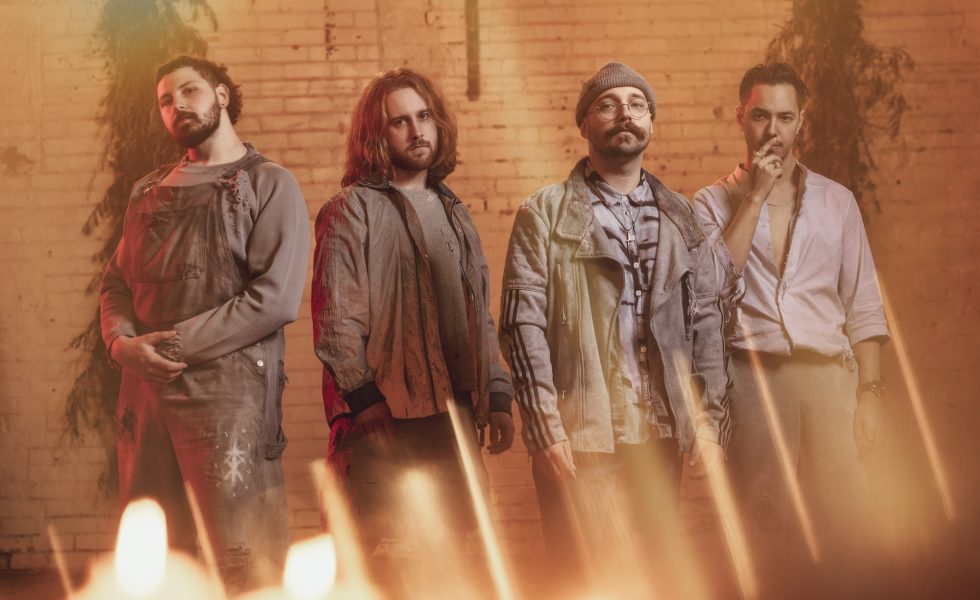 Hang on to your cowboy hats and get ready for a crossover because metalcore maestros The Gloom In The Corner are taking listeners to church, cinema-core style, with their new single and music video New Order.

Yet, as fans of the theatrical concept group are well aware, this dynamic blend not only serves an important purpose delighting the audience with its unique sonic fusion, but also provides the perfect backdrop for the next chapter in the Gloom Cinematic Universe.

The third single off their upcoming album Trinity (out Oct 28 via SharpTone Records), New Order sees vocalist Mikey Arthur, guitarist Matt Stevens, bassist Paul Musolino, and drummer Nic Haberle, make their way back to the Mortal Realm as they delve into the origin story of former adversaries Elias DeGraver and his Gloom, Atticus Encey.

Fleshing out the narrative, frontman Mikey Arthur explains: “At the end of our track Requiem on Ultima Pluvia, our last arc’s characters (Jay and Sherlock) were killed off by new antagonists Elias DeGraver and his Gloom, Atticus Encey, leaders of religious faction The Holy Order. New Order tells the tale of those two characters and how they came to be. The world has changed since the events of Ultima Pluvia with the exposure of the supernatural community to the public eye. After the disbandment of The Sect, The Holy Order have taken over as the number one world super power, as their factions usurped mortal government bodies from the inside, bringing harmony for the first time in history between the mortals and the supernatural.”

“As heads of The Holy Order, DeGraver and Encey become the new Rulers of the Mortal Realm.”

“Guest vocals by Taylor Barber (Left To Suffer) serve as the voice of DeGraver on the track. In the first verse he tells of how the church he was brought up in ostracised and attempted to crucify him after they discovered he was supernaturally different to his peers.”

Delivering an empowering underdog anthem to accompany DeGraver and Encey’s bloody accent within The Holy Order, and their eventual role as the leaders of the mortal and supernatural world, The Gloom In The Corner have paired the powerful track with an equally stunning music video, which fans can watch below or stream here: https://bfan.link/new-order.

The origin story of Elias DeGraver and Atticus Encey is a dark and gruesome tale; in his adolescence, the church DeGraver was a part of attempted to murder him when they discovered his supernatural abilities, seeing him as demonic and a false messiah. In response, Encey, an ancient Gloom that, much like Sherlock, was reincarnated in DeGraver, emerged from DeGraver, and turned on his friends and family, burning down the establishment with everyone in it; only he and Encey survived. Wandering the streets alone, DeGraver was taken in by a chapter of the Holy Order and converted to their religion, being taught that monsters and supernaturalists are better than mortals, though DeGraver still saw them as equal. Over time, DeGraver and Encey rise through the ranks of the faction, soon becoming the President of the entire global organisation in the events leading up to Jay and Sherlock’s demise.

After the Sect’s disbandonment, and the exposure of the supernaturalist community to the public, DeGraver and the Holy Order take charge as an official government agency, tasked with assisting and aiding their community on a worldwide scale. Despite all this, the Order and its community are still frowned upon by the mortals, and after some time, DeGraver and Encey stage a worldwide coup, taking over all governments and military, bringing the supernaturalists to a level higher than ever before in history.