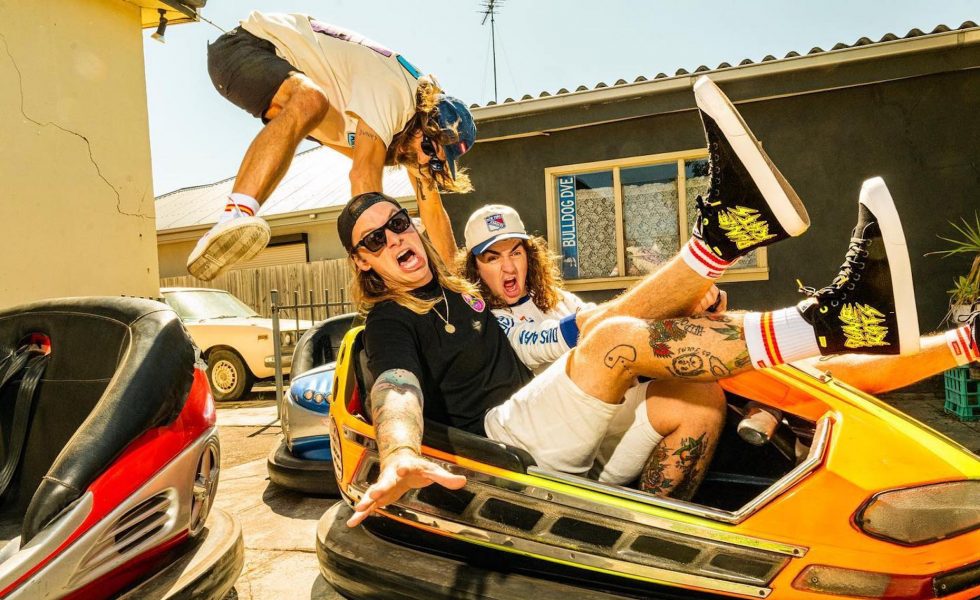 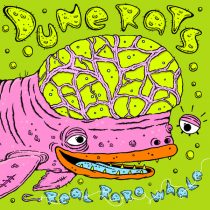 “Time for some fun” declares the opening line to the impending new album Real Rare Whale from Aussie professional party-starters Dune Rats; and the trio more than deliver with fast-paced frivolity overflowing on their fourth full-length outing.

Brandishing a fluro whale that was inspired by an infamous orca who aided whalers in the port of Eden in New South Wales in the late 19th and early 20th century on its cover, Real Rare Whale is a bustling love letter to youthful indiscretions, optimism, and tongue-in-cheek garage punk spliced with fluctuating influences across the space of ten tracks.

Following up from the Dunie’s #1 ARIA charting 2020 album Hurry Up and Wait, 2022’s Real Rare Whale takes the gloomy state of the world and turns it entirely on its head via the trio’s established knack for crafting melodics with cohesion and a cheeky aesthetic, ultimately forming what will undoubtedly go on to become one of the biggest feel-good albums of 2022. With track names like Pamela Aniston, Drink All Day and Skate Or Don’t lying in wait on Real Rare Whale, it’s clear from the outset that the trio have shaped up for yet another classic Dune Rats outing. But, as anyone who has witnessed a Dunies live show or heard beyond their unofficial Australian anthem Scott Green, it’s not just stylised gimmicks and goofs that have propelled the Dune Rats legacy; this is a group who are unquestionably connoisseurs of infectious and clever craftsmanship, seen in full glory on opening track LTD. A short but sweet anthemic singalong, LTD signposts the overarching thematics of Real Rare Whale: powerful nostalgia, optimism and unbridled fun. And if LTD is the appetiser then following tracks Dumb TV and UP cement the album’s ethos in stunning fashion with a blistering punk bop on the former, and zesty indie pop goodness on the summery UP.

Enhancing and finessing the formula that has served them so avidly to date without losing their trademark rough and ready edges, the Dune Rats in 2022 with Real Rare Whale are a perfect blend of ambition, joy, and chaotic genius.

With nostalgic odes to teenage crushes (Pamela Aniston), growing up (Space Cadet), day drinking (Drink All Day) and unconditional love (Melted Into Two) following on, Real Rare Whale isn’t just thematically nostalgic, with direct sonic nods to Pixies’ Where Is My Mind? on What A Memorable Night and dancing inspired by music videos of the late 90s/early 2000s artists like Britney Spears and Christina Aguilera. And while the gleeful chaos and punk-filled formula goes down smooth throughout Real Rare Whale, what’s most prolific throughout the album is the Dunies embracing the inevitability of growing up and maturity – but all without sacrificing their trademark energy. The tunes are tight, there’s hardly a swear word in sight, and tracks like If This Is The End and Space Cadet in particular highlight the trio’s ability to weave introspection with their trademark ratbaggery without jarring diehard fans. Relentless, riotous, and distinctly upbeat, Real Rare Whale feels like an old friend you want to keep in touch with (and potentially day drink with occasionally). Enhancing and finessing the formula that has served them so avidly to date without losing their trademark rough and ready edges, the Dune Rats in 2022 with Real Rare Whale are a perfect blend of ambition, joy, and chaotic genius. An album that genuinely slaps while also tugging at your nostalgic heartstrings? Well I guess this is growing up.