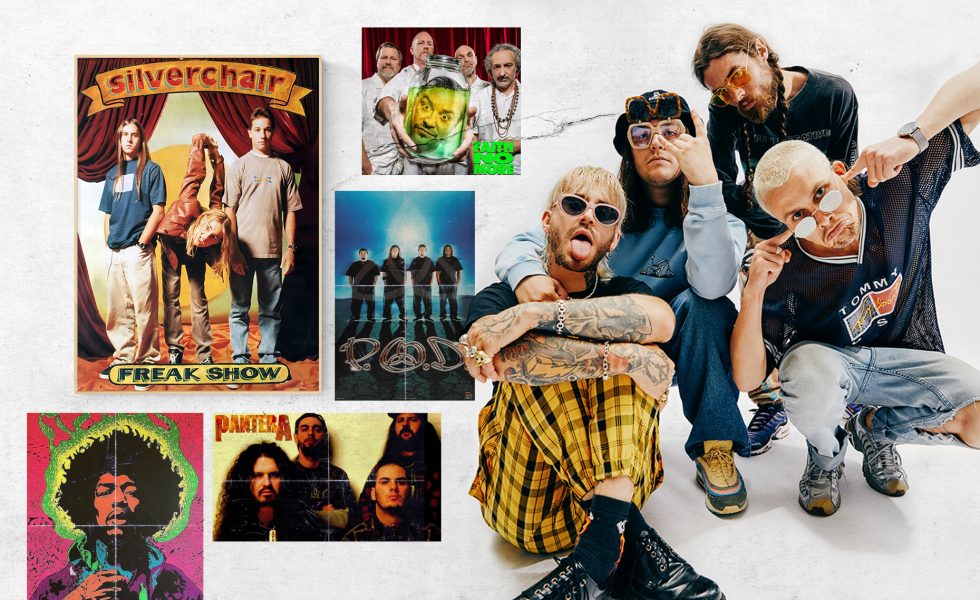 GET IN THE VAN: OCEAN GROVE // A Selection of Oddworld Favourites

Ocean Grove are a wild bunch, a loose unit, a one-of-a-kind. So we had to ask, what sounds shape their Oddworld?

You’d think it would be Japanese punk rock, Gregorian chants, or noise music recorded in underwater caverns as black clad monks gaze on from a distance. No, they’re too cool for even that. Some of their picks will astound you, perhaps make you go, “hmm.”

These nu-nu-metal wunderkinds are coming to a place near you this summer, on tour round Europe having just finished a massive national tour with ‘core household names The Amity Affliction. Drip feeding us a string of certified fresh bangers in the form of Ask for the Anthem, Sunny, JUNKIE$, and now NEO we’re itching for the Friday 13th (March) release date of Flip Phone Fantasy, the gloried follow-up to 10 outta 10 classic The Rhapsody Tapes. Effortlessly cool, these rock stars (not porn stars) take us through some of their cherished cuts, forming their musical outlook from rather tender ages. We got the lowdown from frontman Dale Tanner, bassist Twiggy Hunter, guitarist Matt Henley, and producer/drummer Sam Bassal. Execute the sounds, gentlemen:

The Drones – I See Seaweed

I became familiar with Gareth Liddiard and The Drones after a friend handed me his solo record Grand Tourist. I’d never heard anything quite like it, especially with it being just one man and his guitar by a crackling fire. When I first heard this song on the radio, albeit a radio edit, I was gob-smacked – chills all over my body. Eerily haunting verses that crash head-on into an earth shattering, apocalyptic cacophony as Gareth bellows, “Well ain’t that just the way things are?” You get the full course a whole three times before it trails out with Liddiard’s iconic screeching guitar tone. As much as a rockstar as he is a poet, Liddiard’s vocals are jarring and definitely not pretty, but that’s exactly why I love it.

I recall Crack The Skye being gifted to me for my 18th birthday by my good friend, Dan. I hopped in the car after a family dinner, chucked it straight into the CD player and this opening track blew me away – along with the rest of the album (a colossal listen from start to finish). I was so compelled by the pure mastery, almost sorcery, of it all. Great riffs, powerful and intriguing vocal styles between almost all band members and one of the best chorus melodies I’d ever heard. In my eyes this was heavy music done to a tee.

Silverchair – Anthem for the Year 2000

No more than six or seven years old, I was glued to the TV watching the music video to this song on Video Hits. It felt like one of those lightbulb moments that kick started it all for me. I was definitely picking up what Daniel Johns was putting down. The anarchic energy and ethos of the song was sickly addictive as a kid and it couldn’t have come at a better time in my life. The start of a new millennium and what felt like a time of change in my own little brain, too. I grew up in a room with my older brother Ryan, listening to all his CDs and songs, like this one, which cemented my love for heavy music at a very early age. I owe a lot of vocal inspiration to people like Daniel Johns (and Mike Patton – honourable mention).

I remember being introduced to this song as a kid by my Dad (along with the entirety of Faith No More’s back catalogue) and within days of hearing it, knew it word for word. To this day it’s one of my most played. Stripsearch is one of few tracks I can never get sick of. I never really looked deep into the meaning of the lyrics as a kid, but felt as if I understood the underlying ethos of the track nonetheless, which now, is totally in line with what I imagined it to be in the first place. Truth is my name, give yourself away. Long Live FNM.

Type O Negative – I Don’t Wanna Be Me

RIP Peter Steele. Forever in our hearts. The first time I ever heard Peter Steele’s cavernous vocal tone and Type O’s hyper-industrial and chilling guitar tones and production as a child it had me shook. I was in love. I had never head anything quite like them. I grew up listening to an array of genres and artists. From Elvis to Kate Bush, 2Pac, B52s….But Type O Negative did something for me like no other. This particular track first blessed my ears when I hit play on a compilation CD (from what I can remember) that I received with either a skateboard or hoodie I purchased. If I could include the entire discography of Type O, I would. You’ll have to take my word in saying that it’s more worthy of your time than you could possibly imagine. Go listen and be blessed by the irreplaceable Dark Prince, Peter Steele.

Pantera – Domination
I was introduced to this band around the age of 13, when a new kid moved to my school and we both got on well as we played music. He showed me the Cowboys From Hell album and the sheer aggression made my brain tick in a new way and it hasn’t stopped since. From the second the track begins it has straight up fuck you attitude that kicks you straight into gear. The speed of his soloing and the complete slow down at the end of the track is one of the heaviest things to ever be recorded. It has shaped much of the metal music style since!
The Jimi Hendrix Experience – Little Wing
This is a track that has stuck with me since I heard the first bell hit of the song. A true masterpiece of R’n’B showcasing how extended and jazz shaped chords can be voiced in a very blues way. The groove of the song really puts you in a peaceful place whilst hearing some of the most brilliant choral voices guide the song. And in true Jimi style he really opens up with his solo throwing some huge vibrato bends! This is one song that has really shaped the way I play through chords and move my hand up the fretboard.

P.O.D – Execute The Sounds
I remember being about eight or nine years old and my mother coming home from a Christian bookshop with a CD for me to listen to. Up until this point the only music I had listened to was worship music or 50 Cent’s greatest hits. I put this CD into my big stereo system and this started my love for rock music. To this day, P.O.D’s melodic and bouncy style of “nu-metal” has been the biggest influence on Ocean Grove’s heavier material.
Gorillaz – Feel Good Inc.
I’ll never forget the feeling of turning on my TV to watch some Video Hits on a Saturday morning and being instantly glued to this cartoon band’s music video. The song was so catchy, but he music video was the one thing that remained in my head forever. As I got older, I realised just how big of a vibe this timeless classic was. One of the best bass lines I’ve ever heard—an all time favourite.