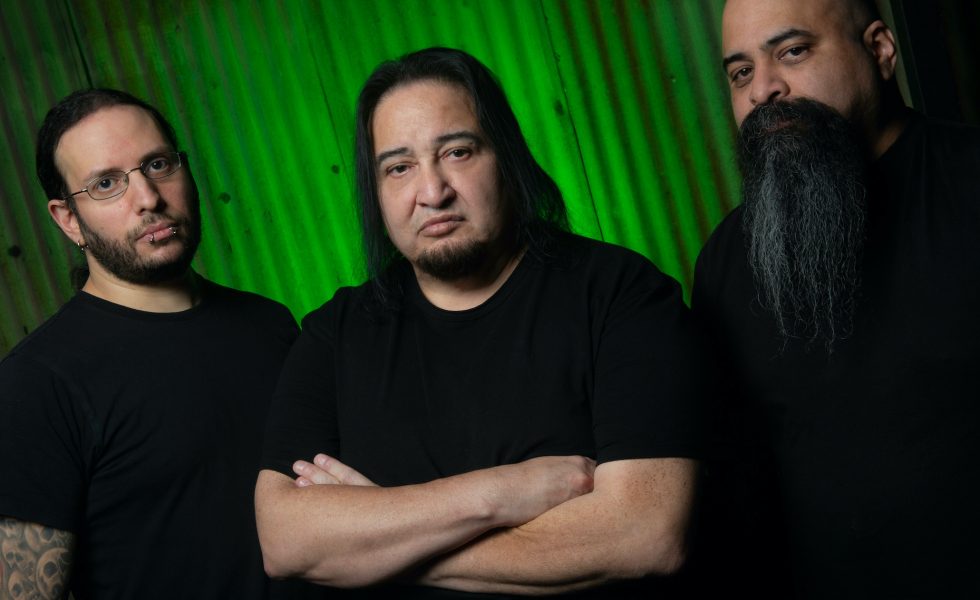 Many artists at least feign a level of humility when asked what they think of their latest work. Dino Cazares of Fear Factory is not one of those people.

“I think it’s amazing!” he says with a loud chuckle, as if being asked such a thing was a silly question. “What do you think I’m going to say? That I hate it? It’s amazing, man!”

He laughs heartily, like a man who has succeeded against strong opposition has every right to do. Aggression Continuum, Fear Factory’s tenth album, very nearly didn’t come out at all. Recorded back in 2017, before it could be released Cazares had to contend with a near-decade long legal battle against former members Raymond Herrera and Christian Olde Wolbers over the rights to the use of the band’s name. He finally won the fight in mid-2020, but in the aftermath vocalist and co-founding member Burton C. Bell left Fear Factory, citing issues with all his previous bandmates and a desire to concentrate on his Goth band, Ascension of the Watchers.

“Bell decided he didn’t want to be a part of it,” Cazares says, dismissively. “He’s said he had problems with the whole process and he’s over it… it’s his loss.”

Fear Factory’s guitarist and primary composer is as unapologetic as ever in his dealings with former members of the band, who ousted him completely from the line-up in the mid-00s before he and Bell reunited for 2010’s Mechanize. But it’s not just those opinions to have landed him in hot water for his outspokenness.

On the hustings for Genexus in 2015, he dared to call Donald Trump an idiot, and worse, constantly.

“Yeah, and I copped a lot of shit for that,” he says, with uncharacteristic reserve. “I got a lot of hate. I got death threats! Because I’m Mexican, and Trump was saying that all Mexicans are criminals and drug dealers and we all should be deported, and I called him out on that. But, yeah… I got death threats because of that from all these Trump supporters.”

Trump continued his anti-Mexican rhetoric throughout his term, so Cazares was probably justified in his opposition to the man. Now he’s gone, what does he think of the political situation in the US now?

“I think I’ll just keep quiet about politics from now on.”

There’s a lot that’s good about technology, but it can go too far.
[Dino Cazares]

Fear Factory’s music has always had a political bent, however.

There is a stark irony in Fear Factory’s extensive use of technology in their music to decry it in their lyrics, and the backlash they suffered over the use of computerised drums on 2012’s The Industrialist is the proof behind Cazares’ words about overdoing it. It was one of the things he set out to avoid again with this release, and the long gestation period the album was forced to undergo meant he had plenty of time to get it right.

“It was important to me that we had real drums on the album,” Cazares says. “And with the lockdowns and everything we had last year, it just gave me the opportunity to go back into the studio and rework a lot of the parts. I went back and did some work with the guitars and had all the drums recorded and spent a lot of time with the mixing.”

The result is Aggression Continuum, an album that very much lives up to its name as it continues the band’s legacy of staccato riffing, mechanically precise drumming and hate-machine vocals that continues their man vs. technology saga. It’s a record that could come from no other band. Despite their multitude of imitators, Fear Factory has a sound like no other, an instantly recognisable mix of melody, crushing groove metal and industrial elements that the band established with the groundbreaking Demanufacture. Released 25 years ago this June, it remains one of the most influential metal albums ever, and Dino worked with his former label on the anniversary three-disc set, pressed on vinyl for the first time.

“It was important for me to be involved,” he says. “A lot of people don’t realise that most bands don’t own their recordings – they’re owned by the record label, whichever label they were signed to when it was released. So they could have just done it without any input from me. Working with them let me have a bit of control over what they did with it, and I have to say that it came out looking great, sounding great. The live tracks sound amazing!”

Amazing is a word that Dino Cazares uses a lot as he talks about both Aggression Continuum and its archetype, and even as he talks about the next step for the band and the obvious elephant in the room. Burton C. Bell may no longer be part of the Fear Factory story, but Cazares is determined that the band is a long way from over.

“It may not be as hard as you think,” he says, when asked about replacing Bell, one of the metal world’s most distinct and influential voices. “There’s been a lot of amazing talent who have showed an interest, a lot of really good vocalists who have already auditioned and I’ve already started to work through some of the possibilities. I’m not going to say when, but there could be a decision soon.”