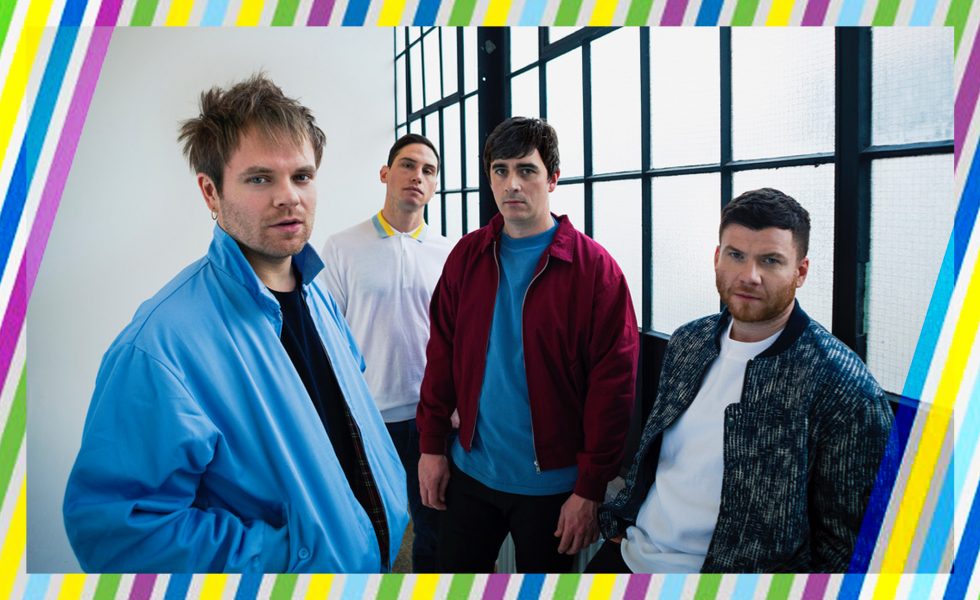 It won’t be everybody’s cup of tea, but Enter Shikari’s sixth studio album, Nothing Is True & Everything Is Possible, is brilliant.

As you listen, you find it hard to make sense of how it makes you feel, and yet you’ll find yourself really thinking hard about what’s going on, sonically and socio-politically. For Enter Shikari frontman, album mastermind, and all-round great guy, Rou Reynolds, those are just two small cogs at work in a great machine of intent. “Music for me is not just background noise, I’m not the person who sticks on the radio–it’s the same for any music lover; it really is a journey to listen to music, it’s something to get completely absorbed in.

“The process of making this album, it ate me up. Everything else in my life got neglected. There’s such a level of detail that, yeah, if people truly get lost in it, that’s when we can breathe a sigh of accomplishment.”

With its colourful array of rock, classical, dubstep, metalcore, Brit pop and much, much more, you have to wonder what kind of headspace Reynolds had to be in to be able to create such an intrinsic tapestry of sound. Reynolds ponders his response carefully. “I’m quite lucky, I think, in that I grew up around so many different styles of music and music lovers and therefore, I have such a variety of sounds in my bones, d’you know what I mean?

“It’s like, that’s the natural progression of our band, we’re quite fidgety as a group of musicians, we like to push ourselves and keep progressive and trying to absorb new influences and broaden our sound.

It was a massively emotional rollercoaster. There was no one to pass the buck onto, it was up to me to meet this deadline–it was pretty intense, but it was an amazing experience.
[ Rou Reynolds ]

“At the end of the day, we’re trying to replicate life in all its broad, emotional experiences. We want as broad a palette as possible in order to actually be able to convey all the different emotions.”

It’s hard not to ignore the variety of influences and styles Enter Shikari have dabbled with in Nothing Is True & Everything Is Possible–even harder to get past the cohesive clarity with which they manage to present such an eclectic blend. Giggling, Reynolds says, “That’s something you have to keep an eye on. I absorbed so much music so young, I don’t even see the segregation.

“For me, I have an emotion, and I’m trying to convey that emotion with pitch, with rhythm. It really is as simple as that. It’s not that considered, I’m quite lucky it sort of just happens.”

There’s that word again–‘emotion’. When Reynolds said he neglected many areas of his life, that wasn’t an understatement. Producing, composing, and performing on this release, demanded every part of Reynolds’ being. “There’s more time and effort that’s gone into this album than any other purely for the amount of work, and, as I say, the detail on the album–the fine-tooth comb was for the whole process.”

“It was a massively emotional rollercoaster. There was no one to pass the buck onto, it was up to me to meet this deadline–it was pretty intense, but it was an amazing experience.”

“We got to do things we’d never done before, like recording with a full orchestra. That was me very much outside of my comfort zone but it was incredible!”

Surprisingly, Reynolds attests he didn’t find he needed to cope with such a tumultuous level of pressure, throwing himself into the foray of creative duties without hesitation. “I didn’t see it as something I had to cope with,” Reynolds reasons. “I had to produce this.”

Normality has been destroyed by the last five years of shocks, everything from President Trump to Brexit, to the rise of nationalism throughout the world.
[ Rou Reynolds ]

“The best metaphorical thing I can think of is, we wouldn’t ask why a mother brings up her kid. If the song writing stage is giving birth to the kid and the production stage is bringing up the kid, then it was like, of course, I had to!

“Even if it was stressful, I didn’t even acknowledge it. Obviously, I was losing a lot of sleep, especially toward the end of it, but because it’s the thing I enjoy doing more than anything else in the world. It’s not like I was doing some job that was destroying me, I felt totally capable at all points.”

Historically, Enter Shikari have never been ones to shy away from expressing their opinion and sharing their values through the music. The jab this time around sees Nothing Is True & Everything Is Possible take note of global events of the last five years. “Normality has been destroyed by the last five years of shocks,” Reynolds considers. “Everything from President Trump to Brexit, to the rise of nationalism throughout the world.”

“Even now with the pandemic, there are things happening that we didn’t think were possible five years ago, ten years ago. Possibility became the main theme of the album. Possibility isn’t something that’s just positive or motivating anymore.

“Normally when people hear the word ‘possibility’ they think of the future. ‘What can we design? What are we capable of? Whereas now I think we’re almost like, ‘Oh Christ, what’s next?’ There’s so many disconcerting things happening in the world.”

Reynolds bursts with enthusiasm at the suggestion that we find ourselves in a defeatist state of being these days. “And you have to watch it because it’s very easy to get into a nihilist way of thinking–‘Everything’s fucked, fuck it,’ which is obviously never going to help anyone, then it becomes self-defeating.”

“There’s a lot I’m excited about, I’m always going to have some sort of optimism about our species, because human ingenuity is always something that seems to be called on at times of necessity.

“It [the album] covers so many basses, but it all comes back to that central theme—the dichotomy within possibility.”

So, what of the dichotomy of actualities?  The album has been described as discussing a dystopian future, but what’s to say this album isn’t in fact a narrative for a dystopian present? “When I wrote the very first line of the album, Is this a new beginning? Or are we close to the end?, it felt like I was dramatising a situation,” says Reynolds. “Now, that seems like a relevant question–like, is this pandemic going to do what it’s doing in Hungary, where the country is now effectively an autocratic state, bringing in laws that are simply crazy in a European democracy. Or is the pandemic going to be something we learn from, to be prepared and see the benefits of global unity?”

Purchase & Stream Enter Shikari’s Nothing Is True & Everything Is Possible Here.