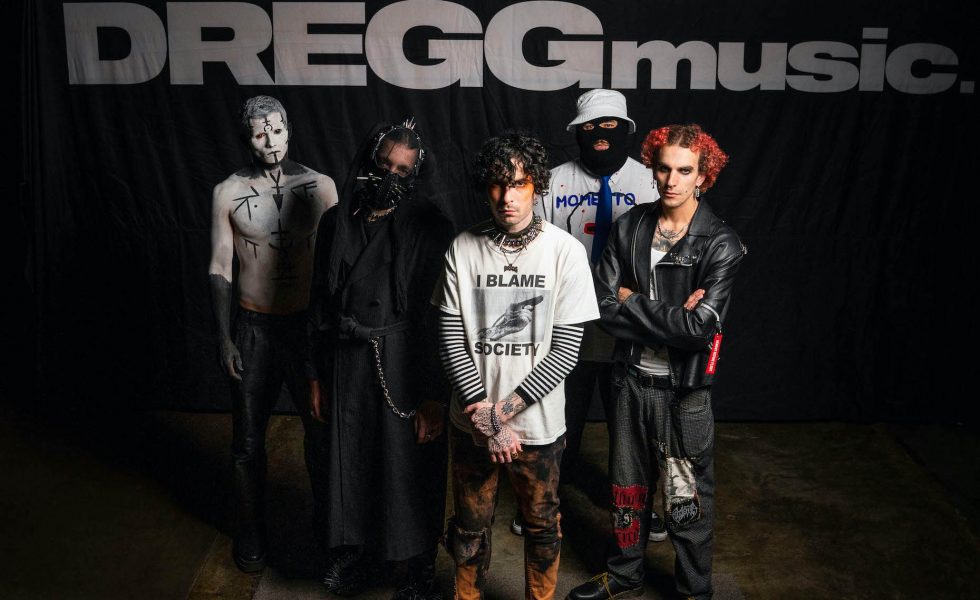 “We know what we are; we are a bunch of metal dudes that grew up on nü metal that like to dress up … We were all goths and emos growing up so we aren’t going to get on stage and pretend that we are Louis Vuitton.”

“We know our lane and we seem to be good at flourishing within that lane” says Chris Mackertich, the eccentric frontman of Melbourne based outfit Dregg.

After making history as the first nü metal act and only third Australian act to be signed to the esteemed Epitaph Records; it seems not a truer word could be spoken; the band is flourishing and if their most recent string of singles are any indication, Dregg is steadily on the rise in terms of their prominence.

Delivering an eclectic dose of genres and soundscapes, the group’s newest singles highlight not only some of the groups heaviest and most unique works to date but also an expansion of what fans have come to expect from Dregg.

“To be honest we have always wanted to cover a lot of different genres.” states Mackertich.

“If you go back to Hyperbole, it’s got elements similar to The Prodigy while Return Of The Dregg was slightly Madball sounding.”

“I guess, what we are trying to do with Dregg is to have a band where we have the freedom to make whatever kind of heavy music we want. We are all hardcore kids at heart, it’s what we grew up on so it will always be a basis of what our sound comes back to. But by tying in rap and metal and industrial elements we can kind of bounce all over the shop because there aren’t any limitations on what we are meant to sound like. We just do whatever we want to do at the time.”

A concept that Mackertich also says is the reasoning for the group’s decision to release a string of singles instead of compiling it into an EP format.

“Because we are constantly evolving, having new ideas and trying new sounds; singles work best for us.”

I guess, what we are trying to do with Dregg is to have a band where we have the freedom to make whatever kind of heavy music we want. We are all hardcore kids at heart …
[ Chris Mackertich ]

“We will release an album at some point but trying to put something together as a full length would almost guarantee some of the songs would sound outdated by the time it’s released. If we do an album we want it to be something that stands through time and isn’t just what we are doing at that moment.”

“It’s also because we are so influenced by the rap and hip-hop scene.”

“We have noticed that multiple single releases is the way a lot of those style artists are going, which just makes sense with music streaming now.”

“You only have people’s attention for a short amount of time and we know that we aren’t the biggest band in the world. We’re not Parkway Drive. So we feel we get a better response by releasing short and sharp singles that might make someone’s week and make them tune back in and then hopefully move onto the next song.”

“I feel it’s a better way to regularly connect with fans instead of just going, ‘yeah here’s an album, now you may not hear from us for 4 years.”

It’s also working out a lot better for the groups Australian fans seeing as most of the single releases have also doubled as a reason for a bunch of shows and tours; most recently the group has embarked on the Internet tour which has already seen Dregg amaze crowds in Sydney before they round out the tour with shows in Adelaide and Melbourne over the next two weeks. Hitting the road with them will be JJ Peters, the iconic drummer for I Killed The Prom Queen who later fronted Deez Nuts.

“Deez Nuts and Hellions both played a very big role in helping Dregg get out there to Australian crowds.”

“Deez Nuts took us on two Australian tours and we absolutely love them all as people. They are all just really good dudes so when JJ told me that he was going to start playing shows again, the tour just worked out well for us to have an excuse to hit the road together again. We are super stoked to have him on board. I grew up listening to Deez Nuts so it feels cool to be a part of that story to a small extent.”