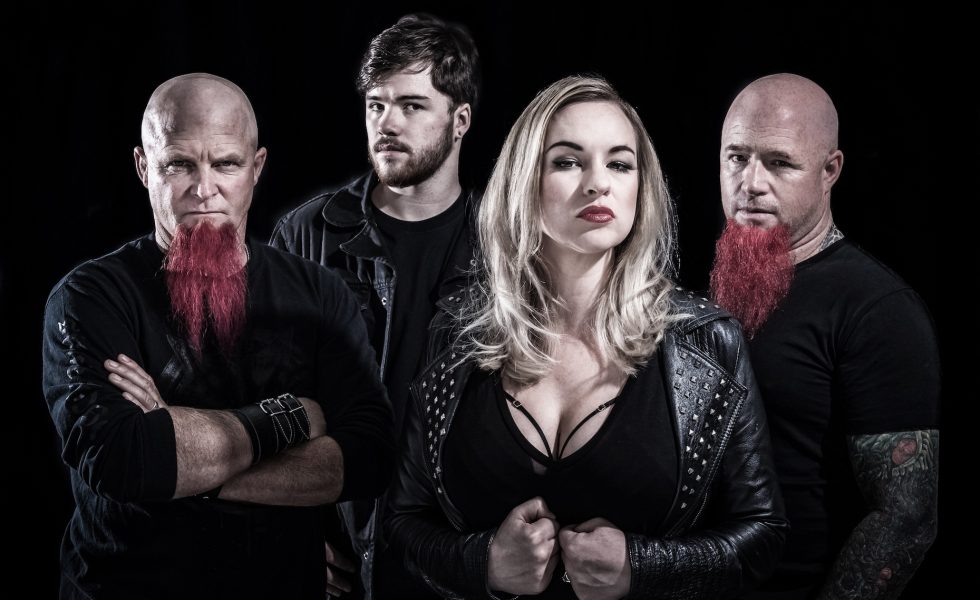 DEVILSKIN // Touring, Touring, And Then Some

To see two of the finest voices in rock ‘n’ roll, indeed, two of the finest frontwomen, on the same bill together again for this week’s Download Festival seems to have become something of a staple as much as it is a treat.

MORE: The Amity Affliction: Bringing Misery Home // METALLICA: Return To Oz For Massive October Tour // SLAYER: Total Destruction Down Under One Last Time // BEHEMOTH: This Stage Is My Domain REVIEWS: CHILDREN OF BODOM: Hexed // IN FLAMES: I, The Mask

New Zealand’s best kept metal secret, Devilskin, have toured with their American hard rock counterparts, Halestorm, so many times now it’s no wonder that the Devilskin name is fast becoming the hottest word on anyone’s lips. Jennie Skulander, the voluptuous siren at the helm of Devilskin, takes a moment to reflect on the band’s rapid success. “We’ve played with some awesome bands over the last few years,” she says. “Now we’re just waiting to get back into the studio, [to] get out there and play some more shows.”

Energetic and with an excellent sound, to see Devilskin on stage is to be witness to something electric and truly special. Devilskin’s presence alone is enough to win over a crowd and the level of commitment to their craft is unmatched. Indeed, touring Australia with Halestorm in January 2017, Skulander had had her first child only four months prior. Family on the road, and being on the road without family, can be hard. “When we did that first tour with Halestorm, Georgia [Skulander’s daughter] came along to Aussie with me,” Skulander says. “When we went out to Europe shortly after in 2017, she came with my husband. They followed me around with the band, 16 shows on in Europe that she was there for.

“These days it’s too hard to take her on tour–she’s two and a half now–we were in the UK for seven weeks last year and that was the hardest thing so far because she was back in New Zealand.

“It does get hard–you just miss them so much, when you come home all you want to do is be with them and not want to have to leave again … but that’s the career I’ve chosen.”

Still, a little rocker-in-training in the family is pretty cool, and indeed, Devilskin is nothing if not all in the family. Comprised of guitarist Tony ‘Nail’ Vincent and bassist Paul Martin (the latter being Skulander’s brother-in-law) and drummer Nic Martin, son and nephew to Martin and Skulander respectively, Devilskin could be what would have happened if The Jackson 5 had been metalheads. No friction here though, Devilskin have an advantage on other bands, Skulander says. “I don’t think we’ve had any fallings out over the past years. If someone’s not happy, they speak up.

“When you’re touring constantly with a bunch of people, when someone’s in a bad mood it’s gonna reflect on others so you try and remain positive, especially when you’re travelling together in a tiny bus!”

The creative process isn’t hindered either. Working on pre-production now, Devilskin hit up the studio on April 1 to record the follow up to 2016’s Be Like The River. “We’ve been writing for the album since the start of last year,” explains Skulander. “We had planned to start recording at the end of last year but a tour came up.”

It might seem premature to hope for Devilskin to perform any new songs at Download this weekend, but Skulander says that’s not the case, the band planning on performing two new songs, including last year’s single, Endo. “The other one’s called All Fall Down,” says Skulander, “it’s going to be released any day now!”

Skulander says doing the tours with Halestorm and Slash have opened wider doors and helped Devilskin break into Australia, something they were finding harder to do than in Europe. “Those shows with Slash definitely brought us a new fanbase,” she says.

“These shows at Download we’re hoping will bring us some more fans, and we’d love to come over and do a headline tour in Australia, definitely!”