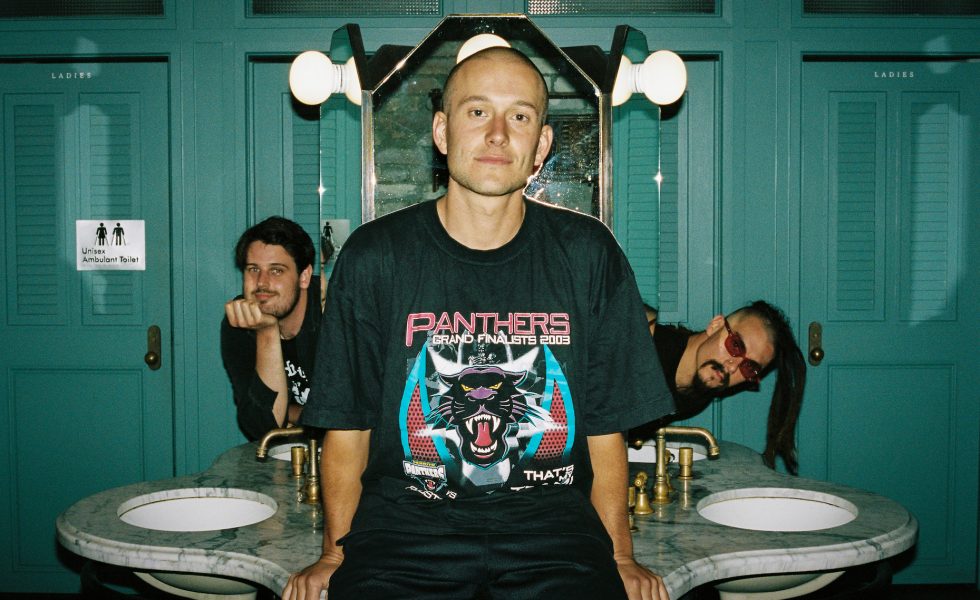 DAVE THE BAND // Self Confessed Slob

From covering Nirvana in a battle of the bands contest to recording with the legendary Steve Albini;  it’s been a wild ride for Newcastle’s dave the band.

Forming in high school, under the name The Dynamics, the trio has steadily become one of Australia’s most exciting punk acts, turning heads with a string of killer EPs. Ahead of the release of their debut full-length, Slob Stories, we caught up with frontman Noah Church. Read on.

Hysteria: Tell us about your new album Slob Stories.

Noah: We recorded it at least 18 months ago, I think it was back in November 2018. We were in Chicago with Steve Albini and now we’re finally getting to release it.

How did that partnership with Steve Albini come about?

We just emailed the studio, that’s all there was to it. It’s something our drummer Gabe (Argiris) has wanted to do since high-school, he’s always fantasised about it. One day we were just talking and decided to send the email, they replied and we made it happen. It was pretty easy [laughs].

How did working with him compare to what you’ve done on previous EPs?

We loved it! It worked really well because he’s more interested in capturing what’s already there and the dynamic of the band- that’s exactly what we were looking for. In the past we’ve had people who didn’t focus on our natural sound, they wanted to push us in different directions. We’re pretty stubborn and we’re not interested in doing that [laughs].

For us, working with Steve felt natural. It’s how we’ve always wanted to do things. We wanted a place we could go and set up, and play the songs in the way we’d do it live. We’d then go back and listen to it and if we liked the take we’d keep it. On the other side, if we didn’t like it we’d go back and try to do it again. It felt pretty easy.

You’ve mentioned growing up with music-loving parents. Did you grow up listening to any of his records?

I don’t think my parents listened to many Steve Albini albums, but I got into Nirvana’s In Utero when I was in year seven or eight. I got into Pixies at the same time, that would’ve been my first experience with the music he’s recorded. It’s been a long time coming.

For us, working with Steve felt natural. It’s how we’ve always wanted to do things.
[ Noah Church ]

Are they some of your earliest music memories?

I’ve got plenty that pre-date that. Mum and I would listen to Foo Fighters, The Lemonheads and Custard, they were the main bands she had on cassette and CD and the first bands I remember listening to. I still love listening to those bands and do take influence from them. There are elements of all of them in my songwriting and I hope it comes through when you listen to it.

What inspires you lyrically?

I try to write as honestly as I can, a lot of the time I write quite literally. It’s just thoughts that run through my head and if like something, I’ll jot it down or put it in my notes.  I save those for when I have my guitar and come up with riffs, then I’ll stick the two together and see what happens. It just feels so natural. With dave, we’re not trying to put up a front. We’re just trying to show who we are and that’s how I write my songs.

Did you have any plans for the year that were impacted by the pandemic?

Just the album release in general. We’re so proud of our live show, that’s what we love doing and not being able to go out and play gigs to support it all has been rough. That’s a bit of a first-world issue though, we’re just looking forward to gigging again whenever we can.

What can fans expect to see the band do next?

We’re playing some limited capacity, seated shows in Newcastle for the album launch. We’re looking to book a couple more like that in Sydney and Wollongong depending on the situation. Outside of that, we’re looking to get back in the studio, somewhere in Australia, by the end of the year and have another album ready to go for early 2021.

Wow, you guys are moving fast with that!

Yeah [laughs]. It doesn’t feel like it though because the songs from Slob Stories are pretty old now. We recorded them back in 2018 and I write pretty much everyday. We’ve got plenty of songs, we’re itching to get back to the studio.