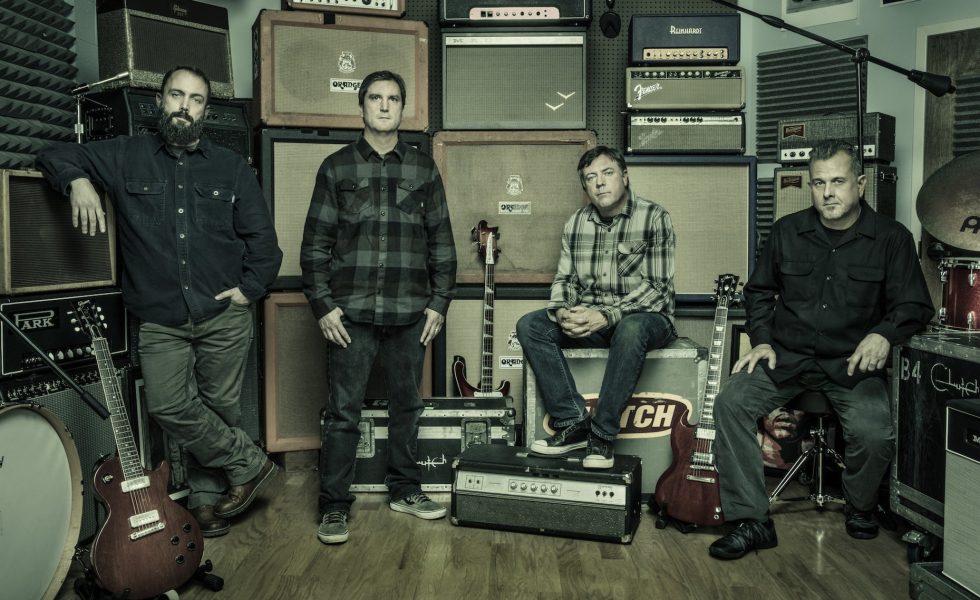 Benji Webbe, irrepressible frontman for ragga-metallers Skindred, once told Hysteria that Clutch look like a bunch of guys who play gigs “just after knocking off an eight-hour shift.” Unpretentious, laid-back, and in love with riffs. He’s pretty much right.

Maryland’s own hard rockers have run the gamut from blues rock, funk metal, Americana, and everything in between in their near three decade career. John-Paul Gaster has been keeping time with tasty fills and limb-flailing beats through it all. Clutch have influenced countless bands further afield than you’d think: Gaster collaborating with Opeth’s keyboardist Per Wiberg on the King Hobo project. Members have popped up in guest spots for Soulfly, Mastodon, and Volbeat. Last here five years ago playing tunes for Soundwave’s swansong, these workingman rockers are back to give Download a whuppin’ the only way Clutch know how.

You guys were last here half a decade ago for Soundwave. What’s the feeling in the camp for Download 2020?

Jean-Paul: Yeah, we’re very much looking forward to it. We enjoy coming down there and playing for you guys, Australia has always been very embracing of our music. It’s something that we’re not used to, because I remember the very first time we went down there, right away we had great shows and great crowds. We’re much more accustomed to having a very slow build, and having to play some place 25 times before we can get a hundred people in the room. It was really great, the reception there was beautiful, and we’re just looking forward to going back.

Australia is a rock n’ roll kinda place because if we don’t see you guys the first time, we may not get a next time.

Yeah, I could see that. It seems the fans are very, very passionate down there. I would imagine that when a show comes to town, everybody wants to go check it out. Because you’re right, you don’t know when that band might be coming back.

Book of Bad Decisions has been out for a year or so now, how are people responding to the shift in sound?

Sure. Well, it’s been interesting because, previous to Book of Bad Decisions, we did two records with Machine. He’s a producer that we had used on Blast Tyrant. On this time around for Book of Bad Decisions, we went with a different producer. We went with Vance Powell (The Dead Weather, Buddy Guy, JEFF The Brotherhood). The result was a very different sounding record. Right away, I think the reception was very good. However, I think people were surprised as to how different the production was.

I think that’s something we didn’t really fully appreciate until just recently really. Now that Book of Bad Decisions has been out for a little bit, almost a year and a half now. It’s interesting to listen back, and play some of those songs now. As compared to other songs in the catalogue. I do think it was a bit of a departure in some ways. More than anything in the approach to production. It’s got a very much more live sound. Vance Powell was really good at capturing the live energy of the band. Which is something that’s a little different than we did on Psychic Warfare, or Earth Rocker, that preceded it.

Those records were very clean, they were very much studio productions. I think Book of Bad Decisions tends to have a bit more live quality to it. The sounds are definitely more raw. I think there’s just a little bit more grit and bite in the drum sound.

I had a drum teacher who once told me, “The first 10 years of playing drums, it’s pretty difficult. It takes 10 years to get your body to be able to speak in the way that you want it to speak. After the first 10 years, it’s fucking impossible.”
[JP]

Does it feel strange when playing “live” sounding songs live, they sound more like the studio than your other material does? I know that’s a bit of an odd question…

I think maybe it has a lot to do with how we play the songs. When we worked with Machine on Psychic Warfare for example, I know that my drum parts were very, very thought out. I was thinking about a lot of two-bar drum phrases. Things that were very specific to a particular verse, or maybe a passage in the song. I think Book of Bad Decisions was looser in the way that we recorded it. And that was just because Vance really just, he impressed on us just to get in there and just play the song, don’t think about what you’re playing so much. It was much more about, “Let’s get a full take of the song.” And, “Let’s get a take that really feels good and build on that.”

As a professional drummer, you must have mourned the recent passing of Rush’s Neil Peart. What was the reaction to that in the drummer community?

Well, we can compare the passing of Ginger Baker (Cream), which was just a few months prior to that. I think that both those drummers were equally as influential amongst drummers. And by that I mean, the way that Ginger Baker played, very much changed all the drummers that came after him. And that goes for Rock and Jazz and Fusion. And all those genres that happened after that date. I guess we’re talking about 1967 to 1969.

By that I mean, there are average folks out there who are average music fans, or even maybe not even average music fans. Just people who really don’t pay that much attention to music. But if you say the name Buddy Rich, people know who that is. And the same thing went for Neil Peart, he was bigger than the instrument.

He was also the lyricist, also a massive part of their appeal. He was such a private person; it was a shock when it broke.

No doubt about it. As a young drummer, he was super important to all of my peers at the time. I can remember being 15 and 16 and 17 years old, and just starting to figure out the drums. Just starting to learn this instrument, and talking with other drummers. It was amazing the amount of inspiration that he provided for all of us young drummers. It was pretty incredible.

Looking back on his career, his contributions to that band are beautiful. As you said, not just his playing but his lyrical contribution, and the arrangements. And just his person. I’ve read a couple of his books… I’m a fan of his, and I think even even more fan now than I was when I was a young man.

I would agree. I would agree, it’s a very physical instrument. And it requires you to not only think about what you’re playing, but also feel what you’re playing. In a lot of ways, you’re almost dancing. I had a drum teacher who once told me, “The first 10 years of playing drums, it’s pretty difficult. It takes 10 years to get your body to be able to speak in the way that you want it to speak. After the first 10 years, it’s fucking impossible.”

We’ll have a record out first quarter of next year at some point. We’re looking forward to that. I’m not sure what we’re going to do as far as producers go at this point. We’re going to start putting material together, we’ll see how the material grows, and we’ll start making some decisions as to how we’re going to make that record, but for us that is the goal.