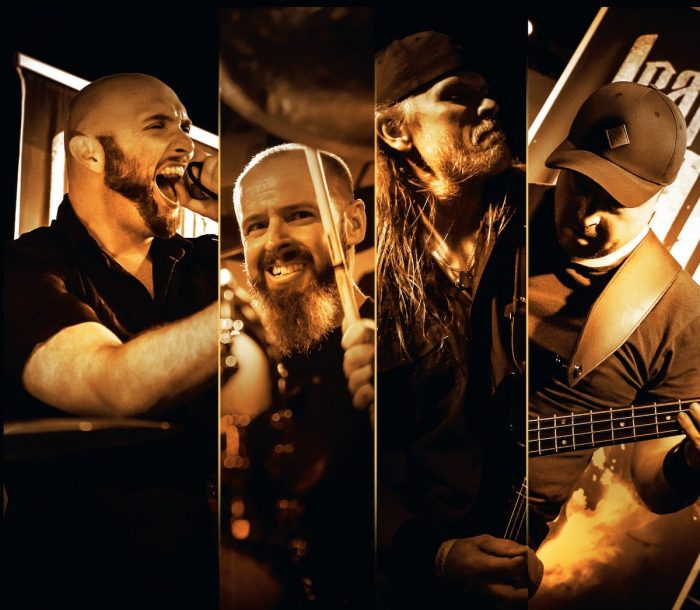 Carbon Black were hardly alone when it came to forging ahead with new material during the dark days of pandemic and lockdown.

Like many others, the Wollongong-based four piece used the time as best as they could and completed their second album, We Remain, which was released earlier this month.

Founding member and bassist Rob Giles is quick to point out, however, that the band’s recording process was quite different this time.

“It was a different process to what we’ve done before,” he explains, “because in the past we had a bunch of songs, record everything as quick as we can and get the hell out. This time it was much slower. It was a bit here and a bit there, logistically. Getting to Sydney when lockdowns would allow, and if [engineer and producer Lachlan Mitchell] was available, too.”

Sydney’s notorious COVID restrictions meant there were times when Carbon Black “couldn’t even get more than two people in the control room of the studio,” Giles continues. “It definitely made things harder, but it’s one of those things that was everywhere, and you’ve just got to work around it to get the job done.”

We Remain brings together a bunch of hard-hitting and paced amalgams of thrash metal and groove that highlight the lockstep rhythm section of Rob and brother Steve on drums against the sparkling guitar work of Damon Bishop and Jon Hurley’s wildly diverse vocals. Ten songs were recorded for the album, but in the end the list was pared down to an economical seven.

“In the sessions we recorded ten songs, and it was one of those things where, over time, a project evolves and becomes something a little bit different from what you originally intended, and that’s what happened here.”

We enjoyed getting out to the capital cities on our last album and travelling a little bit, so we’re really focusing on that. We’ve got a visit to Queensland happening, hopefully, in November
[ Rob Giles ]

Of the album’s seven tracks, the key so far has been Under Order, which features Hurley duetting with former Judas Priest and Iced Earth singer, Tim “Ripper” Owens, whom they had gotten to know during one of his Australian tours.

“Knowing he’s an approachable guy gave us a bit more confidence, and approaching him with it and talking through the project, he’s just a true professional. He was up for it, he loved the demo of the song we had at the time—well, it was more of a rough mix—and he was happy to be involved.”

Originally planned to have just a small cameo, Owens instead became heavily invested in the tune and took full advantage of the invitation to work some of his magic for the band.

“His involvement was planned to be just a verse and chorus,” Giles says, “but time went by and he sent us back these files, and it was just the way he went above and beyond … we were blown away. He had recorded pretty much his own version of the whole song! We’d recorded it as Jon singing on his own, but there was a couple of segments we intentionally left empty. We had two segments of the song that we had an idea about where we could give Ripper some instructions and say, ‘In bars 18 to 20, go wild here. Some screams. Knock yourself out.’ He had some areas where he could really go nuts on, and it worked out really well.”

Under Order is accompanied by a clip by local director Adam Jordan, and features stunt performer and martial artist Shakira Pacana. It was made as a direct contrast to the previous clip, for stand alone track Mourn.

“The previous video we made was an isolation video, and it was just all about us,” Giles explains. “So we really wanted to make something that was the opposite of that. This one’s a short story that captures the spirit of the lyrics. We employed a local horror film director, Adam Jordan, and being in horror film production he’s really good at the gory stuff but he also does action. We got Shakira Pacana, who’s really good at selling the action side of things, and it follows her through her day where she’s not trusting anyone or anything around her until there’s a face off at the end with a faceless attacker.”

Watch the clip to learn how that pans out. As for watching the band in action, there are plans afoot.

“We enjoyed getting out to the capital cities on our last album and travelling a little bit, so we’re really focusing on that. We’ve got a visit to Queensland happening, hopefully, in November,” Giles says. Before that, there’ll be a show or two to launch We Remain. Stay tuned.

“There’s an album launch coming up in Sydney that we haven’t announced the date for yet.”