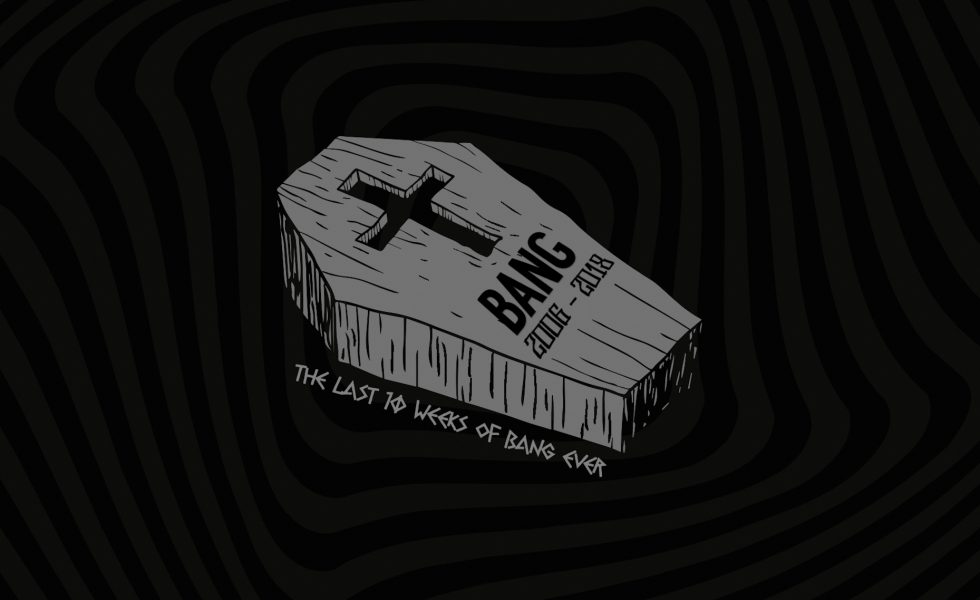 BANG! // So Long, And Goodnight … But There’s A New Dawn Rising

It’s 8.02pm on Saturday, August 18th and we’re stepping out of our Uber into the freezing Melbourne cold. After a typo – oops – leads our driver to Royal Melbourne Hospital by accident, we’ve reached somewhere a lot more appealing—the Royal Melbourne Hotel, home to Destroy All Lines’ Bang! club night for the last 12 years.

In theory, the club opened just two minutes ago, but already, it looks like we’re in for the second coming of My Chemical Romance, thanks to the sheer number of people already congregating outside. If you think about it, we kind of are—tonight’s lineup features a MCR cover band among many other treats. Dedication here is nothing new—people have, for years, come from all over Melbourne and beyond to be here, often waiting for the last train home before transportation was 24/7. The draw of such a central club meant that even kids on the outskirts and from rural areas further afield could justifiably make the trek. But still, this crowd is more than impressive so early on this cold, Saturday night.

As the line snakes around the block—and then some—outside, the rooms are filling within. If you’ve never been to Bang! before (and now you never willv…), it is, essentially, an emo club night at its finest. Imagine stepping back in time over a decade to an era where bands like the aforementioned My Chemical Romance, along with the likes of Paramore, Taking Back Sunday and All Time Low reigned supreme. But that’s the whole point, isn’t it? At Bang!, the scene never died, and nostalgia’s the name of the game. Here in this room at least, that comparison is no criticism—among the explosion of eyeliner and glitter, are kids now well into their twenties (and beyond) who never want to grow up.

According to the folks behind Bang! themselves, the night “fostered the alternative scene throughout a decade. It gave a space for those that didn’t want to head to a regular club to see bands, DJs and performances all in one space. It’s been the home of alternative partying for so many years”. Bang! gave people a sense of community, when they had nowhere else to go, which is a sentiment echoed by the masses who go here. Stace Kirkwood of Melbourne told us; “I started going to Bang! at 18, and now I’m 28. The last ten years of my life have been the craziest and best of my life, because of that place”.

Who The Fuck Is Stay Gold?

And so its loss feels altogether more heart wrenching—it’s not just closing its doors. People here are here to say goodbye to a lifestyle, which perhaps explains the proportion of clothing we can see that’s black; a double entendre of a fitting tribute. Despite all of that, tonight is a celebration. Bang! is iconic, an institution. While the American emo nights of late were just a distant dream, Bang! was building an empire here Down Under. And now, after 12 years, it’s leaving forever.

While our emo souls are loving the self-indulgence of a huge send-off, after a few hours, Destroy All Lines’ Lydia Greenwood is pulling us into a room. We’re intrigued—she looks positively excited, but also rushed off her feet. Greenwood is behind a lot of the magic here, and it’s insightful talking to her about Bang!, its history and everything it’s become. But tonight, she seems to want to talk about something else entirely—have I seen the posters on display throughout the club saying “Who The Fuck Is Stay Gold?”, she asks? We have—and that’s when the penny drops. It’s mystery marketing.

But let’s rewind a little, shall we?

Treasure your maelstrom of memories—tonight is about hitting that dance floor one last time and paying our respects. We check out the bands—Danger! Earthquake! at their reunion show, alongside Atlantic and Letters to Amara, the last local acts to ever grace the stage in this way. There’s energy abounds in this room tonight; each and every artist is on fire. Then, we sing our hearts out to the My Chemical Romance cover act, who embody not just a band but an ethos in its prime when Bang! first came about. Sadly, they simply don’t play enough of the “old songs”—the Three Cheers stuff—but they’re incredibly good at what they do, and capture the band’s essence entirely as they headline the party.

Some of the more memorable moments would have been seeing idols such as Andrew W.K., Fred Durst, Oli Sykes or All Time Low – just to name a few – coming down to party and DJ with us.” But the local acts have been equally essential, and Bang! has played a pivotal role in launching so many careers.
[ Lydia Greenwood ]

Bands have arguably been the very fabric of everything this club has tried to do, which is something Greenwood is especially passionate about. “I think bands and music play a huge part in what we do every week. At the core of it, music is what we are about and what connects all of us here.” As Destroy All Lines grew, the touring arm allowed them to bring in major names and international acts for DJ sets, secret shows, or incorporating Bang! within a touring package. Reminiscing, Greenwood tells us; “Some of the more memorable moments would have been seeing idols such as Andrew WK, Fred Durst, Oli Sykes or All Time Low – just to name a few – coming down to party and DJ with us.” But the local acts have been equally essential, and Bang! has played a pivotal role in launching so many careers.

For Greenwood, this is something to be proud of. In terms of the bands that have graced the stage, “there are too many to count! We’ve had three or four bands play our stage every Saturday night for over 10 years. That’s literally thousands of bands who have played with us. Northlane, Dream On Dreamer, In Hearts Wake, Parkway Drive—just to name a few. Some of the more recent ones that have been really great to see on our stages within the last twelve months or so have been Polaris, Ceres and Slowly Slowly—who are all taking leaps and bounds in their musical careers”.

According to Cat Chadwick; “Bang! has been such a huge part of my life for the last twelve years. I’ve made the best of friends there and had nights I’ll never forget. It always felt like home to me”. She’s one of the hundreds of attendees who wouldn’t have missed tonight for the world (although unfortunately, some have had to—the lines were simple that big). So how has Bang! retained so many of its fans, throughout the varying stages of their lives? It’s simple. Over the years, Bang! has grown up with its audience, too. At its core, it’s been “a place that wasn’t about judgement, what you were wearing or who you were listening to. Just a place for everyone was the best thing that we could do.” But that doesn’t mean you can rely on the customers to keep things running the same, week in, week out. Greenwood puts this down to knowing their industry— “We definitely had to keep up with current music and popular culture trends. We’ve thrown parties for all of the fads … Pokemon Go, Memes and Tinder parties, but keeping up with current music trends as well as giving people the nostalgia they’re all craving has been key”.

Lately, we’re seeing changing landscapes. There’s a lot of dialogue surrounding diversity and inclusivity, which can only ever be a good thing. Greenwood agrees. “The ‘scene’ as a whole is becoming a much more inclusive place to be and a much more fluid line of genres interacting with each other. I remember growing up in the punk/ hardcore/ metal scene and it was very separated, and not an inclusive place to be for everyone. That’s what was so great about Bang! I guess—it didn’t matter where you were from, who you hung out with or what kind of music you listened to, it was this huge melting pot where everyone came together to enjoy themselves without judgement of whether you were listening to Slipknot or Taylor Swift. As well as this I’m seeing so many more women get into not just bands but behind the scenes roles which has been so refreshing. I’ve seen people having open discussions and talking about issues which before were ignored. I’ve been in the music industry for 10 years and I’m really glad that things are going to be easier for those that were marginalised, ignored or wrongly treated. We still have such a long way to go but it’s amazing to see that there are more role models on the stage and behind the scenes and people being held accountable for the way they hold their moral fibre in this industry now. It’s not okay to act like a dick anymore. I feel like we’ve been fighting for a better standard for so many years and it’s really starting to happen now. I hope that one day nobody has to fight anymore and it’s just the norm. I’m just really glad that it’ll be easier for those that come after us and that’s what we’ve been working towards”.

But why end Bang! now, when they seem to grasp how to stay current with such ease, and when it’s doing so well? For Greenwood, it’s simple. “We wanted to go out with a Bang!—excuse the dad joke. We’ve been running for so long, the place is an institution and something so many people have come to love and all good things must come to an end. We have a lot of new things going on to concentrate on this year as the company expands into some really amazing projects …”.

This may well be true, but for many, it’s a bitter pill to swallow. As the final ever songs grace the Bang! Airwaves to close out the night, there are more than a few tears, hugs, and general displays of unity. But Destroy All Lines won’t let us perpetual emo kids down. We now know that they’re behind the killer lineup of Good Things Festival, and we know that they’ve pulled off tonight in top form. This couldn’t possibly be the end.

So now all that remains to say is—who the fuck IS Stay Gold, anyway? The question is “what”, not who. And now, for a revelation. The answer to “what’s next” and the solution to our future Saturdays has been right under our nose the entire night. Greenwood exclusively reveals; “I guess the big news is that we are opening a band room, restaurant and bar on Sydney Road in Brunswick in October. We’ll be throwing some amazing parties in this, so it’s not the last you’ve seen of the Bang! team. It will be much more diverse than Bang!, seeing a hugely wide range of genres, bands, DJs and parties from all over the world running seven days a week”.

Have they ever let us down yet? Of course not. To learn more about Stay Gold, head to the Facebook page.

So Long And Goodnight, Bang! … well, sort of, anyway.