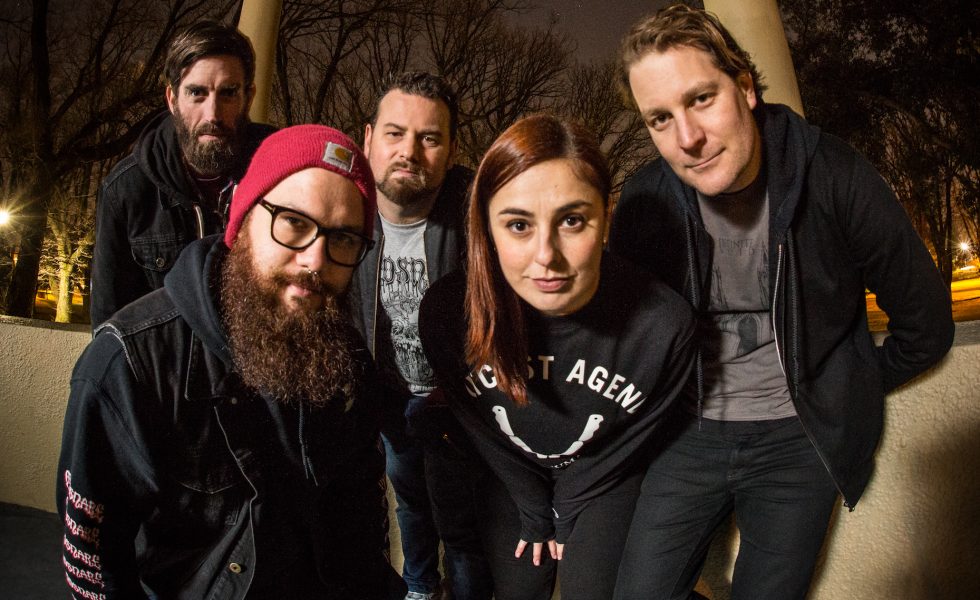 After a prolonged absence, Outright have hurtled back. Don’t get us wrong: they’ve been thumping shows and keeping hardcore alive at Invasion Fest and Unify alike. But there’s been no new music from the band since 2014’s debut LP Avalanche, and it’s finally time for that drought to stop. Their new EP, Holler, is as damning and punchy as fans have come to expect.

The band balance full time jobs, secondary bands, label duties at Reason and Rage (including doing everything themselves), as well as a number of pet dogs in the mix for good measure. Releasing an EP to make sure fans don’t riot sounds like a fair enough reason to us with those responsibilities. Bouncing onto the phone, one of Australia’s favourite frontwomen Jelena Goluza mentions Outright’s member shifts as a huge reason for the delay between releases, as well as the direction the band are about to head in.

“A big deal for us is the lineup changes, as well as the fact it’s been a few years since our last release too. It’s really great to be able to pick up that momentum again … [we also] found with every new song that we wrote, there were a lot more open possibilities to where our sound might go. It’s a new combination of songwriters, so we’re really excited to play with that.” She does give us a glimpse past a vaguely PR statement though, because when you run your own label and band, you can do whatever the fuck you want ya feel? “I would say this gives us the opportunity for the full length to extend on what we’ve learnt with this EP… but really I’m just impatient and it’s been too long!” she laughs. “I’m the only original founding member of this band and I couldn’t stand waiting. I honestly thought this would’ve ended a few times during the break, so for us it was important to keep moving.”

That blazing spirit is the heart of Outright’s material. Any fan of Avalanche can attest to Jelena’s fury that elevates her lyrics to another level. Their Holler EP cover is no exception: the depiction of raging femininity is perfect for the band’s overall message. Upon hearing Hysteria say the cover is “incredibly Outright”, Jelena erupts with excitement. “Oh YES! That makes me so happy! It’s really funny that you pick up on it. After having a record like Avalanche where you break through and then you have a massive gap, you kind of go through a strange identity… not crisis, but reformation. With the changes you also go: who are we now, where are we now, and what does that mean for the people who appreciate certain things about us? So that is a huge comfort to know that you still feel like it’s Outright here, but that you’re interested past the 7 inch and the new stuff coming. Hopefully it can build on that and show an evolution, because I certainly feel it does.” On the musical side too, bassist Brett still has a large part in songwriting. As Jelena says, “You’re still going to get the urgent energy and fast pace with some of those cool groovy licks too. The addition of Joel and Linc on guitar now means we can play around with that in a few new ways. So the foundation is there, but we’re excited to see how we can fuck with that too!”

Feminism is still relevant. Punk is still fucking relevant: we’ve still got shit to be angry about!
[ Jelena Goluza ]

Onto the core message behind Holler, we guess that Jelena is referencing an incident of street harassment where she literally threw her dog’s shit at an abuser because “that shit don’t fly but [her dog] Frankie’s does” she has mentioned in previous shows. She confirms, and delves into the record’s background: “Yeah the title track was inspired by an incident that happened about two years ago. It’s less about writing in the current climate: it’s that this is still our current climate. Feminism is still relevant. Punk is still fucking relevant: we’ve still got shit to be angry about! That cover and the title track: those issues are still relevant and it’s bloody disgusting I still have to write songs like this. But it’s such a harsh and true reality for all of us. We’re in a really key moment where we have the opportunity to make these changes right now to improve the lives of everyone around us. I’m not actually doing anything new. Women have been telling these stories for over half a century–gosh longer, but in the modern zeitgeist. Where at the point where stories are being heard. The more we share, listen and amplify these stories–not just women, I’m talking about our LGBTIQ community as well–people are actually feeling a sense of comfort, catharsis or support that would never come to light. I don’t feel I’m doing anything particularly revolutionary, but I’m grateful we’re in a current climate it can be received and we can contribute to culture and conversation where we listen to each other’s stories.”

If Holler doesn’t satisfy the Outright cravings enough, they’re not going to make you wait long. In addition to their upcoming set at Halloween Hysteria 2018, Jelena reveals that they’re already halfway through recording their next full length, and even have a surprise waiting in the wings. “We actually recorded an extra song that didn’t make it onto the 7 inch. So we’re working on a few things to get that out there as well. That’ll be something special, and that’ll build things up to the LP when it’s ready to go too. I understand the disappointment [about the lack of recent material] because I feel that inherently, but there’s a method to it I promise!”