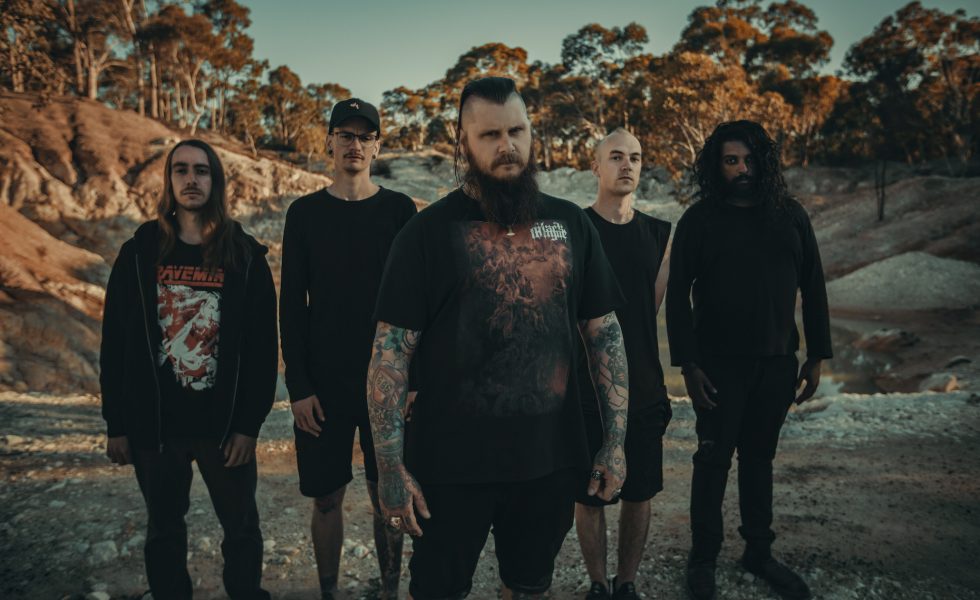 Perth’s Xenobiotic trade in a singularly nasty style of tech-death, layering fantastical musicianship with speed-dealer aggression and festering tones to a violent effect.

Hysteria caught up with guitarist Nish on a break from his day-job in disability services to discuss catharsis, neurotypicality, and standing out from the field with their hectic new album Mordrake.

Catching him on a brief respite from his regular gig, we talk about the challenge of reconciling a normal life with servicing the extreme, alien music that he helps create.

“It’s a balancing act like anything else,” says Nish. “I guess you could see it like two parts of a bigger picture. The hardest part is time; the time that it takes to be a part of a band. It doesn’t leave a lot of time for the more relaxed parts of living a balanced life. But reconciling that? Life’s pretty brutal, I guess. Life’s pretty extreme. Working in this industry really gives you an insight of how extremely cruel life can be. It makes you angry.”

Some people–their brains are not the same as a neurotypical brain. That key difference is reflected in extreme music.
[ Nish ]

“The problem is, I guess, a lot of the public–they want to turn a blind eye to this reality.” He sets a very serious but extremely friendly tone. “Some people–their brains are not the same as a neurotypical brain. That key difference is reflected in extreme music.”

“I guess heavy music exists for the same sort of purpose as any other music, but it’s there to deal with a very intense set of emotions that not everyone goes through on a day to day basis,” he continues. “We’ve all met intense people, especially in this scene, who elicit incredibly visceral reactions from normal people …” Nish trails off and corrects himself. “I say ‘normal people’, but that’s pretty insensitive. There are some strong emotional aspects that some people feel more. We’re there for those people that need something to resonate with.”

Music like that of Xenobiotic is dense and user-unfriendly. They are not a band who are taking you by the hand or softening a single blow. High-pressure technicality and bullet-sweating ferocity mark their music, and this creates a kind of delayed gratification that so few bands are willing to wait for.

“The catharsis for us comes from listening to it,” says Nish. “There is an enhancement of that very difficult music when you get to finally hear it. It’s really hard to cut loose when you’ve got a thousand notes to play in a very short amount of time.” He laughs a little. Cheerful bloke, really. “We don’t actually try to write music that’s difficult. We just write music that turns out really difficult, and that comes from wanting to push ourselves as musicians.”

It wasn’t always such a serious prospect for Xenobiotic and the success of the band is a surprise to the members more than it is to the listening public.

“The band started in 2011, playing around outside of Perth for a while. It was very much a fun kind of band.” His tone shifts noticeably as business-Xeno kicks in. “For the past couple of years, we’ve gotten our stuff together. After Prometheus we just said ‘let’s see how far we can go.’ We were absolutely happy–absolutely stoked–playing in the Perth scene.”

With the simple notion that they could play outside of their hometown, the boys from Perth set out to see what they could see, and ultimately landed on US cult death metal label Unique Leader Records, alongside such Australian luminaries as Psycroptic and Disentomb plus a frighteningly good roster of overseas talent. This puts the band in the unnerving position of trying to leave a mark in a stacked field.

“That was amazing, because so many bands have released albums on that one label. A lot of our influences were on that label. It was huge.” Nish begins listing a daunting catalogue of psychotic, earth-shaking death metal bands who he can now call labelmates and the enthusiasm is palpable. “It was like playing with the big boys. It came with that pressure. We didn’t have our sights on the rest of the world but … holy crap, we’re on the same label as some amazing bands.”

“Trying to stand out is probably the hardest thing we have to do.”

Mordrake is out now via Unique Leader.