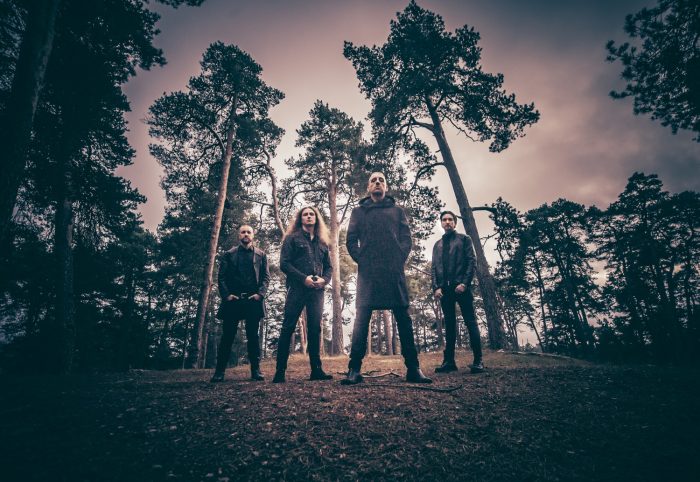 Formed in Finland in 2015 by ex-patriate Brit James Lascelles, Wheel have navigated the waters of modern progressive metal to become one the most promising and fastest rising bands in their field.

The release of their expansive and cerebral second album Resident Human is likely to elevate them further as it explores existentialist thought inspired by both recent world events and the work of writer Dan Simmons. James Lascelles takes us into the intriguing collective mind of Wheel.

Can you explain the main concepts behind Resident Human?

It’s not really a concept album, but there’s a theme that connects all the subjects loosely. It’s just this exploration of humanity in the modern world, both in the classical sense of existential crisis, and the modern sense of trying to make sense of the crazy landscape – especially online – that we’ve seen emerge over the past ten years.

A lot of things that are coming to a head now seem to be things that art and artists have been talking about and predicting for quite some time.

I think I made the mistake of thinking this was coming to a head in 2016 when the Brexit vote happened. Since then, everything’s been completely off the radar of being predictable! I would never want to think that I know more than I do. I’m just an enthusiastic amateur, observing what’s happening and trying to make sense of it all like everyone else.

How has the last 12 months affected Wheel as a creative unit?

Luckily we’d started working on the album before the pandemic had begun, so we were relatively inspired and it looked like we had shows to play and we already had the instrumentals done for Dissipating, Movement, Ascend, Hyperion and Resident Human. That was all done before our headline tour in February, when I was just writing stuff at home on the computer. Then with the guys – with Aki and Santeri specifically – we started tearing the songs apart and building them back up again, try to problem-solve and really streamline the structures. I guess the weird thing is, once the pandemic hit, while we were recording, the first peak hit in Finland and we were social distancing in the studio… it was very, very strange. It was like this head looking over your shoulder all the time. There was something very strange about what was going on, and I think it definitely bled into the feel of the album too.

How much extra time did you get to complete the album given the pandemic, and was it any kind of inspiration for you lyrically?

Instrumentally it went surprisingly to plan. The vocals took way longer than we thought. So when we finished tracking all the music in early May last year, everything just ground to a halt. All of a sudden, we didn’t have any plan for the vocals whatsoever. I just had to write something. I fell off the wagon. The wagon was going along and then it stops, and I fell on my face! It took me a while to get momentum back and find some subjects to fit the songs, because we’ve always worked it where the mood of the music reflects the lyrical themes. Especially songs like Dissipate and Hyperion, we needed really big expansive subjects to fit the music. Both tracks ended up being inspired by the Hyperion Cantos by Dan Simmons – not the story so much, but the themes running through the book. Specifically, Hyperion is about mortality and how we’re all on this linear journey from birth to death and how, through our own experience, we forget that everyone else we meet is going through the same experience of trying to understand or answer the some existential questions we have about what comes next, and are we choosing the right things?

The mood of the tracks fit the subjects really well. It took a while to find the subjects, but when we did, we knew they were the right ones. We’re just hoping that maybe someone who hadn’t looked at this stuff this way maybe looks at this and gets something good out of it.
[ James Lascelles ]

I was just thinking how ironic it is, when you hear the media describe different cultures, we’re so quick, socially, to dehumanise people we don’t understand, but the old common denominator is the shared journey and the fact that we’re all going the same way. You can’t slow down or change direction. The consequence of that is gratitude that, however long we have, it’s loaded with significance because it’s likely that’s all we’re even going to know.

Dissipate, the first track on the record, is about the indifference of the universe, and even though it seems hostile, once you leave the safety of Earth, you’re in a vacuum with sub-zero temperatures and there are cosmic events that could destroy our planet in the blink of an eye. We think that everything’s out to get us, there’s a need for this nihilistic sense of despair. I propose an alternative viewpoint, which is that we are absolved of any cosmic responsibility. That means that everything we do, everything we choose, the way we treat other people, how we spend the time we have, is overwhelmingly loaded with significance and value in a way that I don’t think I appreciate. None of these subjects were really inspired by the pandemic, but the time we were allowed because of the pandemic gave us time to really explore ourselves.

That sounds very much like the opposite of nihilism – creating your own meaning and significance in spite of the distant coldness of the universe.

Simmons’ work is very cerebral and loaded with meaning, so you chose a strong source to draw your inspiration from.

Honestly, I hadn’t read anything else by him. I knew nothing about the guy. I’d never even read much science fiction before. I used to read a lot of fantasy, because we write a lot of stuff about social events and what’s going on in the world around us, and it’s quite draining so I like to read a lot of fantasy. So after reading that stuff for four or five years, I basically ran out of fantasy books on my reading list, so I thought I’d try something else. And I picked a win. I don’t believe in fate, but I think that, at the time, it was just fantastic. A lot of the themes of the book are incredibly relevant even though it was written in – I think – the early 90s. I would recommend it to anyone who’s looking for some escapism. It’s a really, really good choice.

You say there’s no such thing as fate, but so many events seem to be coming together in some kind of weird synchronicity that could suggest that there is something to it after all.

I think it’s a really personal choice and that’s something that I wouldn’t say that I thought I had the answers to. Like I say in Hyperion, the only ones I would discredit would be the ones who say they know the answers, because they’re lying! These are the real questions, I think, about what existence is, and what is consciousness and does any of this have any meaning? I’d argue that yes, it does. Every good thing that’s ever happened to us – none of it’s a given, none of it’s to be taken for granted. Our society is literally built upon telling us we don’t have a lot, and we should want more, and what we are is not good enough. I think there’s a real dissatisfaction in the social media age, especially off the back of the advertising age, as I like to call it, and about our expectations and this sense of failing. It’s really hard to disconnect myself from that, so I’m going to say I’ve figured it out and no one has. This is literally the stuff I was trying to put together in my own mind with the lyrics, and it was kind of cathartic to do so.

There’s a lot to cover there. Essentially you seem to be saying that we can find meaning in anything, and that Wheel is another way for some people to find some kind of meaning through your music and lyrics.

We’re certainly hoping so. The mood of the tracks fit the subjects really well. It took a while to find the subjects, but when we did, we knew they were the right ones. We’re just hoping that maybe someone who hadn’t looked at this stuff this way maybe looks at this and gets something good out of it. Steven Wilson said a long time ago that the role of lyrics is to point a mirror at society and if you do it right, someone’s going to see their reflection in that mirror. Hopefully we’ve achieved that.