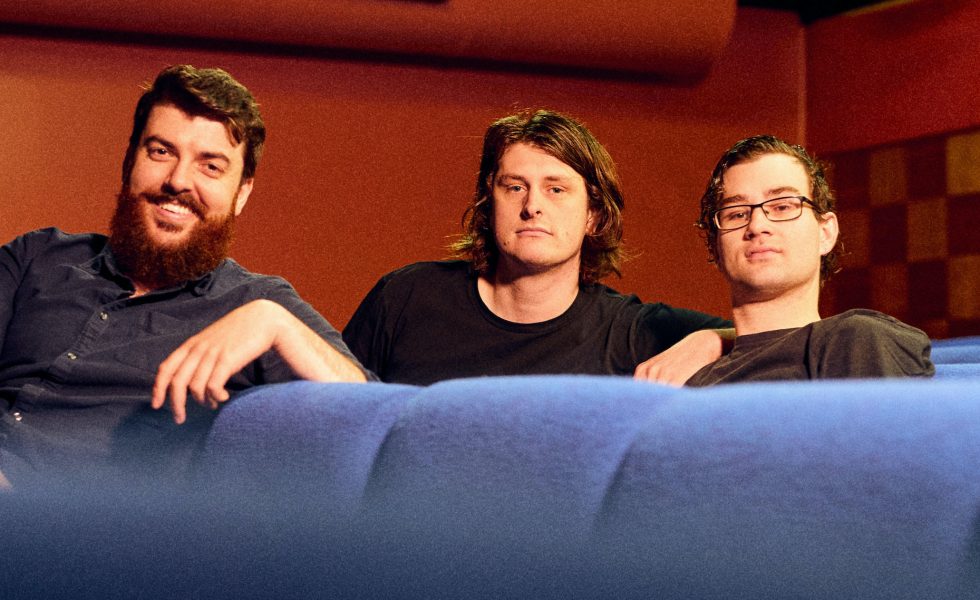 Capturing the multifaceted human experience and various contrasting rock elements, the latest album The Echo from Hobart trio Verticoli is a sonic chocolate box you’ll want to keep coming back to.

MORE: NOFX: Fat Mike Chats Double Albums, Being Ghosted By Blink-182 & The Emotional Journey For The Last Ever NOFX Shows // DUNE RATS: Dance Lessons and Thinking Outside The Box REVIEWS: SLEEPING WITH SIRENS: Complete Collapse // blink-182: EDGING // FREEDOM OF FEAR: Carpathia // ARCHITECTS: the classic symptoms of a broken spirit // SLIPKNOT: The End, So Far // THE GLOOM IN THE CORNER: Trinity // THE COMFORT: Experience Everything. Live And Die. // VERTICOLI: The Echo

From raw grunge to pounding rock anthems, and stylistic nods to everyone from Rage Against The Machine, to Pixies, Pearl Jam and beyond, The Echo is as polished as it is rambunctious; in other words, a bona fide rock’n’roll outing from a group who entirely understands the assignment when it comes to balancing authenticity and distortion without any tedious posturing. And, as Verticoli vocalist and guitarist Sam Hunn recently revealed to Hysteriamag.com, Verticoli are as equally stoked as their new and old fans are to have the album out and about in the world.

“It’s been awesome to get this album out there,” shares Hunn of The Echo’s recent release. “While our recording schedule was pretty rapid, we spent a lot of time demoing the songs, doing the pre-production thing and really honing the mixes to best represent what we were trying to achieve.”

“The reception we’ve had so far has been great,” Hunn continues. “We’d really love to keep expanding our audience, which I think most bands will tell you is a constant challenge. But we’re very chuffed with the response so far!”.

Balancing introspection with fiery moments across the 10 tracks lying in wait on The Echo, this latest release for Verticoli certainly wasn’t their first album or EP rodeo, with 2013’s Verticoli, 2015’s Punching Bag, 2017’s Free Will, and 2021’s Heavy already in their wake. But, as Hunn reveals, The Echo saw the group shift away from previously established processes, instead embracing a dedicated producer, Jon Grace, for the first time in their careers – and also shedding ideas inspired by a certain Led Zeppelin guitarist.

“We worked this time round with Jon Grace, Jon was someone we roped in as a dedicated producer,” says Hunn of The Echo’s production process. “Previously, we’d worked with people who were engineers/producers as a combined role. And while they were very capable, Jon brought a particular focus to the table, and a very encompassing approach to pre-production and recording.”

“We’d also tried to do the ‘band as a producer’ role in the past, which is something I picked up from Jimmy Page, and which, to be honest, is a bit of an ego trip for most people who try it. We certainly benefited from the outside perspective! Jon and our engineer Cam Hull both did great work in opening our eyes and ears to new things and getting outside of our own way.”

With 10 killer-no-filler tracks on The Echo, there was also another distinct shift for Verticoli in the writing phase, as Hunn elaborated: “There was no real overarching approach or ‘vision’ in writing this album, rather it was just a matter of churning out as many demos as possible, and choosing the strongest songs. It’s the first time we’ve done that, previously having pretty much recorded everything we’d written at that time. This time around we had four or five off-cuts, which gave us the opportunity to quality control a bit more and cultivate a certain flavour.

You just gotta know, it ain’t a long album! And that was intentional. Anything that didn’t service the song was left on the figurative cutting room floor.
[ Sam Hunn – Verticoli ]

Approaching a new album for any band is no small feat, and for many over the past few years, the reality of life as a musician entirely flipped on its head and came to a screeching halt. And while the world has begun to somewhat return to a more familiar setting in terms of live music, touring and creating in general, Verticoli actively spent 2022 channelling the uncertainty of the past few years into not only creating a new record, but, as Verticoli drummer Will Colvin shares, also reconnecting with their ultimate passion.

“Our mission this year was to really have a crack at writing, producing, releasing, and touring the best music we could, and to dedicate as much time, energy, and money to it as we could,” says Colvin. “We were obviously quiet and heavily restricted over the last couple of years with COVID, so it was taking our chance to spend time on what we love. There is not an overarching theme to the tracks, but the album itself is a dedication to our love for music.”

With a smorgasbord of styles primed to tantalise your ears throughout The Echo, much attention has been given in the media of late to the band’s noted 2000s-esque influences bubbling away on their latest release. But, as Hunn shares, their influences expand far earlier than just the turn of the millennium, coincidentally also resulting in their most approachable release to date.

“The 2000s thing is interesting. It’s been remarked upon recently, but we don’t really have that many 2000s influences,” says Hunn of The Echo’s key stylistic inspirations. “I think we incidentally have a bit of a riff similarity to Incubus, who were never really an influence, as great as they can be. And we love Karnivool, but our influences are probably more rooted in the 70s and 90s as much if not more so. There were certain songs that were inspired by certain bands, like Silent Scream which was inspired by Refused and Turnstile. The Echo was inspired by a band called Jawbox, and Surrender is a bit of an homage to Rage Against the Machine, particularly Evil Empire. But otherwise it’s just a big cauldron of influences coming together.”

“We’ve always liked quite direct, raw sounding recordings, with just enough polish to make them digestible, and this album is probably the most digestible thing we’ve done yet.”

Lyrically traversing everything from depression, paranoia, love sickness and, as the band’s press material states, “getting punched in the face”, The Echo certainly wields its fair share of hard-hitting moments. But the permeating sentiment behind any Verticoli release stems beyond any vanity-based intentions, as detailed by Hunn: “We’ve said it many times before, and so many bands have said it, but we’re just trying to be our favourite band. Our band is about doing as much as we can, doing it as honestly as possible, and just having fun. We’re not really trying to change the world; we just want to make big rock music that we think is sick, and that other people might be able to enjoy too.”

“This album pumps,” adds Colvin. “Hopefully people take away that they need to get along to a live show!”.

Speaking of live shows, Verticoli’s album launch shows for The Echo will also mark a first for the band, with the trio set to play The Echo in full for fans.

“We’ll be playing the album front and back, which is cool,” enthuses Hunn. “Even on EPs we’ve done in the past we haven’t wanted to do that, so the fact that we feel like we can play every song without going back to our old stuff I think is a good testament to the album!”.

And while the group will be performing every single track from The Echo as they christen the new album live onstage, there’s one key song on the new release that holds a particularly special place in the hearts of the entire band.

“The Echo is pretty much everyone in the band’s favourite track,” shares Hunn of the new album’s title track. “It was written at the very last minute, in the days leading up to going into the studio. We just wanted to make sure we had every song that we could possibly record ready to go and on the table for consideration.”

“The Echo as a demo was pretty much the same as the final recording, however much less polished and refined. It was lyrically the most pertinent of all the songs, being about growing up and idolising musicians, who often died young, and reflecting on the fact that they didn’t necessarily set you up particularly well for your late 20s/early 30s. That message is juxtaposed with an almost religious love for music, and finding comfort in it. The song is really about that contrast.”

Closing out 2022 armed with a brand new album and some live shows for good measure, Verticoli’s gaze is now inevitably turning to 2023, with their biggest focus ultimately centred around keeping their burgeoning momentum going.

“We’ve got some demos!” shares Hunn of the band’s potential plans going into the new year. “We’ve got a fair few in fact! No studio time booked yet, but we’re definitely always trying to keep the creative muscle toned. We’ve got a B-side from The Echo sessions that might make its way out into the world at some point, it still needs some parts tracked though. It didn’t make the album more due to ‘vibe’ than quality. It’s a cool track that just didn’t match what we were going for with the album. We spent forever sequencing the thing so it feels good front to back!”

“We’ll also be keen to hit up some festivals in the warmer weather, and of course, plenty of gigs!”

And for those out there who haven’t yet grabbed a listen in full to The Echo, Hunn has some useful parting words to help you seal that deal.

“You just gotta know, it ain’t a long album! And that was intentional. Anything that didn’t service the song was left on the figurative cutting room floor. So if you’re thinking “do I have time to indulge” this 6-headed 3-piece from the bottom of the map – the odds are in your favour. Thanks for listening!”

The Echo is out now.