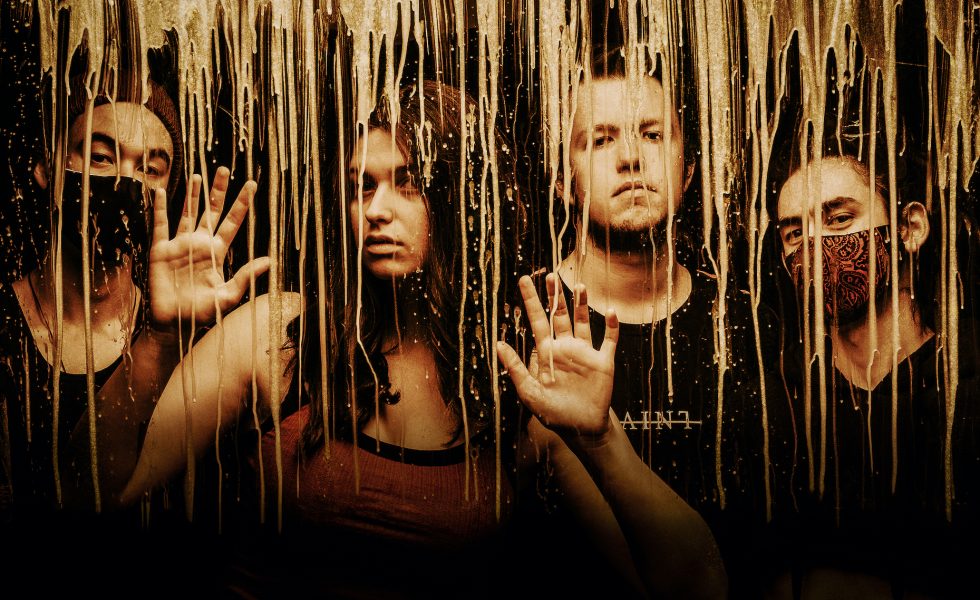 Already a burgeoning force to be reckoned with in the modern Australian musical landscape, Sydney alternative maestros Reliqa are taking no prisoners in 2022, with a string of high profile live shows already under their belts this year as well as the announcement of a brand new EP I Don’t Know What I Am, due out on Friday 16 September.

A relentless, polished and explosive endeavour across the space of six tracks, I Don’t Know What I Am furthers Reliqa‘s stronghold as one of the most affluent alternative acts in the modern scene, with sharp riffage, brisk drumwork, djenty interludes and the steadfast stylings of vocalist Monique Pym lying in wait on the group’s follow up to 2018’s Eventide EP.

To accompany the announcement of I Don’t Know What I Am today, Reliqa have also released a brand new single and music video for the EP’s midway hard-hitter Safety, which also wields a ferocious feature courtesy of Make Them Suffer‘s Sean Harmanis.

Boasting everything from rap-rock vocals to chuggs, blistering percussion, menacing melodics, sweltering breakdowns and caustic beauty levelled up, via the addition of Harmanis alongside Pym’s potent vocals, Safety is entirely not playing it safe in the best way possible, with Reliqa wholeheartedly declaring their passionate new sonic chapter via their new track, as the band explain: “We’re so excited to be taking the next step into this new era of our music, and collaborating with Sean might just have been the best way to do that. Two styles have collided in a really cool way here, and we think Safety is the ultimate showcase of all the passion we’ve packed into this EP.”

Produced, mixed and mastered by Chris Blancato, Safety resoundingly marks an unforgettable glimpse into Reliqa’s impending new EP I Don’t Know What I Am, with the end product commanding everything from oscillating prog (title track and opener I Don’t Know What I Am) to Periphery-esque wizardry (The Ritualist) and ethereal, immersive ballads (Second Nature).

Already in command of a dedicated and evolving fanbase and two EPs under their belts in just a few short years, Reliqa have continuously flexed their knack for powerful and clever craftsmanship, attracting eyes and ears all over via their aggressive riffs, symphonic soundscapes and gripping melodics. Signing to Open Door Management back in 2021, Reliqa opened 2022 as the main support for Thy Art Is Murder in Brisbane, performed at Full Tilt Festival in Brisbane and joined prog luminaries Caligula’s Horse for their recent Rise Radiant tour in Adelaide, Gold Coast, Brisbane, Sydney and Canberra.

Currently in command of three tracks clocking over 1 million streams on Spotify (Doomed, Mr. Magic, and The Halfway Point), Reliqa have also previously shared stages with a sea of iconic artists over the years, including Sevendust, Northlane, Thornhill and Void Of Vision; and fans can imminently catch the quartet onstage armed with their brand new single at the upcoming Monolith Festival alongside Karnivool, Cog, Ocean Grove and Plini, kicking off this Saturday 13 August at Eatons Hill Hotel in Brisbane.

While no one could’ve foretold what challenges would face artists globally over the past few years, Reliqa have greeted every hurdle and emerged in 2022 in full control of exactly who and what they are as a band in this present moment, as the band concludes: “I Don’t Know What I Am is a culmination of equal parts hardship and absolute love for our craft”. I Don’t Know What I Am will release on Friday 16 September, with a few more Reliqa surprises still to come before the full EP unveils.