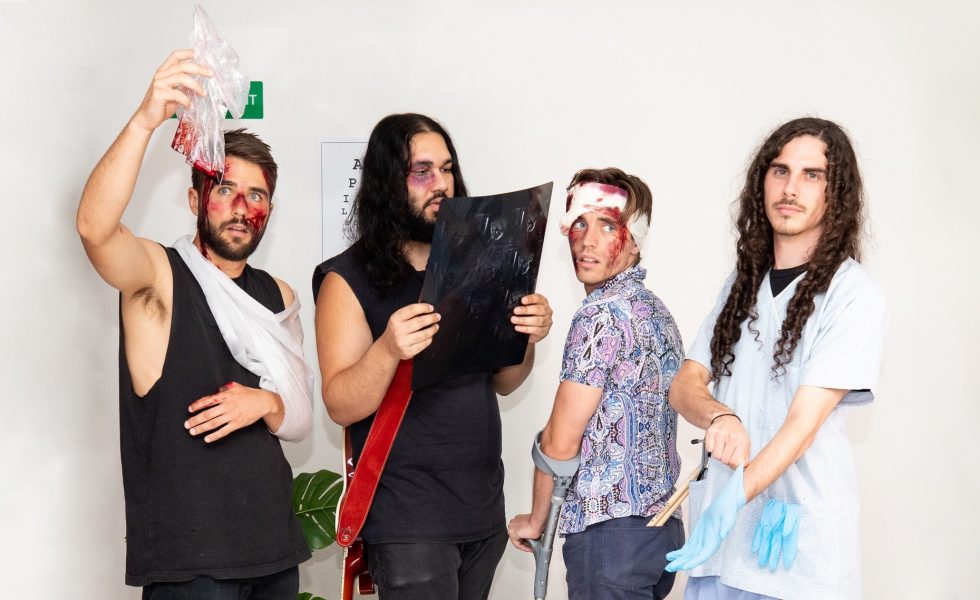 PREMIERE: PATIENT LOUNGE // In Conversation With The ‘New Man’

Brisbane’s prog metal wunderkinds Patient Lounge have toured with chart-toppers and stadium-fillers all on the back of single All You Want. They now following it up with pop-prog symphony New Man, which you can listen to right here.

The band has toured the east coast, hand picked for playing Brissy’s staple Dead of Winter festival last year, and opened for massive names like Halloween Hysteria alumni He Danced Ivy, Osaka Punch, Smoking Martha, Haken, Wolfmother, and Pop Evil—all this in under 12 months of operation. Add to a bumper year, they nabbed a #41 spot in 4ZZZ Hot 100. Another rocket firing up the ascendancy of Aussie prog metal alongside names like Voyager and Karnivool, if you haven’t zeroed in on Patient Lounge being the next big deal, now is your chance.

We spoke to drummer Nick Keogh-Peel about the new single, their seemingly overnight popularity, and the renaissance of Aussie prog; even that Eurovision entry…

Hysteria: This is a real belter. I mean it’s seven, eight minutes long and there’s so many different sounds, movements … it’s like a mini-album. How did you put it together?

Nick: The main riff that is kind of formed the intro of the song and the bass riff that kind of comes back a third time throughout of it. Eric [Moors, guitars] and I put it together maybe three or so years ago, something like that. And we’ve just been sitting on it. Our writing processes always a little bit … If we just kind of get in a room and just throw ideas out and jam a song for hours and hours and hours and hours, and it turns out into something we like.

We try to work really hard and we take a lot of influence from bands like Tool and Karnivool and stuff like that too. Sometimes they have pretty long songs but they’re really referencing themselves over and over, throughout the songs. So instead of 12 different completely unrelated riffs, we try to have 12 riffs that sound different but actually have a connection to each other.

You guys seem to have emerged at the right time. There seems to be an Oz prog renaissance going on at the moment. The world at large can’t get enough of it. Voyager was shortlisted for Australia’s Eurovision entry …

Hooley dooley! I didn’t know that.

Well, we’ve got a couple of things in the pipeline. We’ve got another single, which quietly should be out in, I think, the first half of this year.
[ Nick Keogh-Peel ]

Yeah, I don’t think we even really noticed that was happening but it’s pretty exciting to hear that.  We just do it because we like it. We think a lot of other people seem to like it too.

So where did Patient Lounge begin musically?

For me, it’s just what I’ve always listened to. I grew up on Tool predominantly and then kind of a little bit later and other kind of what I heard from bands like The Mars Volta and stuff, they were just my bread and butter growing up. For some God unknown reason, I don’t know how 10 year olds get into that kind of shit. But that’s what happened. That was me. But then the other fellas all come from really different places. Zach and I have been friends since we were about 10 or 12 and I was forever trying to get him to listen to stuff like that and get him away from AC/DC and the Red Hot Chilli Peppers. It took a really long time, but after about a decade of harassing him, he finally capitulated and agreed that prog was actually pretty cool.

Yeah Zach, what took you so long?

So for him it was a slow go and I think that helps with the way we write. Sometimes the other boys and I who’d been into the heavier stuff and more complicated stuff for a long time, can really get stuck on an idea and really complicate matters unnecessarily. And then Zach would just come in with some flat riff that’s super simple, but sounds huge, and we’re like, “Fuck, we should’ve been doing that from the start. Why are we trying to do all of this random modulation stuff when we can just have a fat riff.” 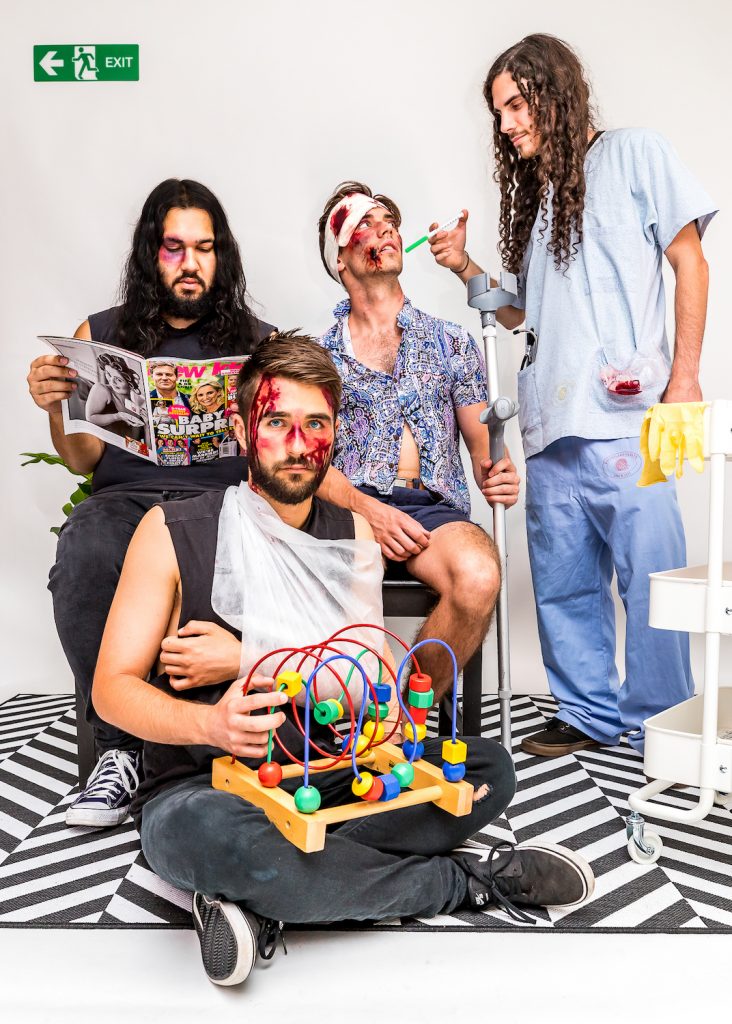 You’ve only been around for about a year and you’ve been in the 4ZZZ Hot 100, played alongside some huge names. That’s a fair good effort.

Yeah, we were super stoked with that. Well I mean, we’ve kind of been playing together in various forms of this line up for a while. Sometimes it’s under different names and it’s slightly a different style and stuff, but at the start of last year we were like, “Right. Let’s pick a name we’re really going to stick with. Let’s pick a sound we’re really going to stick with and start taking this seriously instead of, kind of, fluffing about.” So, it was nice to see that once we really knuckled down and went, “Let’s make this a big year.” Stuff started to actually happen. So we’re super stoked with how well all you want. I mean, it’s still only tiny little independent release but it’s not a bad platform I think to continue building on.

Those gigs. Some of those gigs man, they just come out of nowhere. You’re just sitting around thinking, “I wonder when something else is going to happen.” And then next minute, we get asked to play with Haken. We were massive fans for years and years and when we got that email, it was a pretty surreal experience.

Are people cottoning on to the live show? Is that your biggest draw card?

I certainly think so. We’re actually, we’re really, really proud of the live show and the energy that we bring on stage. It’s something that we think has been, it’s nice and promising when get into people’s brains and stuff. But sometimes you go and see a prog band and be like, “Man, I wish you guys were just doing something.” This music is so amazing and I understand we’re meant to be standing here and listening to the music, but a little bit more of that kind of classic rock and roll like eighties’ prog and seventies’ prog when they were just absolutely going nuts on stage and light up their keyboards on fire and shit. We kind of try and bring that insanity back to a live show. We’ve worked really hard on it and pretty happy with how far its come along.

What’s next for Patient Lounge? An album? A tour?

Well, we’ve got a couple of things in the pipeline. We’ve got another single, which quietly should be out in, I think, the first half of this year. I think it’s going to be straight onto the EP, probably. Maybe four or five songs. We’ll see how we go in the studio, but we’ve definitely got the content, dance record, but sometimes the hardest part is just checking your favourite four so we’ll see how we go with that. Then just play, play and play and play. Get as many cool festival slots we can. We’ve got about, we’ve got some people working on that, which should be fun. Hopefully get some cool gigs. Slowly get in front of a whole bunch of new eyeballs. We’re going to take a bit of a left turn and go into some online stuff. See if we can do some cool live playthroughs. And maybe some covers, just some old classics, some old rock and prog classics. See if anyone anywhere out there on Facebook thinks it’s cool.

You could cover something and make it your own. Just don’t cover Wuthering Heights in the original key, Toehider already did that.

Totally. Wait, what? Is that real?