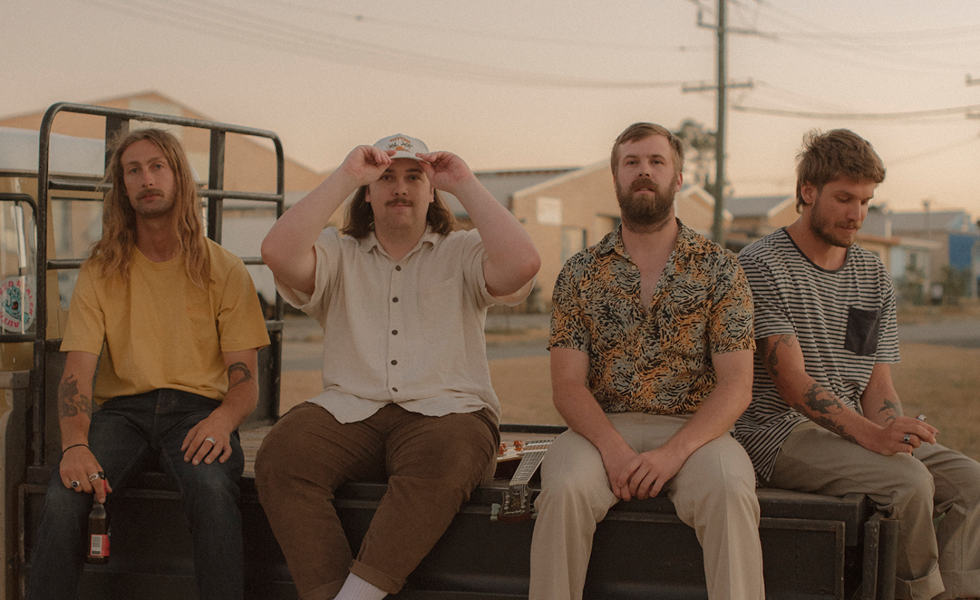 PREMIERE: KING BROWN // A Track By Track Guide To ‘Out In The Desert’

They are comprised of brothers Ash Kennedy (lead guitar) and Shaun Kennedy (rhythm guitar), Brendon Cross (vocals/ drums) and Ben Salmin (bass), and they’re now gearing up to release their debut EP, Out In The Desert.

Before it officially hits the world, we got Ash Kennedy to guide us through each track.

Moto is about jumping on your motorbike and not having any plans. Just open it up and let it take you wherever you feel. It evolved from a similar demo song sharing the same chord progression. Over time the tempo was upped, and the three-string slide down the neck set the song firing off. The verse features a cyclic double-stop riff that slinks through the blues scale before the chorus comes again and roars down the highway. Moto is our oldest song on the EP.

Way Down is about constantly having to pick up the slack and carry the weight of others. There is only so much one person can take before it becomes too much. Way Down had been in reserve for some time now, waiting for its time to come. The song was born during a jam session, with Shaun playing the chords to which I improvised the guitar melody. The smooth opening soon breaks away into a thundering rhythm section and layered guitars descending the neck. I wrote the guitar solo from scratch, rather than taking bits and pieces from demo versions or earlier recordings which is what usually happens.

Ben’s bass trickles down to start off the free-wheeling Matter of Time. The song rolls through the verse before lifting into the chorus, aided by guitar, organ and backup vocals. The solo ebbs and flows through the Dorian scale and carries the song out to its conclusion. The lyrics are based on when you first lay your eyes on that special someone and want nothing more than to go talk to them and hoping they will give you the time of day.

Breakthrough started as the intro riff and grew around that base. It was created in a jam and came together quickly. The rhythm guitar holds the course as the lead and bass manoeuvre throughout. The verses chime along with the drums before launching into the driving choruses. This song came really fast, humming a melody and came up with some words, and that’s all it took. It’s a super upbeat tune that had a real good vibe to it. We’ll let you interpret the song in whatever way you like.

Oyzo probably took the longest for us to get how we wanted it. Once we put all the pieces together, we added a percussion base of guiro, tambourine and shakers. The song is based on the main riff, with the lead guitar weaving in and out of the song as needed. The song slows to a circular chant followed by a biting guitar solo that transitions to the multi-layered vocal outro. Thematically, whether you are out at a pub or in your backyard, this song is about going round for round with your best mates or someone you may have just met and enjoying every minute of it.

This song is written from the perspective of a stray dog that is more than happy doing its own thing, not caring about what people think. Somewhat of a Metaphor to not worry about what others think and to be happy with what you have and who you surround yourself with.

I wrote Lucky based on a progression I had made up on my acoustic guitar at home one night. From that base, all the other parts were written around, and a demo was made. The song comes in with Shaun’s reverbed guitar, and soon the band builds up to join in. The song features stripped back verses that swell up into organ backed choruses before reaching a harmonised guitar solo that builds up into the final chorus and exit to the EP.

Purchase and stream King Brown’s Out In The Desert here.