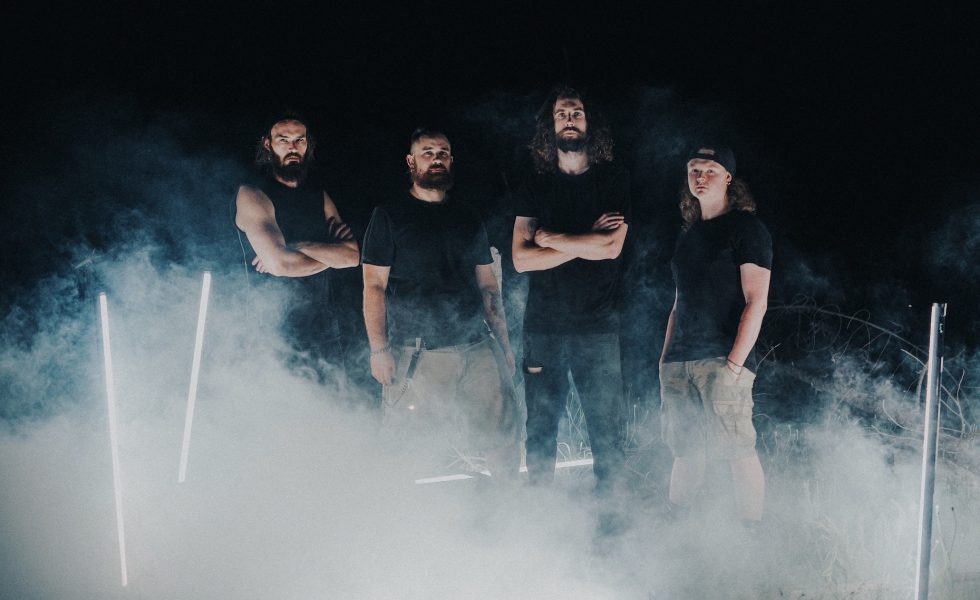 The brand new music video for Running Blind, the latest track from one of Sydney’s leading sons of thrash metal, Flaming Wrekage, is one that will be quick to resonate.

It won’t just be for the ferocious death metal melodies and lyrical intensity, but for what vocalist Dave Lupton says is a song all about “not bearing the pain but using the hate. There’s all sorts of challenges you face as a band, and just in life in general,” begins Lupton. “It’s almost like a mantra.”

“Something as strong as hate, [and] I know it’s a strong word, it’s equally strong in energy. If you can channel that into something creative–in our case, playing on stage or writing music–it’s a very powerful energy, and I think you can use that in a really positive way.”

For Flaming Wrekage, the negative experience that fuelled the positive outcome that is Running Blind stemmed from an external display of ego, a poisonous style of character in people the band toured with in Europe some time ago. “Let’s just say there were a few egos at play there” says Lupton. “It was tough to deal with that situation that we were up against. On tour, you’re seeing the same guys every day, and it was getting frustrating.”

“We had a bit of a meeting and decided, ‘There’s no point picking fights, here. Let’s just get up on stage and rip it harder and harder every night.’”

In the accompanying official music video for Running Blind, there’s an elemental parallel to the emotional aspects of the song. It’s not just the location Flaming Wrekage chose for filming the video for Running Blind, but it’s the stance they take as they deliver the track that echoes a particular concept of strength, which is also a testimony to the character of the guys in the band. “The first video we did on this album [The Voiceless] was a bit more of a conceptual thing,” says Lupton. “For this one, we really just wanted to capture the performance. And the environment we performed in very much complements that.

This album, it’s not a concept album, but there’s a lot of overlapping of different concepts that kind of come together in an interesting way.
[ Dave Lupton ]

“Very rugged, even the shooting process was ideal for the track, really. It wasn’t an easy one–it was 42 degrees!”

“The second half of the clip, the darker sections of it, it was in this big clearing with all these jagged branches and we were lugging Marshall amps across this brutal landscape. Even the frustration of that made us go even harder during the clip.”

“It all came together and really, really encapsulates the vibe of the song.”

That mirroring of the elements with emotion is evident not only in Running Blind, but Flaming Wrekage’s lead single, The Voiceless. That track featured a lot of darkness, literal playing with fire and a close-to-home inspiration. This heavy metal take on Yin and Yang is a concept we can expect more of when Flaming Wrekage drop their third studio album, Cathedral of Bones, due out 25th February. “This album, it’s not a concept album, but there’s a lot of overlapping of different concepts that kind of come together in an interesting way,” explains Lupton.

“I didn’t want to go too far down that track and make it a concept album where every song is a piece of the puzzle, because there’s always 50/50 that, and then more personal stuff that’s happened to us together as a band.”

“It all comes together to create a tapestry that’s all very dark, very direct and upfront. The lyrics and the music complement each other very well in that way. I’m very stoked with how the lyrics came out for this one. I think there’s some really interesting topics that I haven’t delved into before–I’m really happy with it.”

In exploring new themes, Flaming Wrekage found they were also exploring different styles of songwriting and playing. “This one was a bit more of an all-in effort–I don’t think we’ve ever written like that before.”

“This is the most stable and solid line-up we’ve ever had as a band. This [album] was a direct effort from everybody to get in and have an impact on the final product.”

“When you’ve got four people coming together on something like this in that way, it’s a really powerful force, and I’m really stoked with how Cathedral of Bones has come out.”