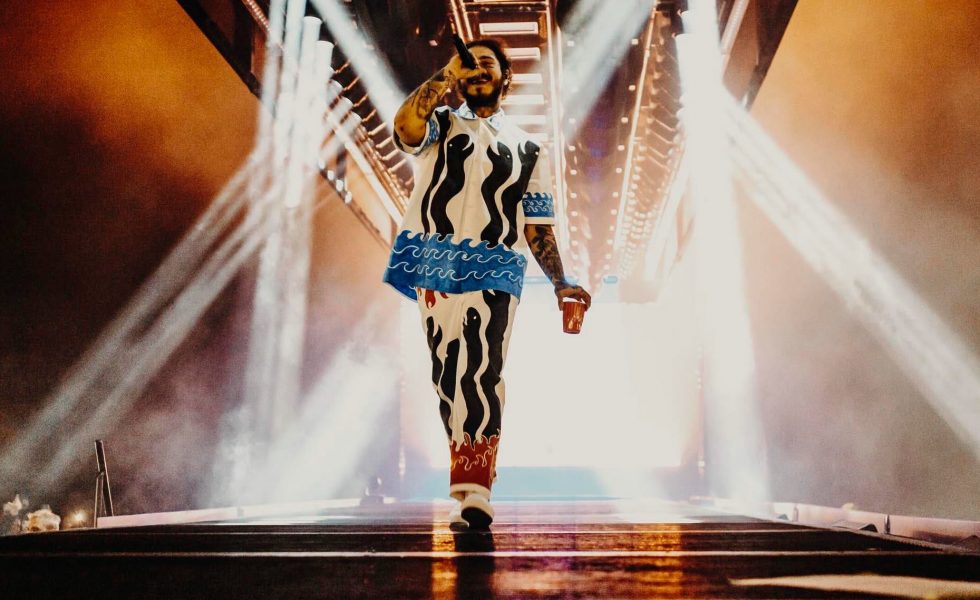 Not like deathcore and rap have ever mixed, but the hypebeasts wearing their logos out the front of Post Malone sure think they do. The man is so ubiquitous that you’d be hard pressed to find anyone who doesn’t have one favourite song. If they don’t, they’re lying. Post has managed to create a self proclaimed “sauce” that’s sold so many records, the man could sit on a chair built of platinum records.

As an opener, Tylayaweh really shouldn’t be as entertaining as he is. But his young “lil” rapper of the month charm can’t help but beam even from the seats. He calls for a moshpit and gets absolutely nothing in return. The kids need their prime Insta shots bro, you’re not gonna get them moving. Well that is, unless Tyla decides to hop on a security guard’s shoulders and jump right into the middle. The kids have no clue what to do when he’s pushing them back but after he drops a tribute to XXXtentacion with the dulled bass to match and a swung shirt above his head, now they’re getting the idea. Somehow effortlessly moving from trap to RnB to mumble, Tyla has more energy than an opening act with the lights on usually deserves. Based on the absolutely tanked girl next to us who screams when he asks who’s a Gemini, it’s a yes from the teenies. That’s notwithstanding the fact he asks if anyone is a Scorpio/Taurus/Cancer/Capricorn and lists almost every other star sign before launching into his track Gemini. It’s a slow burner that’s topped by Michael Jackson worship SHE BAD complete with moonwalk and MJ spins. At one point he goes to turn, slips and collapses, then sits up with a huge grin. “Yo did anyone get that?! I totally just stacked it bro!” he beams to the crowd. It’s a win in our books. 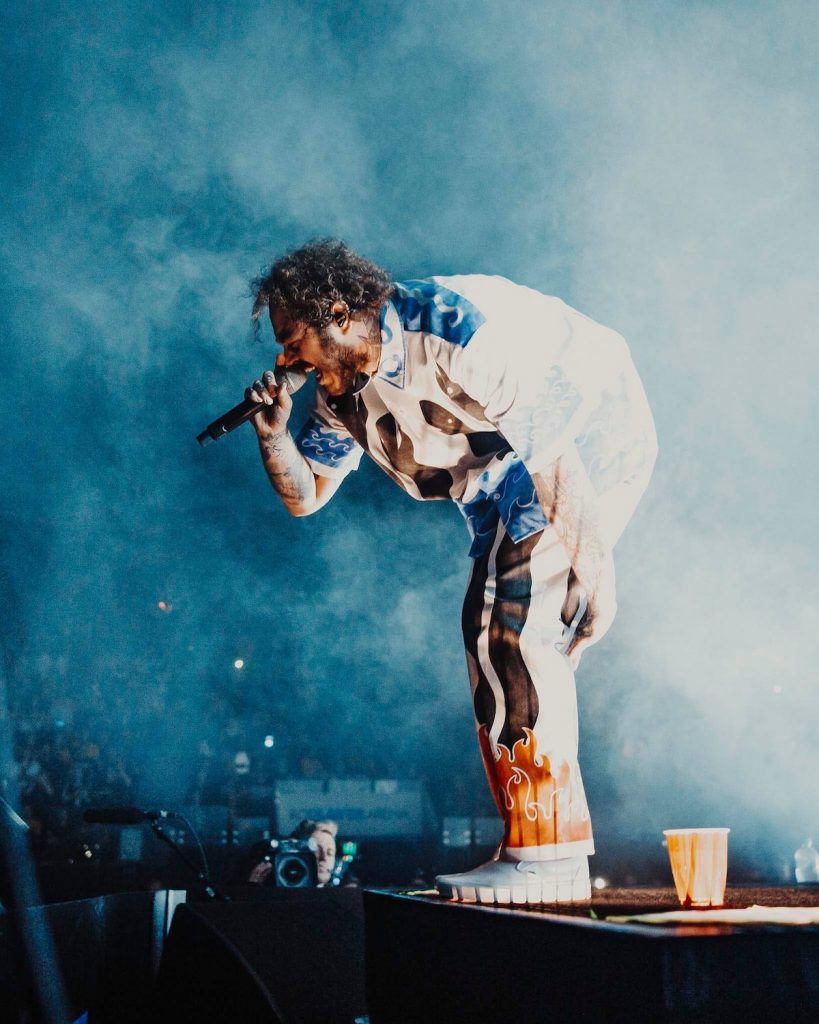 For someone who really should be feeling more love, Jaden receives absolutely nothing from the crowd. Whether it’s because his music is more introspective sadboi than hype blast, the audience refuse to move. For all the claims they likely make about their clout, the fact that Jaden is at the forefront of young creatives is completely lost on the sea of yellow and green Posty merch. Bathed in millennial pink and sombre mountainscapes, Jaden does his best to bring energy by leaping into the air and asking who’s excited for the headliner. Only the latter gets a response, and even then it’s tepid. Yes he might take it down a notch and beam “THIS IS A POEM BY JADEN SMITH” on the screens but Batman and Goku are as high energy as Tyla gave and the crowd were eating out of his palm. Jaden even says he was in hospital this morning and still made it out to the crowd and hardly anyone shows love. It feels like we’re seeing Kanye West 808’s and Heartbreaks era showing off what feels cold and unloving, but for those in the know it’s all-inclusive. Wait until he comes back with something that tops Icon and watch the kids say they saw him at Rod Laver.

As the lights go down and the cage of lights lifts, the sea of phones do the same. People have been waiting MONTHS for this shot. Instead of appearing from underneath as we all expect, Mr. Malone decides to simply burst on out from the back like he’d been simply waiting in the wings the whole time. With a lack of images on the screens and lit by basic blues and whites, Post opens with Zack and Codeine. Although unsurprisingly from stratospheric second record Beerbongs and Bentleys, the start of one of the biggest pop events of the year is marked by a strange atmosphere. But that’s exactly what Post Malone is. He’s an anomaly that’s somehow managed to straddle a vulnerable pop world, whilst simultaneously keeping the slick cool swagger of a rock star. With that hair. And that grin. We shouldn’t speak too soon though because Post has very cleverly decided to start slow and ramp up the accompanying production, knowing it’s all on himself to carry the show otherwise. Too Young and Over Now ease everyone into the set (suddenly flames appear; a sly wink to what we’ll eventually experience) and then Better Now drops. That’s all anyone needs to leap from their seats and the crowd to go into overdrive.

We bear witness to a man who’s made it to the absolute peak of stardom and still manages to seem like he’d be your go to beer pong partner.

Let’s be clear about that: they’re screaming, but the floor is motionless. Everyone is too busy making sure the camera doesn’t bump that the crowd are actually at a standstill. There’s enough room to move but everyone is glued to making sure their spot on the floor isn’t lost, lest they move an inch from Post. The saccharine lighting of Candy Paint is on full blast, giving all of us who wondered “why are we even in an arena?” the middle finger that’s well deserved. But the energy that Post has now brought with a gigantic pyro blast on cue, flames and giant clones on the screens behind somehow isn’t translating to the sea of people in front of him. 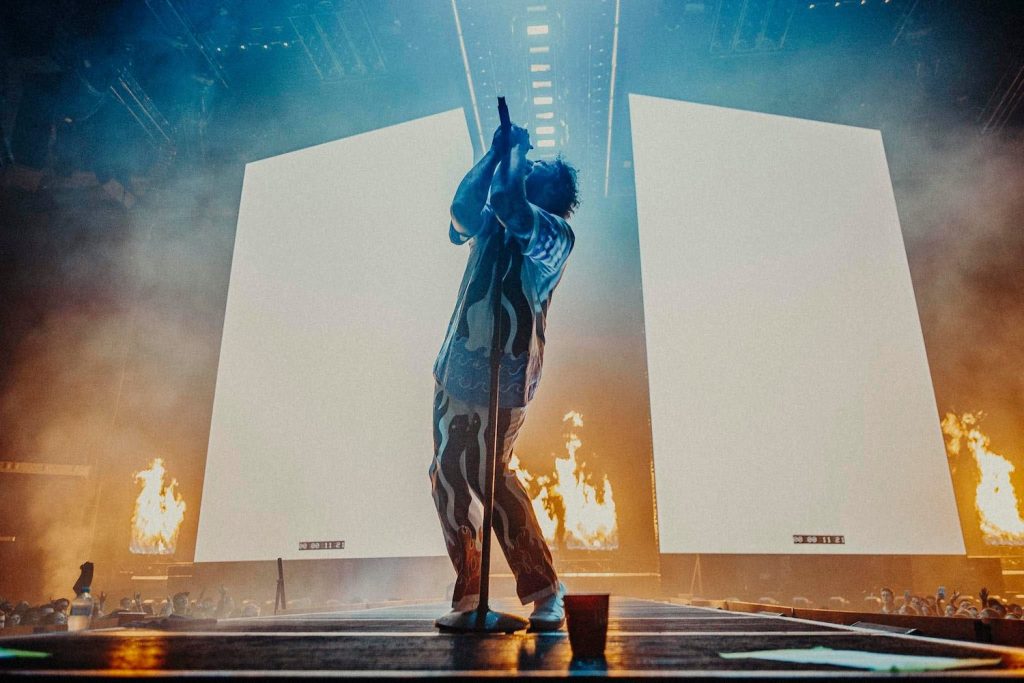 Touching on the mention of the other rockstar/rapper icon, Post Malone has clearly taken cues from the Yeezus era tour with an almost identical stage layout. Where Mr. West had his entire body tower over the crowd on the gigantic screens like the God he proclaimed to be, Post has the cameraman zoom in uncomfortably close. The infamous script “ALWAYS TIRED” and “STAY AWAY” tattooed on his face meld with the heavy bags around his eyes that fill the screen. The vulnerability of having his portrait slightly blurred, woozy like the beats that melt around the arena, is deliberate by Post. He’s a baller, but isn’t above admitting his ex’s new beau is a pretty cool guy. Enough talent to sit nakedly with an acoustic guitar and Stay, to almost sounding like tears are falling in I Fall Apart. Then to suddenly decide to drop a Return of the Mack cover. If it sounds like a breakneck emotional rollercoaster, that’s because it is. 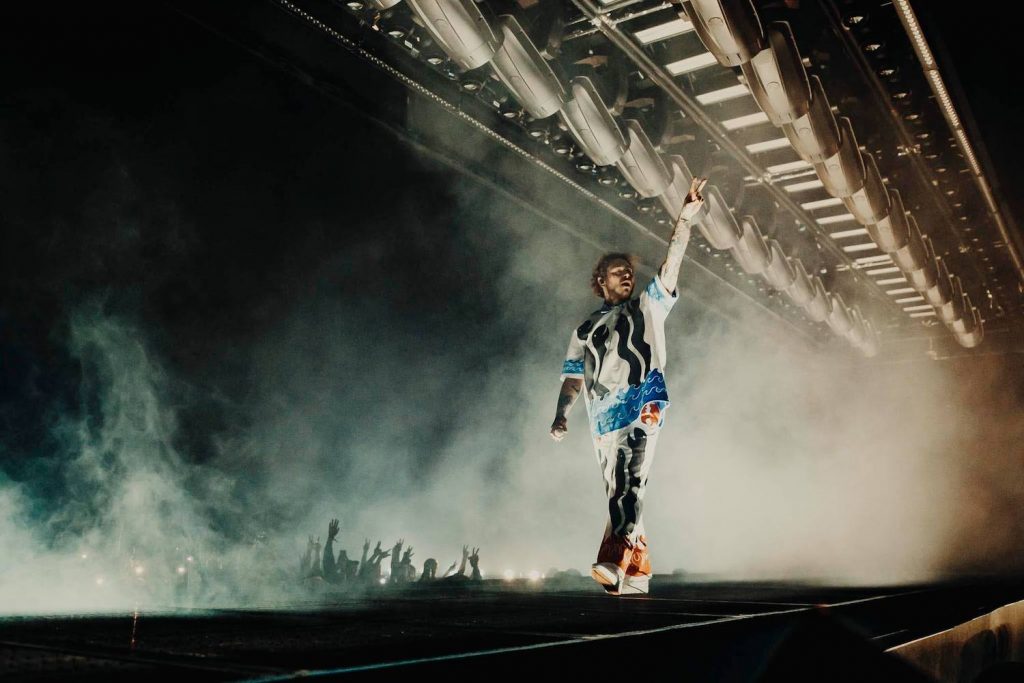 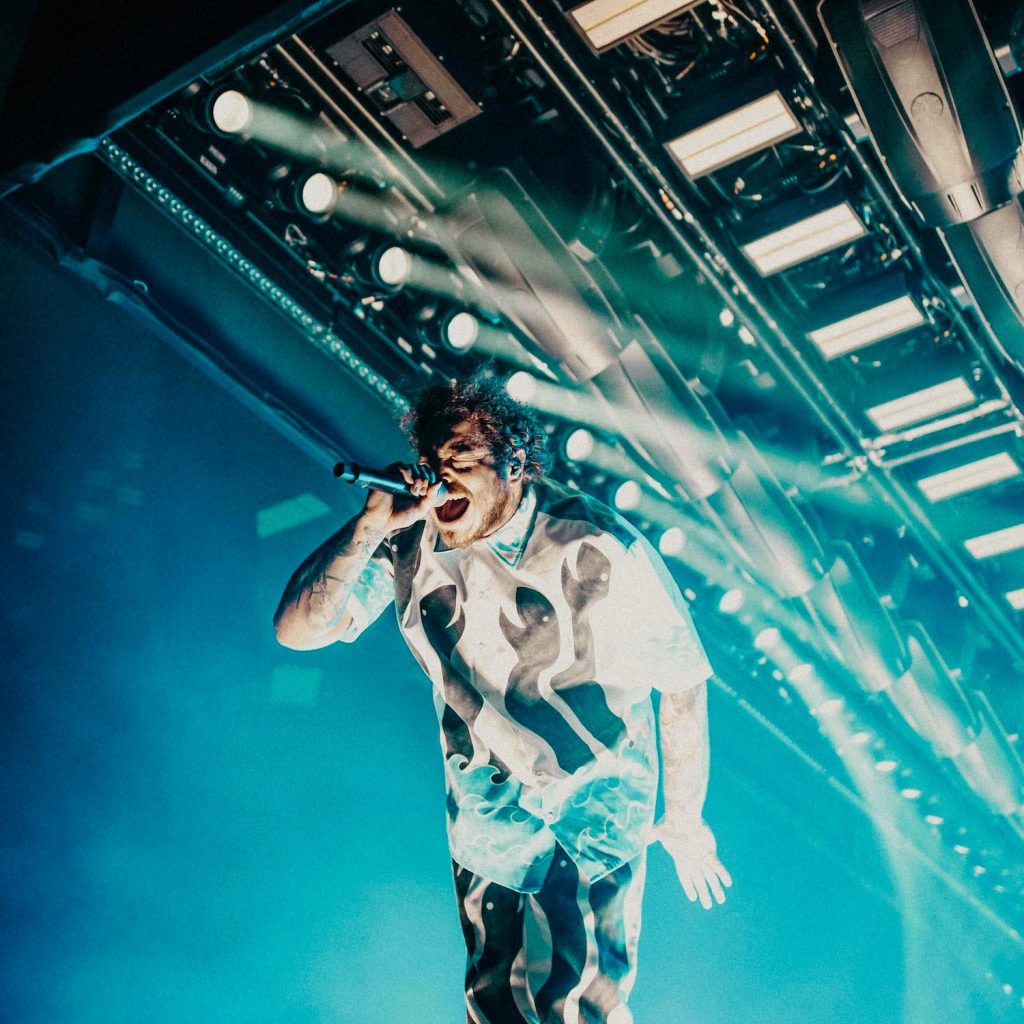 Punctuating the end of every song with a “thank you so fucken much ladies and gentleman” like it’s a tic, we bear witness to a man who’s made it to the absolute peak of stardom and still manages to seem like he’d be your go to beer pong partner. The sheer joy he clearly has in dropping Sunflower is palpable. The track is instant dopamine after the legacy speech of White Iverson that got Post to where he is today. Then the opening strains of Rockstar arrive. There’s a reason it was everywhere. There’s real guitar laced into the backing track, giving the track a sense of danger and urgency that hits the gut hard. With red and black beams as his backdrop, sparks above, pyro flying and flames roaring, this is exactly what Post is talking about. It’s the cathartic id to the super-ego of Stay. He slinks like a panther, all the confidence of a man who seized his shot, to the back of the stage. His trusty acoustic sits, the original key to his success those few years ago. “Fuck going back” he seems to say by lifting it above and smashing in one fell swoop like his idols have for years. Forget Post loves Metallica as much as he does Kendrick? The shattered body and wayward strings that he sweeps with a kick are enough of a reminder. The production itself is top notch but the man below and in front still doesn’t seem at home. 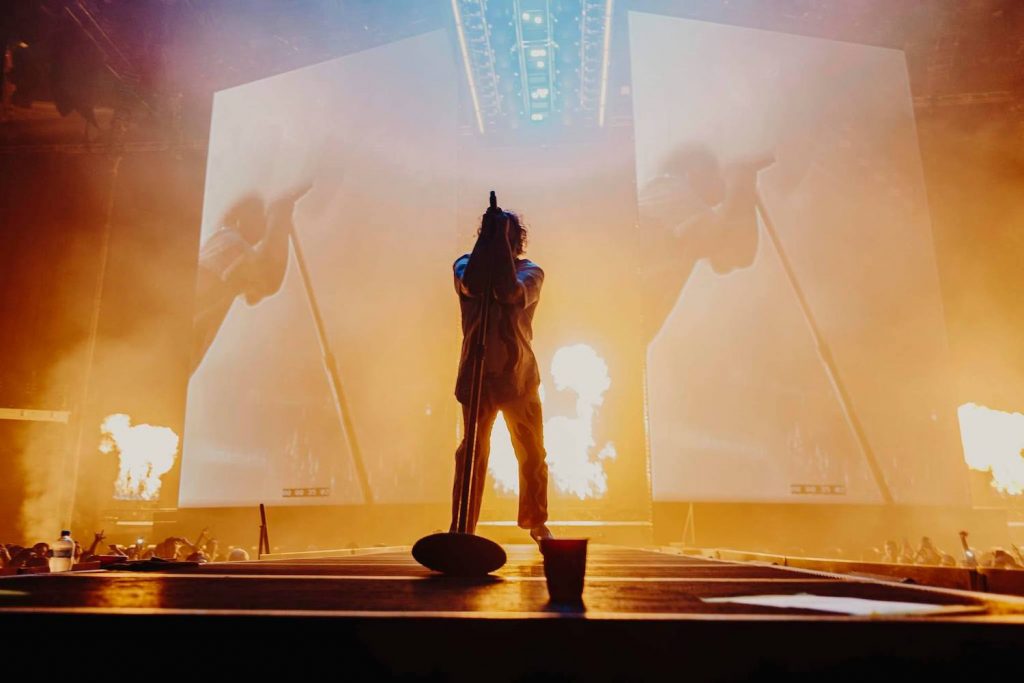 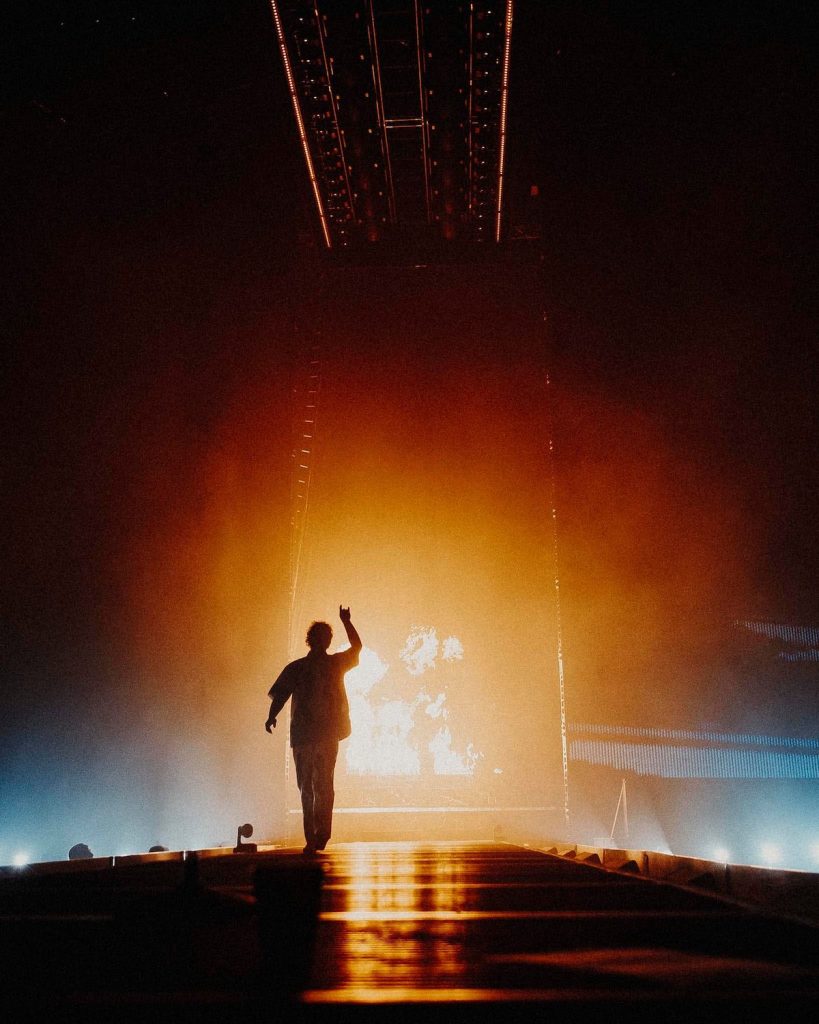 Congratulations almost feels like an afterthought, even though Post has somehow arranged fireworks to blast above him. Indoors. What the fuck has this man found himself in? Even he doesn’t know as he stares gobsmacked. No encore, just a speech about how grateful he is to have found support around the world. It’s genuine, but at the same time incredibly hollow. It’s much like his role in the cultural pantheon; beloved but also part of the churning pop juggernaut. Someone who tries to buck trends and keep them so close at the same time has to fall sometime. Post Malone has the world in a vice grip and even though it feels like he deserves to keep it that way, the emptiness that lingers feels like the thousands of images and videos beamed straight into the feed. Stories only last 24 hours; whether Post will end up with the same fate in the industry is still yet to come.