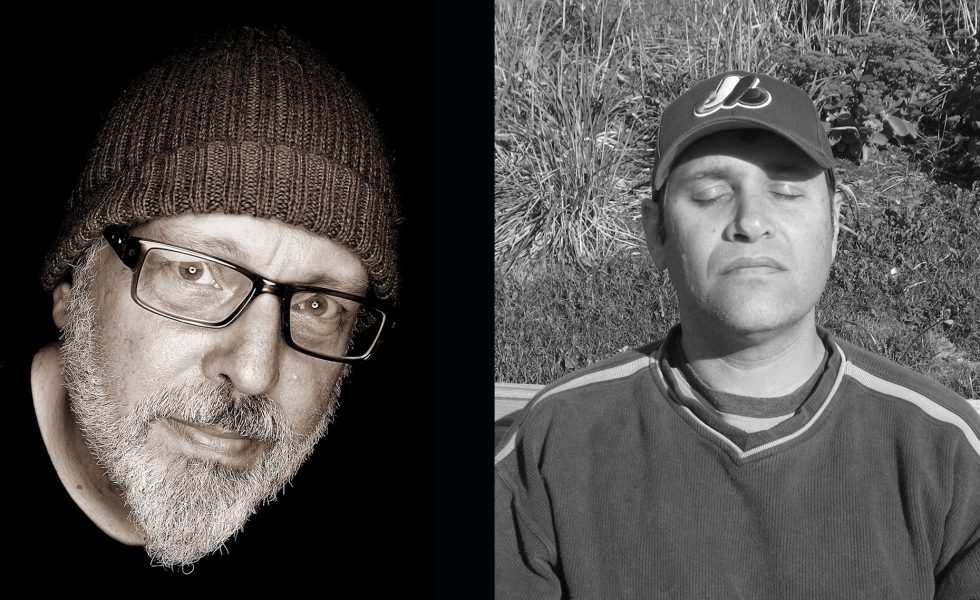 Mankind’s Final Traffic Jam. That’s not some bizarre commentary on the state of the world; it’s the name of the hot new band from legendary multi-instrumentalists Mike Keneally and Scott Schorr.

A trans-continental duo with dozens of years of road-dogging, producing, and jamming new and crazy sounds into our ears, their prog pedigree is peerless. Keneally plays everything with strings or keys on, and has done for the likes of Frank Zappa, Steve Vai, Joe Satriani, Devin Townsend, and XTC. He’s also one of the real-live players behind the cartoon death metal band Dethklok. Melbourne’s own Scott Schorr has made a career as a producer, engineer, songwriter, and instrumentalist. Founder of Lazy Bones Recordings, he’s produced Jordan Rudess (Dream Theater), played with Tony Levin (King Crimson), and even delved into hip-hop by collaborating with Turntable Bay. There’s nothing this pair can’t do with a stringed instrument and a bit of ingenuity, so they melded together to produce a “phat, debut album of instrumental prog soup flavoured with art-rock, hip-hop, hard rock and psychedelia.” We couldn’t have said it any better ourselves. What makes them tick? We got the low-down from Scott:

The album moves from Steve Vai style guitar virtuoso rock to trip-hop and slow jams – that’s all in the first three tracks. How was “having no rules” integral to getting the sounds you wanted?

Whenever I go into a record, whether as a producer or artist, I always want there to be no rules. It allows everyone total artistic freedom without being stuck into a specific feel or genre. But I also trust the process that a strong artist will develop or re-solidify their own sound.  So although MFTJ does have a lot of styles packed into the album (and within each song), we hope we’ve established an overall distinctive stamp on the vibe and personality of MFTJ.  I also think the relationship between Mike and I worked well because he’s a guitar and keyboard god and I have a background in hip-hop.  Combining those two factions was pretty exciting.

It’s also striking how many synth and electronic sounds are on this – how did you accomplish them? Did you play instruments through MIDI or work on a DAW?

We found sounds we both liked, printed them and then added any effects. No need to use MIDI when you find a sound you love! We both use ProTools. Mike used a Korg and gave us so many incredible riffs and leads to work with. I used my Fatar plugged into, believe or not, my Roland JV-1080. Old school, man!

You and Mike are both accomplished multi-musicians, how do you both divide the songwriting up? Or is there more of a jam orientation?

Well, Mike is a far more accomplished musician than I am, for sure. This is how the album came together: I had all the drum parts and some bass lines and/or piano parts written. I sent them to Mike and he would play a bunch of freestyle guitar parts, bass, piano and keyboards.  Whatever he felt the song needed. I would then go through his tracks and pick what I found were the most exciting parts and move them around wherever I thought they fit. Again, he gave us so many incredible parts to select from it was like a goldmine.  I would then loop them in different sections if needed. I then sent them back to Mike and he did overdubs. We were both bummed that we couldn’t be in the studio together but as I’m in Melbourne and he’s in San Diego, it was the most prudent way to work.

I really like compact songwriting. Get to the point if you can!
[SCOTT]

Tony Levin, whom you’ve worked with many times, also does a guest appearance. I’m sure you didn’t have to twist his arm too much…

I owe so much to Tony Levin as he gave me my first break and brought me into the world of prog when I was an underground, indie band producer.  He believed in me and I’m eternally grateful for it. I idolised him as a teenager and saw him perform numerous times with King Crimson and Peter Gabriel and I had this bizarre feeling that one day I would work with him.  Never did I imagine we’d end up doing five records together and become true friends.  He’s a musical monster and incredible songwriter.

Another aspect I noticed which was odd for a prog band is the relative shortness of songs. Usually songs last forever and ever, but the longest one on this album is a shade under six minutes.

I really like compact songwriting. Get to the point if you can! Of course, if you have a song like Rush’s Xanadu, or so many other long prog masterpieces, you need many different sections to display all these great parts.  But, if you can, why not give the listener something short so they’re wanting more. With that being said, I feel like we packed a lot into each track.

Also, what’s the meaning behind Prostate 911?

I love twisted song names. I saw a commercial with this guy who seemed extremely concerned about his Prostate. I thought, “damn, bro, call 911!” There you have it.  My favourite song title that DIDN’T make the record was, “Never Bring Your Wife to Bangkok.” Mike thought that was a bit too much.

You’re connected to the world prog scene but live in Melbourne. When we think of prog in Melbourne, we tend to think of metal side of the spectrum. What are your thoughts?

You know, I’ve lived in this great country for five years and I’ve yet to have the time to get into the prog scene in Melbourne.  I’ve just been too busy with bands from the States. I would love to find a killer band or artist of any genre to work with when I have the time. Just as long as they are the total opposite of Justin Bieber!

Was it a different experience producing and writing your own material? Or does that make it easier?

There’s really not much of a difference.  With Lazy Bones Recordings, we always produce artist’s albums from the ground up so I’m there from the start. I try to put myself in the artist’s shoes to understand where they’re coming from and what they’re trying to achieve. Although when I write solo stuff, I don’t have to compromise with anyone!

I usually ask when you’re touring here, but that seems like an impossibility at the moment. Do you hope to play some shows in the near future?

With Mike’s hectic touring schedule, I think this will just be a studio band.

That said, what was some of Mike’s experiences touring with Devin Townsend on his “solo” effort for Empath?

I know he had a blast and that he found Devin’s stuff super challenging to play. They were all devastated that like most every tour at the moment, it had to be cut short. Mike also co-produced Empath so he and Devin are pretty tight. Such a great album and I can imagine how stoked Devin was to have Mike involved.