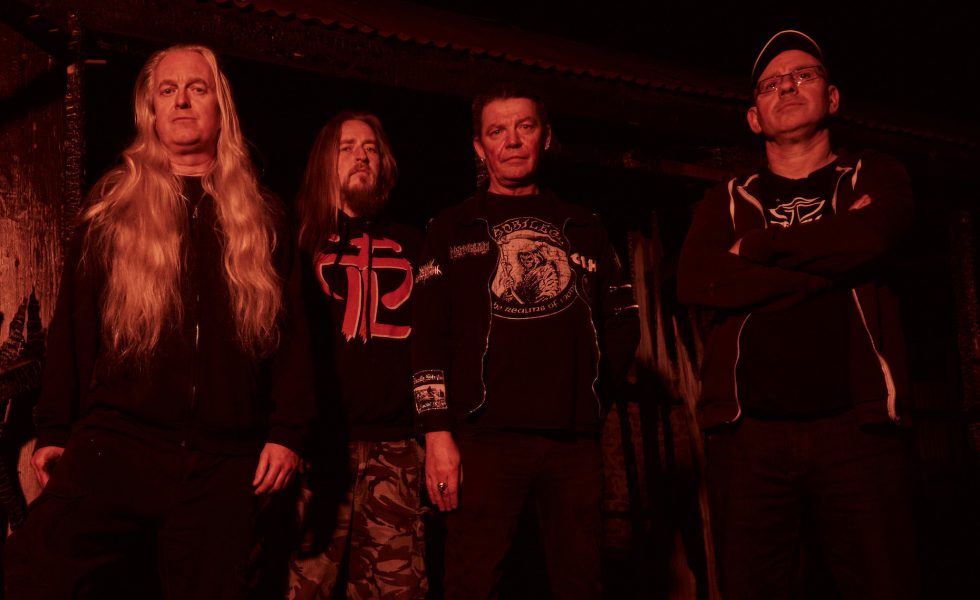 War, death, and destruction: the hallmarks of a true death metal force. British death metal band Memoriam stormed onto the scene in 2016.

Assembled from longstanding friendships between members and ex-members of Bolt Thrower and Benediction, their commitment to tough old school death metal has manifested in two resoundingly well-received albums and soon to be three, as Memoriam prepare to unleash Requiem For Mankind.

Requiem For Mankind is Memoriam’s third album in three years, which is a pretty impressive level of productivity. “Yes absolutely,” laughs vocalist Karl Willetts, “We are moving at a voracious pace and three albums in three years, quite an achievement really, I’m quite pleased and quite proud of how it’s gone, its been quite an exciting little journey for the last three years.”

“When we first started out … we just went out to have a bit of fun, you know, that’s the whole premise of why the band got together in the first place, to create a bit of joy after having some ups and downs. We just wanted to have some fun with some old friends.”

The new album is, however, hardly light-hearted, as Willetts openly explains, “There is a serious element to what we do. The third album, Requiem For Mankind, kind of completes at trilogy, the idea of three albums kind of flowed from the experience of losing Martin [Kearns, 1977-2015], the drummer from Bolt Thrower. The band was born from that, the experience of grief and sorrow. So we kind of explored those themes on the past albums. The first one, For The Fallen, was the initial phase of that. Artistically, the first album cover features the funeral procession, the initial phase of the mourning process, which leads to the second album The Silent Vigil, which is more the ‘laying in state’, the tribute, the solemn kind of respect to the fallen, and this one, Requiem For Mankind, is really the final part of that trilogy, where the body is taken to the earth, the burial process. So it kind of visually explores that, and in many respects the lyrics reflect the different ways things have changed in the way we feel about things, over the past three years, which is a relatively short space of time but things move fast and things change.”

There is a statement about the world that we live in, be it socially, politically, economically, environmentally. It does seem that the world we are living in is very … at tipping point.
[ Karl Willetts ]

Requiem For Mankind’s opening track, Shell Shock, does paint an unnervingly desolate picture, but then the album moves into some quite empowering, even defiant, songs. “Yes, I’m glad you noticed that,” Willetts states, picking up precisely where this discussion is heading, “Absolutely. There is a statement about the world that we live in, be it socially, politically, economically, environmentally. It does seem that the world we are living in is very … at tipping point. There are several themes lyrically that I tend to write about. Of course, the thematic subject of war, which is something I’ve written about for the last thirty odd years, and is something I will always write about, from that perspective that I write, not from the blood, guts, and honour and you know, glory side of things but the actual reality of it, the psychological aspect of it. So there’s a few songs on the new album, Shell Shock is pretty much straightforward, does what it says on the can, it’s about shell shock and the First World War. The last closing track Fixed Bayonets, can’t get more in your face song about the brutality of hand-to-hand combat, got a good groove to it. Of course there’s a song called The Veteran, which obviously has a military title to it, but it’s a song about, really, homelessness, the amount of ex-servicemen that become homeless … so that song is kind of about that, its was hard to write it from a perspective that wasn’t patronising, that had some sincerity to it, but yeah I’m really pleased with that song on the album in particular. It’s got almost a Pantera-type groove to it as well which is a bit different to what we write normally, so yeah I’m pretty proud of that one. Yesterday I saw the final cut of a video we’ve put together for it, and the video was put together by an ex-military serviceman … It’s a really personal kind of video, which will be released towards the end of this month. So I’m really proud of that and looking forward to seeing what kind of reception it gets from the general public. It’s a very personal take on that song from someone who has experienced it. So that’s theme number one, the military aspect.”

I’m talking directly about the rise of rampant right wing ideology, that I find appalling, and quite frightening.
[ Karl Willetts ]

“But you spotted it as well”, Willetts continues to elaborate on the second theme, “Empowerment, survival, rising through adversity and becoming stronger through the experiences we all go through in life, that features quite a lot. Undefeated is an example of that, Never The Victim is a clear example. It’s drawn from personal experience, of seeing things like this happen to other people around me as well, I think its something everyone can relate to, it can be interpreted in many ways … so that is what those songs are about … empowerment.”

As for the third theme embedded in Requiem For Mankind, Willetts informs us that while the themes of death are still apparent, there is also a strong presence of politics in his lyrics. “I really haven’t been able to do that in the band’s I’ve been in,” he recounts, “It’s always been there as a subtext, open to interpretation, but with Memoriam I have the ability to write more overtly on themes in the world, on the planet, that I feel are wrong. I’m talking directly about the rise of rampant right wing ideology, that I find appalling, and quite frightening. The effects, of austerity, austerity kills, that has affected the world around us to dramatic effect, that is has on individuals, often the poorest elements of our society, the most vulnerable people who suffer the most. So I’m really enjoying that ability to convey my personal feelings and get my political soapbox and tell people how I feel about things. Any music that has any meaning has some political edge to it. The tradition in music and heritage that I come from, the whole UK anarcho-punk scene, was distinctly political in its agenda, a-political in many ways, but it was all about making statements, giving people ideas, giving strength to ideas, and spreading the idea of difference, and not accepting the norms. And I think, as a musician and an artist, it’s your place to do that. You have to do that. By ignoring that, to ignore the issues around you, you kind of bury your head in the sand. You almost become part of the problem by not addressing the issues. That’s really what music should be about. That’s what it is about. Music is politics; politics is music.”

Requiem for Mankind will be released 21 June through Nuclear Blast Records.