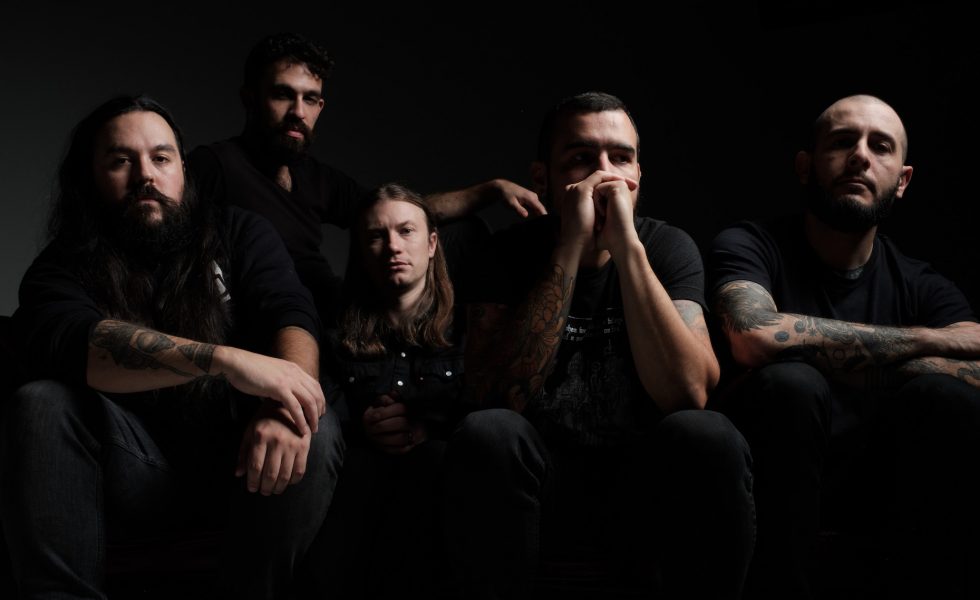 IRIST // The Oncoming Storm Is Here

If we told you there was a band that sounded like a pitch-perfect blend of Gojira, Mastodon, and Sepultura, you’d scoff. That band exists. It’s called Irist, and they’re spectacular.

Beginning humbly in 2015 in South America, the spirit of Bolivar possessed Argentinian Pablo Davila (guitar) and best friend from Chile Bruno Segovia (bass) to form Irist. Thrashers at heart, they had no greater designs on the band other than playing fast and playing loud. Moving to Atlanta, Georgia and picking up Adam Mitchell (guitar) and Jason Sokolic (drums) along the way, their demo caught the attention of semi-legendary Nuclear Blast A&R Monte Conner, signing them on the spot. Swapping in Brazilian vocalist Rodrigo Carvalho, it was time to unleash Irist on the world. Irist are one of those bullet-train fast bands that’ll dominate festivals and gigs in no time. Word will spread, eardrums will be filled, legends will be made. We talked to Rodrigo about the album so you can get to know your next favourite band just a little bit better.

Hysteria: First off, the album is a banger. It’s like you took Gojira, Mastodon, and Sepultura, dropped them into a super-collider and smashed it all together.

Rodrigo: Thanks for the kind words. Yeah, we don’t make a point to sound like anybody. It’s kind of hard, but I understand if people want to point to other bands in reference because we haven’t had anything out yet. We can’t really compare our music to say, like, a previous album. So it’s understandable that people  say we sound like a lot of bands. I think over time, eventually people will make more sense to allow the sounds to [come out] and figure out their own ideas and so on. But we feel like humbled compared to them.

The production on this album is old school. One guitar panned right, the other left, drums and vox in the middle. Is that something the band really sought after?

Yeah, so we worked with Lewis Johns at the Ranch Production House in the UK. How I don’t know, precisely if Lewis was keeping that particular vibe in mind when we decided to do those things. In general, I think, he finds great drum sounds . That’s the main reason why we’ve been working with him. He did Conjurers’ Mire album. We paid attention to the drum sound and it’s quite amazing. We decided to work with him because of that. He’s excellent in all areas and all a great friend of ours. After we finished the album, we became good friends with him. I think in general, people have been giving conflicting reception to how they think the album sounds like. Overall we are very happy with how we got it out and how the process works.

Your sound is so huge I think it needs to be experienced on big speakers. If someone listens to it through their phone…I say don’t let them.

[Laughs] I think I was talking to another, a certain friend, and he was like, ‘man, like I really like to hear this with really nice headphones because there’s so much like ear candy all around and we can only really hear those things or hear them better if you are listening to stuff like this.’ There’s a lot of details like powerful riffs. There’s big drum sounds and vocals and rhythm guitars. When you listen to it with better headphones, you can listen to all the little details. We went through so many details, so many tones for each song like that. That shows you that now as far as the quality of the format of the audio, I don’t know how impactful that would be. I think that is very personal, very subjective. I myself like to listen streaming actually. I don’t know it seems like it’s a compressed a little bit differently. I mean some people want the vinyl. I think it’s very, very personal.

I hope that when people listen to this, it’s the same thing that we felt when we listened to the Sepultura for the first time.
[ Rodrigo Carvalho ]

The band has been around since 2015, the album has been a year in the making, and took three weeks to record. Do you think taking that extra time really improved the quality and the polish?

Yeah, I think so. I think it was really a conscious decision to sit on songs for a while to demo them out and repeat them. Put them aside for a while and then go back to it and make sure that everything slowly becomes right. We’re like one of those bands that you know, spend time working very, very hard on their songs, So yeah, to answer your question. Yes. The time that we spend in demoing everything in Adam’s studio, and figuring out parts and figuring out better ways to present them, make them sound this or that way, I think that pays off. Not only that sense, because hopefully people like it and observe the quality of it, the “shine,” of it. But also because we’re in a studio  we don’t know how a part is supposed to sound, you don’t like to make that decision on the go. We can allow for that a bit, you know, for improvising and all that but the bulk of the song I think needs to be, you know, defined before we start.

A producer has to help guide you there. You can’t just walk into a restaurant and say to the waiter “hey, get me whatever you think is good.” You need to order something first.

[Laughs] Yea, it would be great! I mean a producer is somebody who gives us cool tips and all that. Everybody in the band is like in their 30s now. Adam is a really good producer too, and can make really good sounding demos too. Lewis had us thinking very deeply about how things are going to sound and you know, he’s a great guy and a great producer.

Three of you are from Brazil, Chile, and Argentina; is there a big upswell in South American metal now?

Yeah, we especially grew up listening to Sepultura, that was definitely a reference for us.. In the early 90s, we witnessed the whole thing grow. It’s, like it’s very inspiring on, I don’t know nowadays despite the same situation because of social media and technology and how easy it is to have access. You have access so much. So many bands. It’s much easier to get the instruments, much easier to do a good quality demo at your home studio. Back in the day we didn’t have anything and everything. It sounded more polished and it’s just amazing you know. And, you know, not to say that that’s the case for us, Sepultura was a groundbreaking band. As for now, I don’t know how inspiring it is nowadays for us to be out there, but I hope it is. I hope that when people listen to this, it’s the same thing that we felt when we listened to the Sepultura for the first time.

Metal has always been about plagues, war, death, destruction. Do you think this has given us a bit more mental armour when it comes to this pandemic?

That’s a very, very good question. I don’t know. I honestly don’t know. I don’t know if it’s a good thing for this time. I don’t know. I just hope that people listen to the album and it’s something that positive in the midst of all this. I don’t necessarily see any advantage, or anything like that in terms of opportunity for the album to be released during this time. I just think that the whole thing is very unfortunate and it is something you’ll have to deal with. We just have to go through it and a wait and hope that people listen to the album the same way they did before. Try to keep things as normal as they can. I mean there’s still people going around and gathering and even those recommendations people have been ignoring. Especially when there’s fake news and all that stuff. Hanging around…maybe not a good idea, folks. We just hope to keep going as much as possible until this thing goes away and we can resume regular activity. Until then, you can enjoy the album as we used to, no matter what’s going on outside.