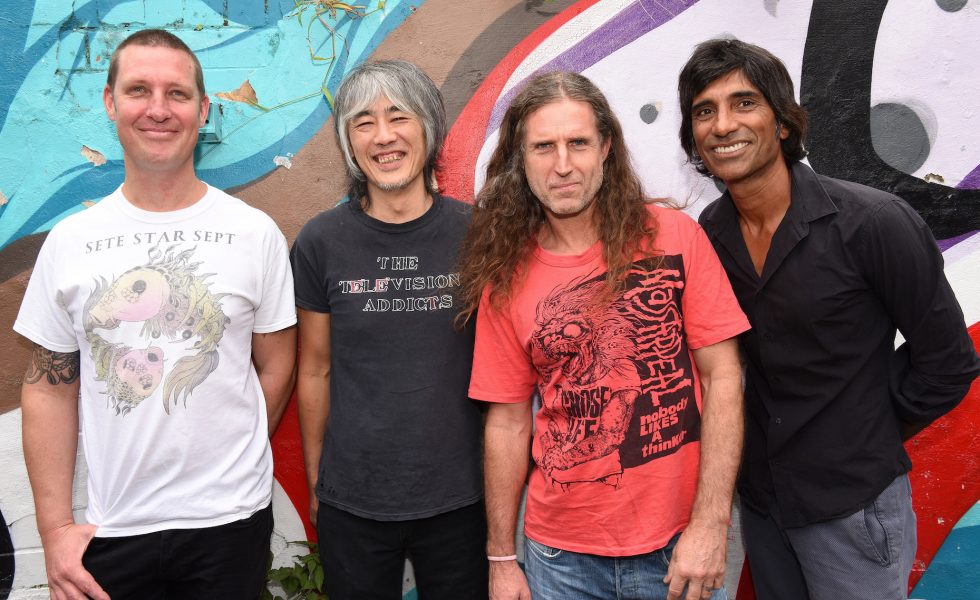 HARD ONS // Will Have Them Destroyed

Legendary Aussie punks Hard-Ons are back with a new studio album and have an Australian tour fast approaching.

MORE: HALLOWEEN HYSTERIA 2019: Throws A Hard Six With New Additions To Line-Up REVIEWS: HELLOWEEN: United Alive in Madrid // REFUSED: War Music // CITY AND COLOUR: A Pill For Loneliness // HARD-ONS: So I Could Have Them Destroyed

We caught up with the legendary Ray Ahn to talk about the new album and everything in between.

Hey Ray, let’s talk about the new album So I Could have them Destroyed. It sounds huge, was there anything you tried differently in the studio compared to past releases, production techniques, guitar sounds?

No, I think basically all the guitar sounds and everything have been much the same, it really depends on how we capture it that determines what it ends up sounding like. It’s the same sound that Blackie’s been using for the last 35 years. The final sound depends on the factors like the room, the engineer and the producer. We’re happy with the sound anyway.

Who was the producer on the record?

It was a friend of ours named Lachlan Mitchell. He has played in a lot of bands, he’s actually a pretty good musician and a very talented engineer, we’ve known him for a long time, he did an album with us back in 2010. He also did an album for me and Blackies other band Nunchukka Superfly, that’s not out yet but he did that one as well. So, he’s very familiar with our music, he knows the band well, we’ve known each other for a very long time so it was easy to work with him.

How did you record, was it all one session?

We did all the drums, bass and rhythm guitar over two days, but we recorded 20 songs and 12 of them made the album. We’ve got eight songs up our sleeve for other things, maybe split records and maybe an EP later.  We recorded last year in November and December.

Look, wild horses couldn’t keep Blackie away from taking his shirt off, he just loves doing that.
[RAY]

It’s been a bit of a long process with getting the record out.

Yeah, we did the record and then we went on tour in May with Rose Tattoo, obviously it was a reasonably long tour it went for a couple of months.

How was that tour with Rose Tattoo. Did you guys win over new fans, how was it received?

We definitely won some new fans because the whole idea of playing in a band, unless you don’t care about that kind of stuff, is to play to audiences that you haven’t played to before. So we thought it was a good idea. We’d play with anybody who would offer us a chance to play in front of new people, we can’t just do the same thing repeatedly and play with bands that are so similar that you’re not going to preach to anyone new.

I think every now and then I think it’s important for a band to play to a completely different crowd. But in our case, there was a lot of Hard-Ons fans who were Rose Tattoo fans and vice versa, in fact a lot. Because we’re all Australians and there are two Australian bands on the bill, so it ended up being quite good.

In terms of the album, was there any particular sound you were going for or was it just the songs you had kicking around at the time?

I think the Hard-Ons have always had different types of songs, when we play live our set is only like 45 minutes long or whatever. The 20 songs we play in that set you know, they’re very different in a lot of ways but to me a power pop Hard-Ons song has just as much power as a thrash metal Hard-Ons song. I think we play our stuff with 100% conviction, but on the album there is a lot of power pop stuff, you’re right, but then again one song after it’s complete double kick thrash metal, we think they fit well together, we think its seamless.

Absolutely, the power-pop side of the Hard-Ons is awesome. Were you trying to make a record with a certain sound this time around rather than just a pop record or just a thrash-based record?

Yes we definitely wanted it to be a balanced Hard-Ons album because in the past we’ve put out albums where it’s all just been one style, we put out one album that was just mainly thrash and then we put out another album that was mainly power pop and we wanted this album to be, you know, you’ve got six songs on each side of the LP, you’ve got 12 songs so we wanted it to be more a cross-section of what the Hard-Ons do.

We figured that Keish came back in the band and his strength has always been pretty good melodic singing so we wanted to highlight that by throwing in a few songs that were not just complete open chested, you know, long hair thrash metal that we sometimes do. With Keish in the band we get pushed towards the melodic stuff more.

So, the record is coming out on vinyl. Is there anything special fans can expect picking up the vinyl as opposed to the digital release?

There is tons of artwork. The whole idea was that we were going to recreate the ethos of our first full-length album which was called Dickcheese, so it’s the cut and paste technique of photographs, that’s what we did on that album back in 1988 when it was released. So that was released 31 years ago, So I Could Have Them Destroyed has a similar style of artwork, but this time the front cover was done by a world-famous painter named RockinJellybean, he’s based out of Japan and he’s like a really fabled painter.

I can’t give it away but there will be some absolute major shocks in the set where everyone’s going to really enjoy it. I can tell you it’s going to be a major surprise.
[ RAY ]

He’s considered one of the top comic book artists in the world, but he’s not interested in drawing comic books he does big bold statements on t shirts, on the side of cars and on canvas. He plays bass in the band Jackie and the Cedrics which is a band that we played with many times before and those guys are Hard-Ons fans, so we got to know them through our music. We still haven’t paid him by the way, he said it was an honour working with the Hard-Ons and we thought, isn’t that lucky there’s this world-famous painter he thinks he’s getting a good deal working for us, how good is that?

You’re going on tour in November and December. What’s the plan, is it just going to be shirts off madness that people expect from the Hard-Ons, what have you got in store?

Look, wild horses couldn’t keep Blackie away from taking his shirt off, he just loves doing that. I think we’re going to play the album, right, so obviously we’re going to play the album there’s some surprises, they’ll be some surprises that will blow some old fans away. I can’t give it away but there will be some absolute major shocks in the set where everyone’s going to really enjoy it. I can tell you it’s going to be a major surprise.

In terms of Australian guitar music there seems to be a bit of a resurgence right now with bands like Amyl & The Sniffers, The Chats, it seems like that older punk stuff is coming back. You’ve been around the scene for a while, do you think guitar-based music is having a resurgence or am I getting ahead of myself?

I met those guys from The Chats and we played with them and I thought they were fantastic and I was like ‘wow, these guys are really popular.’ I look at their Facebook and they’re absolutely killing it in Europe, and you think, that’s incredible. It’s not just them, bands like Clowns and there’s a band in Sydney called C.O.F.F.I.N and they went to America and did really well. There’s a whole bunch of young bands that are just going and doing stuff and if they are popular its going to benefit all the bands that are going to come after them as well.

If there’s interest that bands like Amyl & The Sniffers and The Chats are creating in dirty guitar-based music, then it’s going to benefit everyone and that includes The Hard-Ons and that includes the Cosmic Psychos and The Meanies.
[ RAY ]

Do you think rock and roll is in a stronger place in Australia right now?

I think Australia’s always had a really, deep rich history of powerful rock and roll music and at some point’s powerful punk music. There’s always been a rich history, sometimes people aren’t taking much notice of it and other times everyone seems to be wanting a piece of it, right now it’s the latter and this is going to benefit everyone.

If there’s interest that bands like Amyl & The Sniffers and The Chats are creating in dirty guitar-based music, then it’s going to benefit everyone and that includes The Hard-Ons and that includes the Cosmic Psychos and The Meanies. So, it benefits everybody and then the people who are going to benefit the most are going to be young people in the audience, they’ll go and watch one of these bands and decide to form their own band, It’s fantastic at the moment.

Right on.  So, you guys have been at it a long time now, you said things have changed a little bit in terms of the way you approach shows and festivals and things. What keeps you going and what’s the legacy you want to create?

Well, it’s certainly not money. Very often you end up in debt when you go on a tour but it’s–well it’s our band it’s a band that we’ve had since High School so obviously we’re really attached to it, we formed the band when we were 15, it’s like our little baby. We enjoy the music a lot, when we go on tour and come back it always feels really good because although we’re not playing in front of thousands of people a night, we’re playing in front of a couple of hundred people. They’re not massive crowds but still they’re big enough and they show you enough appreciation that you just go, “People like our band.” It’s very flattering you know, it’s very touching.

If you listen to our records they don’t all sound the same, we’ve got this core following of people who kind of like everything that we do and I think we’re really lucky that a lot of people have taken to us, you know, they can relate to us personally and through our music. So, we’re lucky that these people come to our shows when we play so we’re just really lucky. We’re happy, we’re happy to play.

Purchase the Hard-Ons new album So I Could Have Them Destroyed here.

Catch the Hard-Ons at the following dates: