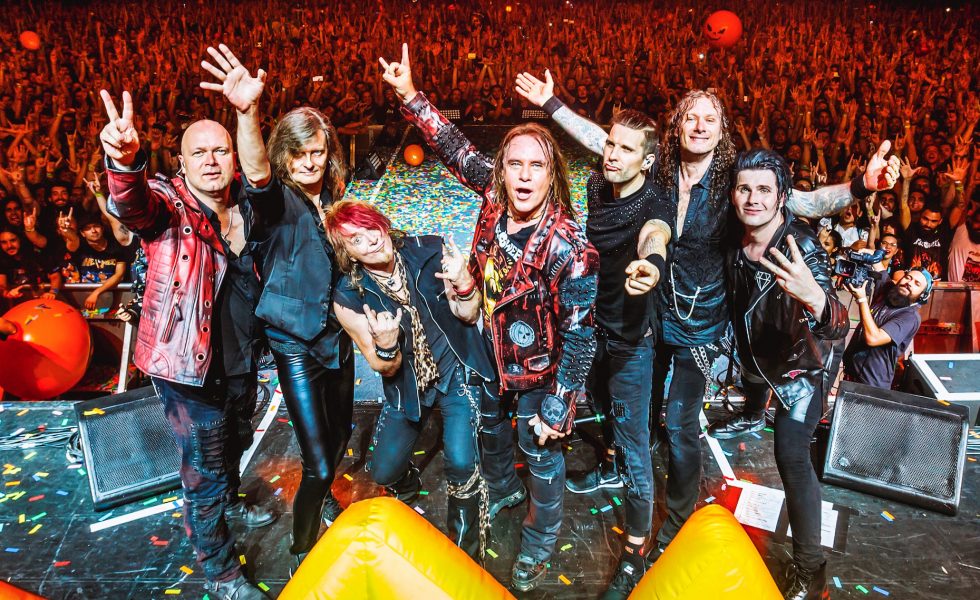 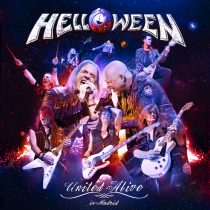 Since 1984 German power/speed metal purveyors of sin Helloween have been decimating crowds and eardrums the world over.

Through the course of seventeen albums, the band has redefined a genre, almost single-handedly transforming a style of music once feared into global acceptance that has paved the way for many to follow in their footsteps.

After numerous line-up changes throughout their tenure, the original band—Andi Deris, Michael Kiske, Kai Hansen, Michael Weikath, Sasha Gerstner, Markus Grosskopf and Daniel Loeble—reformed in 2017 for the Pumpkin United World Tour , a fourteen-month extravaganza that saw the band play 69 shows—including fourteen headline shows at major festivals—to more than one million people in 32 countries. To commemorate the occasion the band filmed select shows and have packaged and documented the journey with the recently released Helloween United Alive in Madrid concert series, released on DVD, Blu Ray, Vinyl and CD.

Over almost three hours of music from concerts performed in Prague, San Paolo, Wacken and Santiago De Chile, Helloween manage to capture the sound, feel, and intensity of a band still at the top of their game more than three decades into an illustrious career. Opening with the 13-minute self-titled opus, the album bursts into life from the opening note, giving the full experience of an actual concert playing out before you.

While many bands try and fail to reproduce a live performance when committing their music to disk, Helloween have managed to achieve this and more.

If I have ever been critical of live albums in the past it is that the vibe of the performance is easily lost in transition but not so here. If you close your eyes and let your imagination sweep you into the music you could almost swear you were standing in the crowd watching with your own senses. After the obligatory warm-up period where each musician limbers up and becomes one with their respective instruments Helloween kicks into gear, instantly smacking you in the face with a wall of sound that somehow manages to clearly separate each instrument, rather than become lost in the swirling noise that usually accompanies a live recording.

The guitars are crisp and precise, the drumming thunderous and clear, and the vocals perfectly harmonious against the backdrop of excessive noise that rises and falls from the assembled masses. Running through a collection of rarities and fan favourites, Helloween cover Dr. Stein, I’m Alive and If I Could Fly before teasing the crowd by asking “Are You Metal?”, to which they reply loudly and as one by putting the question straight back on the band. In an almost comical interplay of rhetorical questions between the crowd and stage the song kicks into gear and by the end leave you in no doubt as to the answer.

Helloween seem intent to prove that they are in more ways than you can imagine, with each member seemingly obliged to ram home the fact during one song—a feat they achieve without argument or reason for doubt. There are the occasional flat spots, notably Rise And Fall and Forever And One, but that is one advantage of listening from home in that you can skip such songs, however long term fans will appreciate those slower moments far more than a casual listener.

Highlights of the album include Kai’s Medley, a song that in Kiske’s words “takes you back in time to the beginning of Helloween.” Its intense thrash riffage leads way to solo’s from each band member throughout the length of the song, all of which are designed to accentuate the sound of the album rather than allow for moments of self-importance and adulation. Power showcases the interaction between band and crowd, with the sounds of the audience singing along almost drowning out the performers in a heartfelt gesture of warmth and love that does not have to be seen to be felt. Keeper of the Seven Keys is a sweepingly epic 17 minute monster of a song that showcases Helloween’s diversity within their genre. Building up before slowing down and changing direction the song moves around relentlessly but still manages to come together to encapsulate every moment of an illustrious career in one song. Album closer I Want Out is the perfect finale to the set, with the band sounding like they are having entirely too much fun to actually mean it.

Helloween’s United Live In Madrid captures all of the highs and lows rarely successful in translating a live performance to disk, sweeping you up in its intensity and precision musicianship. While many bands try and fail to reproduce a live performance when committing their music to disk, Helloween have managed to achieve this and more.

STANDOUT TRACKS: Power, Keeper of the Seven Keys, I Want Out

STICK THIS NEXT TO: Iron Maiden, Judas Priest, Megadeth