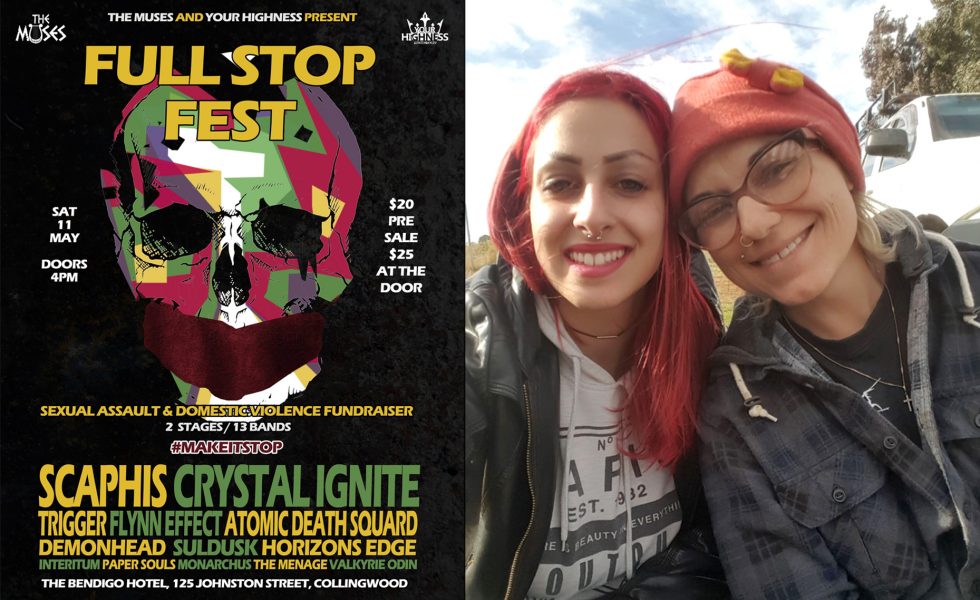 When Marianna Bougiouri, a proud survivor of sexual and domestic abuse, approached Olivia Reppas with the idea of putting on a charity music festival against sexual assault and domestic violence, planning for Full Stop Fest quickly commenced. Bryget Chrisfield catches up with the business partners who believe it’s time to unite, stop turning a blind eye and #MakeItStop.

Full Stop Fest is the brainchild of Marianna Bougiouri, who reflects on what initially inspired her to launch this charity music festival against sexual assault and domestic violence: “I was mad and angry with all the victim blaming I was seeing online, ‘What was she doing out at 1am on her own? Yeah, but what was she wearing?’ All these stories of girls losing their lives at the hands of their rapists/abusers made me gain perspective. I’m so lucky to be here today. I’m a proud survivor of sexual and domestic abuse and that immediately puts me in a position where I can do more to help my fellow survivors and raise money and awareness.”

Turning a blind eye if you see something inappropriate makes you part of the problem also.
[ Olivia Reppas ]

In order to turn her idea into reality, Bougiouri reached out to Olivia Reppas who has an extensive events background specifically within Australia’s local, heavy music scene. Reppas recalls electing to get involved was a no-brainer: “Both being strong, passionate feminists (and Greek fiery souls) who are heavily involved in the male-dominated world of heavy metal, we decided very quickly this was happening.”

She founded Brewtality festival back in 2012 and, more recently (January, 2019), Reppas launched Ballarat’s Blaze Festival with Liam Frost-Camilleri, which “clearly enforced Meredith Music Festival’s No Dickhead Policy”. “Bands reiterated it leading up to the event and on stage,” Reppas continues. “I remember Riley [Strong] from Desecrator addressing behaviour with the audience to huge applause from punters. I think promoters, venues, bands and punters have a collective responsibility to ensure safe events for all … If you see something, act; whether that be alerting security, a close friend or any staff members. Turning a blind eye if you see something inappropriate makes you part of the problem also.”

“Wouldn’t you want people to speak up if they saw your daughter, your wife, your mother, your brother or your cousin being victimised or abused/harassed in any way?” Bougiouri posits. “Speak up and speak loud as fuck. Don’t be afraid to do anything you need to do to protect yourself and the person standing next to you.”

Reppas stresses, “I do want to highlight the importance of debunking the idea that men don’t get sexually assaulted. Yes, they do … As I see it, bottom line is: we can tell when someone is being hassled; if you see it, don’t turn your head. If it looks dangerous, address it with security—don’t put yourself at risk too, if avoidable.”

Change comes through protest, not by sitting on your couch and talking about it with your girlfriends.
[ Marianna Bougiouri ]

Disturbingly, three Australian female artists—Alex The Astronaut, Marie DeVita (WAAX) and Kira Puru – all posted on social media about separate incidents of sexual harassment that they experienced at their own gigs around the country, which occurred across the same weekend in April. When asked to share her thoughts on this matter, Bougiouri confesses, “I find it hard staying calm and collected talking about these things. All I’m gonna say is that these people need to be publicly named and shamed—from the stage, on the internet, anywhere possible—and kicked out and banned from the venues. It can’t be tolerated, it can’t be brushed under the rug … This shit isn’t happening on my watch. Full stop.”

Full Stop Fest will see more than a dozen bands—including Scaphis, Trigger, Crystal Ignite, Flynn Effect, Atomic Death Squad, Demonhead and Suldusk – performing across two stages at Bendigo Hotel. In order to curate the line-up for this event, Reppas explains, “Between the two of us, we approached a list of bands we wanted representing this cause. Bands jumped on board without hesitation, donating their time and talent.” Bougiouri observes the bands they collated are “from different ‘walks of metal’”. “The response we got was overwhelming. Giving without expecting anything in return is so bonding and it brings a different kind of joy.”

“Change comes through protest,” she concludes, “not by sitting on your couch and talking about it with your girlfriends. We gotta get up and get out there and scream it at top of our lungs for the people in the back to hear, for the whole world to hear.” Although Full Stop Fest is Bougiouri’s inaugural music event, she assures, “It is not the last. This is just the beginning.”

All proceeds from Full Stop Fest will be donated to Full Stop Foundation (https://www.fullstopfoundation.org.au) 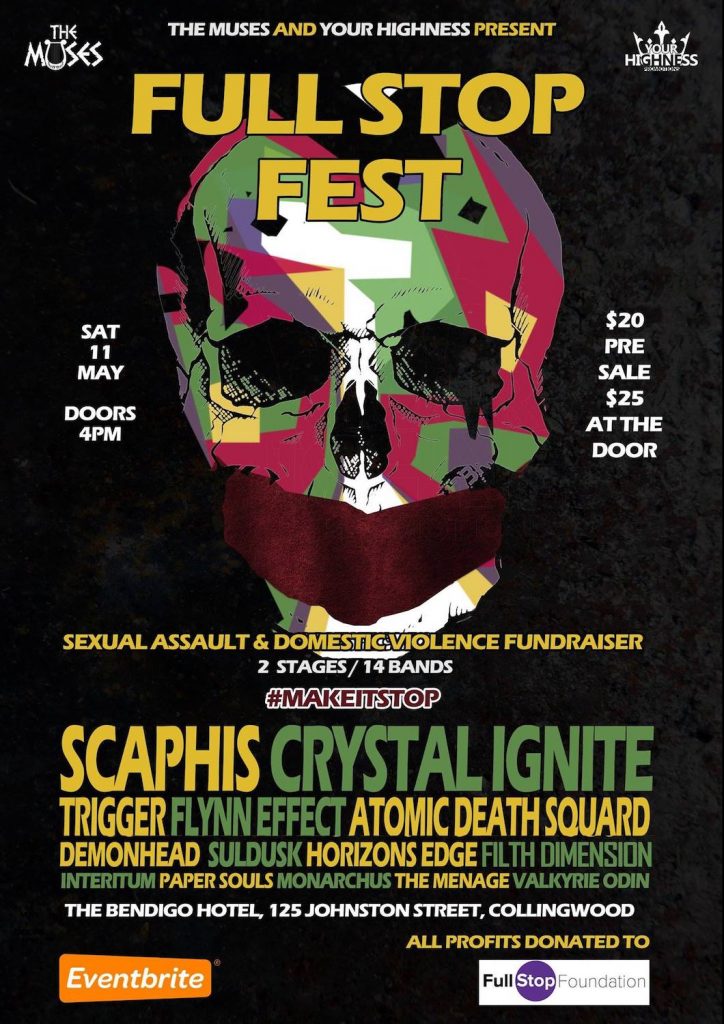