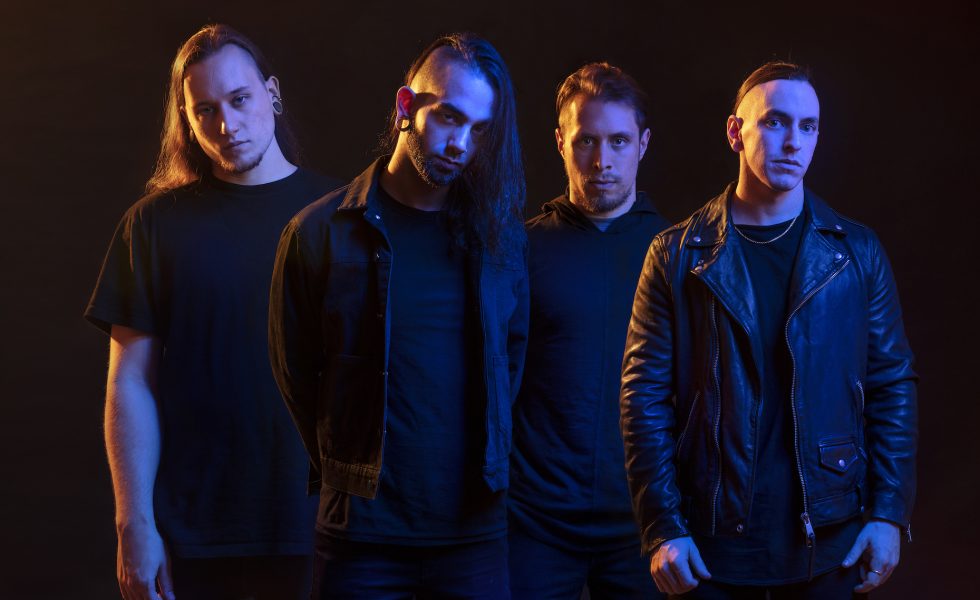 FALLUJAH // Wanna Take You On A Trip

California death metal band Fallujah—and that definition is thin on the ground—don’t make albums, they craft mind-twisting narratives like a David Lynch or Lars Von Trier high fantasy. Which is putting it mildly.

Undying Light, their fourth full length album and second for major label Nuclear Blast, is unchained by genre or convention. The shift in dynamic as their original singer departs for a new addition, namely Antonio Palermo, could have upended the unit for good. Instead, he’s a quintessence, the X-factor the band didn’t know they needed but can now never live without. Death metal, depressive black metal, atmospheric prog; Fallujah does it all. Band-leader and lead guitarist Scott Carstairs reveals crafting this behemoth was like a veteran Swiss Uhrmacher layering together an ultra-complicated automatic watch; thousands of moving parts united in one elegant whole.

Undying Light is a massive wall of sound. Just huge.

Yeah, for sure. One of the main goals we had when making this record was creating music that lends for a really large mix, something that was huge sounding and heavy on your speakers. From the chord progressions that we pick and the melodies and the kind of vibes that we wanted to get out, we wanted to just give it this general heavy vibe to it. A lot of tracks, you can hear the bass is mixed a lot differently than we have before. We’re just trying to push this very trancey, focus on the pulse of music vibe to it, immersing yourself in the music.

Is this an album that demands your attention? I can’t imagine this being on in the background at any point.

At least when I listen to my own music or listen to music, and try to make music, definitely want something that is thought out from start to finish ’cause each song is just a piece of the sound of that album. I want an album to have character, not sound like the other albums, so have a cohesive feeling and sound towards the whole record, but explore that sound in different ways from each song to song. There’s a lot of heavy songs that are kind of slow. And then there’s a lot of fast songs that have more of a traditional Fallujah song structure. But the overall idea with this was that it was gonna be a very heavy kind of sound. It’s definitely good if you’ve got some good speakers. You hear the bass. The bass is a really important part of this record.

How was working with a new vocalist, Antonio Palermo? Was he “Fallujah” material when you recruited him?

Yeah. I think so. It’s definitely one of the reasons why we chose him as a vocalist. He has a very unique voice. It brings an emotion to the table that I don’t think we’ve had before. It’s very depressive black metal. It’s, for me, the perfect compliment to the music and how emotional it is, and how huge and wall of sound it is, the way he cuts through the music, and still able to convey this sadness and pain through the music. The music’s always had a melancholy, depressive sound to it. He’s a very musical person. He’s someone who’s written his own albums. He has two albums with the band, Underling, which is just his project. It’s a one man band. Our bassist, Rob, has been involved with that a couple times. He brought something that was unique, and himself and his own character, but he was also very music about it. He understood how to take patterns and tones that helped the music breathe. He knew where his voice would sit as far as how to make the patterns and how to do his tones because sometimes, it’s better the vocals and the music to play off each other instead of the music going, and the vocals are just on top of it.

I think that lends to that immersive experience which is kind of our overall goal with our music, to have something that really sucks you in, and you’re just stuck there watching it. He’s also an amazing bassist too. So he’s on board with everything down to certain stuff around how we arranged the bass. Just someone who has a very musical ear, it just helps ’cause it’s a big project. I think it helped to get some of the best vocal performances we’ve ever gotten. It makes the album sound very whole to me. And also the fact that we only used the members that are in the band to create everything you hear. I think with this record, we really wanted to just make something that was a representation of all of us as a cohesive group by taking the sound and pushing it to the next level.

It sounds larger than that though. I can’t help but think there’s more moving parts on this record than there actually are. It’s like a duck – serene on the surface, yet paddling furiously beneath the water.

Yeah. I think the way we write music is very progression based. There’s a part of the process where we try to figure out what progressions and what vibes, and what moods we wanna put out. That’s first and foremost. So I’ll either jam out until I get a mood going, and I’ll record that and continually do it. Then what I’ll do is I’ll take those vibes and those jams, and rhythmically piece together parts and structures. Before I do all the parts, I like to have all the progressions I wanna use for the song, so that way the song have its own feeling. And then when I write other song, I’m using a different set of vibes and moods. That way you can, rhythmically … With a motifs and what you do with the riffs and the concepts, that can fit to that overall album goal. But the progressions, they could be their own vibes. It kind of gives soul to each song of the album. So it’s always about how the song makes you feel rather than maybe, “This song has this kind of stuff in it.” If that makes sense.

[Antonio’s voice] I think lends to that immersive experience which is kind of our overall goal with our music, to have something that really sucks you in, and you’re just stuck there watching it.
[CHRIS]

The same thing goes with the lyrics too. We try to write the lyrics to that song and to those vibes, and what that makes you feel. That way, everything has this very an overarching theme to it, so that way it can all fit together.

What amount of time goes into experimenting with tones and textures? How hard is it to get what’s in your head out into the world?

We just use our instincts when it comes to choosing the tones. Obviously, there’s an idea with how we wanna do the drums, and how we wanna do the bass and guitars, and how we want those to sit in the mix. But when it comes to figuring out what effects we wanna use and how we wanna arrange the music, we just play off our instincts. That does take a lot of time, going through each part and being like, “Okay, this part we want a little more delay, and we want these very loud in the mix.” But I think for this kind of music, we have to go in there and really make sure all our levels are exactly how we want ’em, all the tones are exactly the way we think… ‘Cause each piece is one layer in this overall riff. If something’s too loud or something’s not loud enough, it won’t sound the same. I think this music would take way too long if you just meticulously went over everything. I think we just kind of play it by ear.

The artwork is also a big feature of the experience, tell us about working with Nick Keller from WETA Workshop, the Kiwi crowd who worked on Lord of the Rings.

For this record, we had plenty of time in advance, so we were able to send him the idea. He was down. We were able to send him demos. He was able to listen to music. We were able to talk about the vision for the music. He’d already listened to our music beforehand, and he’s actually done some work for other bands. He’s done work for The Black Dahlia Murder. He’s done work for Disentomb, which is actually an Australian slam band. We’ve seen him  do other people’s art, and just the fact that he could have that very hands on experience and very involved with the music and what he’s feeling. For us, that’s something we really like about working with other artists, is being able to have that play off of each other. That’s how it came together. I think he was able to create something that matches the density of the music ’cause when you look at it, it is kind of shocking. You have to look at all the little details that are going on in the centre of it, and the outer rim of it, and the colours.

Will you be returning to Australia for this album?