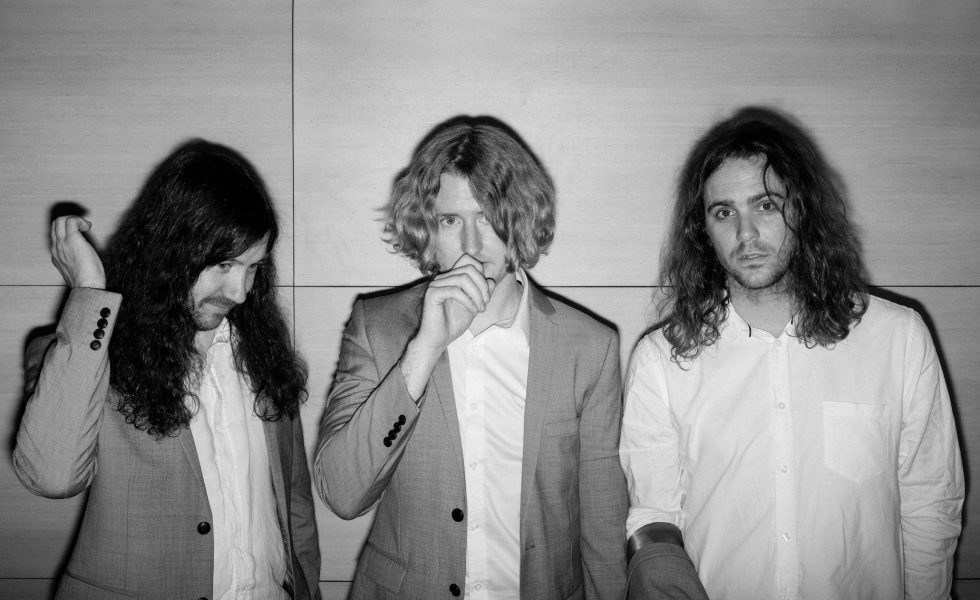 DZ DEATHRAYS // And The Winner Is …

As the faces of the Powerball campaign to find Australia’s greatest ever power ballad, DZ Deathrays put a call out to the people of the land to nominate what they thought was the greatest song of all time, only for the Brisbane dance-punk trip to then jump into the studio and cover it, DZ style.

MORE: ARTCORE: SPEEK EVIL – Portable Art Galleries For Connoisseurs Of Weird // KICK OUT THE JAMS With WAAX REVIEWS: VIOLENT SOHO: Everything Is A-OK // AUGUST BURNS RED: Guardians  // THE CHATS: High Risk Behaviour // ALL TIME LOW: Wake Up, Sunshine // ENTER SHIKARI: Nothing Is True & Everything Is Possible

Released today, The Choirboys’ Run To Paradise was the overarching winner, and it’s that song that got the DZ treatment last month. Hysteria caught up with the boys at Sydney’s Forbes Street Studios.

Only a month after they launched the Powerball campaign to discover the greatest Aussie power ballad, the ultimate anthem that brings everyone to their feet and united on the pub dance floor, DZ Deathrays find themselves in the studio recording one of the most iconic anthems to come out of Australia in the past 30 years–The Choirboys’ Run To Paradise.

Seated together in a recording studio strewn with instruments, cables, and all the other necessary paraphernalia for making music magic, the fast-paced turnaround to give this anthem some magic DZ dust was something the band says, albeit punctuated by nervous chuckles, they were prepared for. “It’s one of those songs I grew up with and everyone knows the song. It’s an Aussie rock classic,” says lead guitarist and vocalist Lachlan Ewbank. “Recording it has been pretty tough because of the vocals, because of how high it is,” he finishes, his comment met by giggles from his bandmates.

We’re staying fairly true to the melodies and the song’s structure, but we’ve pumped it a little bit.
[ Lachlan Ewbank ]

Trying as it may be to be attempting a move away from their comfort zone, DZ Deathrays adamantly agree they wouldn’t even be attempting such a feat as this if they didn’t think they would enjoy it. “We love the studio,” says Ewbank, “so if there’s ever a chance to go and record something, or do anything working in a studio, we find it really fun.

“It’s fun to challenge yourself as well, [to] make something out of a classic tune and make it our own. It’s good for our own song writing in the future, too.

“Once you pull apart songs and see how they’re put together, it does help you later in your career when you’re putting together your songs.”

And on the DZ Deathrays spin on Run To Paradise, there’s much to consider–how they interpret the work of The Choirboys, what their fans like and of course, who DZ are and how they do things. “We’re staying fairly true to the melodies and the song’s structure, but we’ve pumped it a little bit,” says Ewbank. “Shortened it,” adds guitarist Shane Parson, Ewbank agreeing, continuing, “adding some extra guitar things and changing around the vocals.

“It’s not as it is in the original song, which is nice. We wanted a more DZ version of it, especially with the guitar tones, vocal tones, and adding more psychedelic swirls and all that sort of stuff.”

DZ Deathrays have been rabid with their output to date, not judging solely by their four studio albums and three EPs, but the quality of said works, too, a particular style they’ve certified as their own. This band knows their fans well and are qualified to say whether or not those fans are interested in them doing a cover, particularly one of a beloved classic. “I reckon they’d want it heavier,” Ewbanks says, Parsons and drummer Simon Ridley muttering in agreement. “It’s got a bit of a pub singalong feel,” says Ridley of their version. “I think it had that [already] but we multiplied it by five!”

I feel like back in the day people used to be really stuck within whatever genre they liked. Nowadays everyone listens to whatever, so long as it’s good
[ Shane Parsons ]

Now is the perfect time to be reworking a song of this ilk. As DZ Deathrays can attest, there have never been as many listeners as there are now of cranked up Aussie pub rock. “Pub rock’s come back in a good way,” Ridley says, the discussion bouncing back between the three of them. “The Chats, Bad//Dreems,” Ewbanks reels off a list. “There’s never been this many listeners, or this many kinds of genres available.

“I feel like back in the day people used to be really stuck within whatever genre they liked. Nowadays everyone listens to whatever, so long as it’s good,” says Parsons. “I also feel like artists can do whatever they want now,” adds Ewbank. “There’s no real restrictions. Bands like King Gizzard have done that fairly well, like, ‘This album is gonna be a folk album, this album’s going to be full blown metal’. It always sounds like them but they’ve done things their own way, and that’s kind of how a lot of musicians are going.“We’re a rock band doing a rock song, but it’s like, this is something we wouldn’t usually do. But you have to stick to your guns of what you’re trying to pull off.”

“It was fun for us and that’s one of those things; our job is to make music, and if we get any opportunity to do that, we take it up. Why would you say no to creating something? It could all end at any moment and we’re back working our day jobs, and I’d be like ‘Damn I wish I’d taken that chance to go into the studio for a few days and covered that song,’ so we’re making the most of these opportunities.”