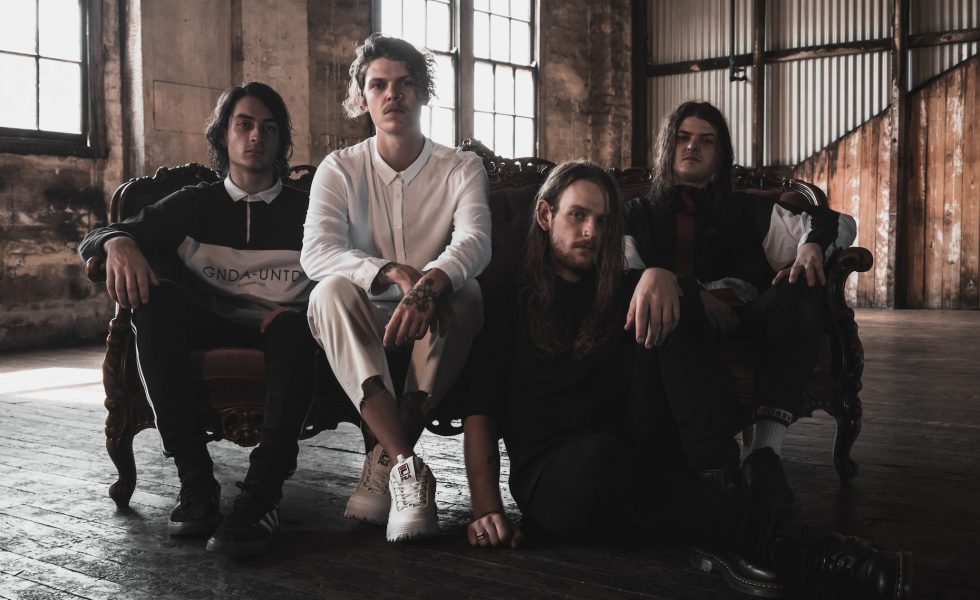 DIAMOND CONSTRUCT // Diamond In The Rough

Diamond Construct are from a town you’ve probably never heard of. It’s Taree, tucked away in New South Wales. Yeah didn’t think you had.

“There’s 24,000 people here,” says vocalist Kynan Groundwater, sitting at home with brother Braden. “Back in the day when we were growing up as 12-14 year olds our Dad would take us to the local metal shows that were happening. That sort of fizzled out and we’ve [tried to] bring it back. The closest shows or scene would be Newcastle.”

Hysteria look at Google Maps and note it’s about a two hour drive to even get there. You want to hit Sydney for a night? That’ll be three and a half hours on a good day. Although it might be presumptuous, we guess that this might make the band hungrier for any opportunity that comes their way?

“I love this question” says Kynan. “Half the drive of the band came because we were from a regional town. We look up to bands like Parkway Drive that started out in a scene that had nothing. We’ve taken that path as well. We don’t come from a capital city where everything is awash with the same genre and the same music. We were very different and we were probably pretty shit when we started. But we at least shifted and changed our sound. We’re proud of the fact we come from somewhere so small … our first show we had to almost beg people because no one wanted to take a risk on a small band from Taree they’ve never heard of. It’s so hard to get people to take you seriously but I’m proud of what we’ve done.”

We’re proud of the fact we come from somewhere so small … our first show we had to almost beg people because no one wanted to take a risk on a small band from Taree they’ve never heard of.
[ Kynan Groundwater ]

On that note, the band has a new record out halfway through the month. Their debut one at that, self-titled and all. We ask how much anticipation has built up with nerves, and how much is pure excitement. Kynan immediately answers: “0% nerves. We don’t really get nervous in this band. We’re just 100% ready to get everything out.” Braden chimes in: “I will say there are some slight nerves because you always want to be received well. But like Kynan said, we’re just really excited to get it out there because we’ve had it under wraps for such a long time.”

Hysteria note that there are clearly similarities in tracks like Hailstorm and the following Wildfire, which Kynan gives his tick of approval for. “There are quite a few things weaved in lyrically throughout the record. Like the opening track starts with Panic/Pain/And Everything In Between. People can later on, when they’re going through the album and picking apart the lyrics can go ‘oh that’s a cool little thing they’ve thrown together.’ Just as you would have breakdowns throughout the album tie things in together, we’ve done the same thing with the lyrics.”

Further adding to the explanation of how he writes from his own life experiences, Kynan re-emphasises: “Braden and I are brothers so we’ve experienced everything together.” Which is something Hysteria brings up regarding the lyrical viewpoints of the songs. Surely Braden has had his own take on some of the events that Kynan has written about, and maybe even had a completely different view in the end. Does that create some difficulties when it comes to recording? “It’s interesting you picked out Wildfire before,” answers Braden. “It’s actually about an event in my life. But Kynan writes all the lyrics and I love hearing his perspective.” “We’re really comfortable with each other,” adds Kynan, “and we’ve grown up as best friends. We’ve gone through all of the same things. It doesn’t make it harder or easier compared to other bands [being siblings], it’s just different. We don’t sit down and discuss saying ‘this song is going to be about this event’. I just go away in my own time and write the lyrics and even a little while later, he’ll say ‘is this song about that?’ So then after a few beers or something similar it’ll come out when we’re chatting. It all comes out eventually but it’s not something we’ve set out to do intentionally.”

With the penchant for bands to drop records out of nowhere, Hysteria ask if Diamond Construct had any intentions of throwing caution to the wind and releasing immediately. “At the first step of showing people, it wasn’t actually that long until Greyscale got involved with us. They had their plan on top of it and that’s why it’s been a long time since finishing it,” begins Braden. “It has been a bit frustrating,” says Kynan, “A lot of bands will tell you when they’re entering the studio and you’ll see they release it only two months afterwards or something! It always works out taking a bit longer anyway…”

So after all the pain and waiting, as well as having the pressure of coming from a small town, how does Diamond Construct view taking on the world? “It’s made us want it so much more.”