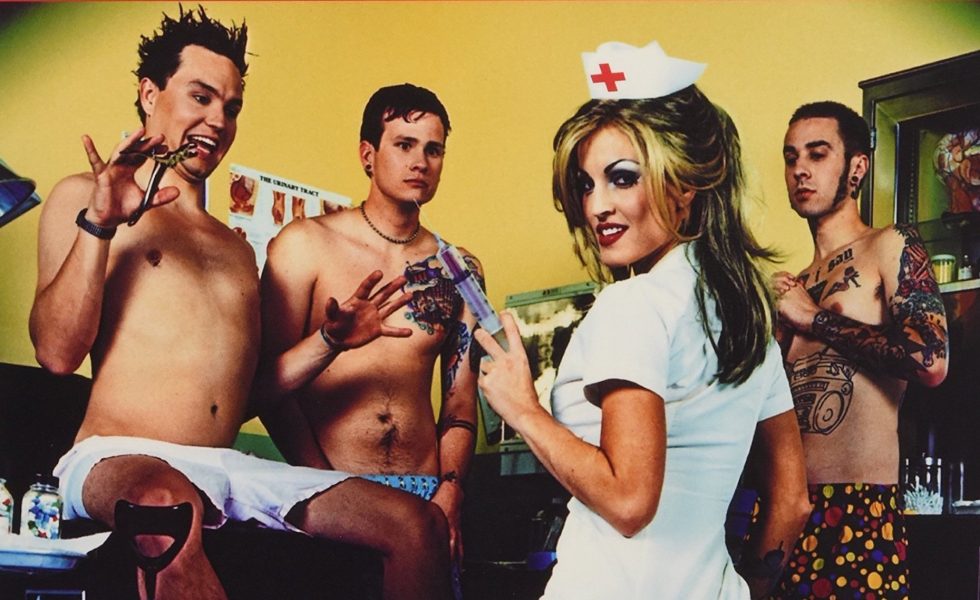 On the 1st of June this year, something will not be turning 23, but we still love it at 20.

People say it was the year of cheese even, which is understandable, but still endearing.

History lesson y’all, the band formed in 1994, Tom DeLonge on guitar and vocals, Mark Hoppus on bass and vocals and Scott Raynor on drums. After recording their first album, Cheshire Cat in 1995, the band received major buzz and signed to a major label, facing disapproval from the punk community. Their second LP Dude Ranch in 1997 was given mainstream attention with singles such as Damnit and Josie. Although facing major success, this proved to be a difficult period for the band and resulted in the firing of Raynor and the induction of ska punk drummer, Travis Barker.

Now, we get to Enema of the State, the band had a clean slate, a bigger budget and a new, accommodating producer, Jerry Finn, whose credentials included Green Day’s Dookie.

With the 12 song LP released, Enema had proven to audiences that Blink-182 were capable of a blockbuster. But people weren’t too overly forgiving of them. For you see, when a band becomes big, they’re instantly accused of the worst crime by purists; this crime is ‘selling out‘. “How dare they, they used to be cool now they’re just pop!”

Blink-182 did change a lot through a small period of time. Cheshire Cat was a raw, fast-paced, juvenile album meant for the skater punks. Dude Ranch retained that but also showed their hidden talents with pop sensibilities and their topics. Enema of the State brought everything to the forefront and more.

Yes, it sounds more poppy sure with the inclusion of more keyboards and fleshed out song structures that lean towards being radio friendly. But this is the surface level, which was easy to fall for with the amount of time the singles spent in the charts and their music videos being ever present on MTV. But with Enema, dare I say was deeper.

Break out the music shovels people!

Their sound was enhanced by the tricky and Kung Fu like drumming of Travis Barker, who incorporated his complex technique to the straight-edged DeLonge and Hoppus respective guitar and bass sound. You can easily see the difference he brought from the loud and meaty drums of Raynor.

As we started to see a little on Dude Ranch as well, DeLonge and Hoppus’ voices were driven once again more towards the melody, with more background vocals soothing their main vocals.

Entering the content of this album, you have to brace yourself for entering the mind of a teenage boy who is irritated and immature. Look at Dysentery Gary, probably one the most underrated songs of the album, it looks at jealousy as a boy mocks his ex-girlfriends new boyfriend (“He’s a player, diarrhoea giver”) and What’s My Age Again, as it tackles a youth that recognises his anti-social Peter Pan complex.

It’s relatable too, as we’ve all been to that party in which we don’t want to be at; The Party Song covers the hindrance that surrounds it and we’ve all had that Holy Grail crush that we won’t get (Wendy Clear).

Romantic problems play a big part in the album, look to Dumpweed, a song in which an immature teen explains his frustrations with women (“She’s a dove she’s a fucking nightmare”; “I need a girl that I can train”). Don’t Leave Me is a testament to a breakup and Going Away to College being about yet another breakup due to graduation. The most hopeful of all the love songs being All the Small Things is a love letter to the Ramones and DeLonge’s girlfriend and turned out to be the bands most successful single, due to its simplicity and catchiness.

Probably the most intricate song on the LP, Adams Song, wasn’t the easiest to get on the record as the band wasn’t too sure of its content. Alluding to suicide and past regret, Mark Hoppus penned a track that related to anger and sadness in an effective format. Look at the chorus for instance, “I never conquered, rarely came. Sixteen just held such better days. Days when I still felt alive …”

This showed the world of their ability, their seriousness as songwriters and they go beyond their crass image. Finally, the last song, Anthem, is a sum up of what the album is, a young boy who is trapped in the suburbs, trapped in his relationships and his own introspective obstructions.

See now after that, I would argue that selling out isn’t a crime in this case. They aimed for this high ground from minute one and look what happened. This album sold over 15 million copies and has remained a household name in the pop-punk genre. It propelled Blink-182 into the spotlight and helped influence acts such as Simple Plan and Fall Out Boy.

History shows that music trios have more space to cover, and when done well, oh boy. Just look at Rush, The Police, Muse, etc. Blink 182 is in league with these bands for successfully achieving a distinctive sound with only three people in the band.

Importantly, without Enema of the State, there definitely couldn’t have been the successful follow-ups Take off Your Pants and Jacket and the Self-titled album of 2003, in which we saw more progression of new sound and themes.

Although their initial run would only last up to 2005, we still have a memorable first era of Blink-182 to cherish. We owe a lot to the Enema album. And you’d have to admit, what an album to sell out to. This is an album that exposes the crisis of the middle-class teenager, their angst and cry.