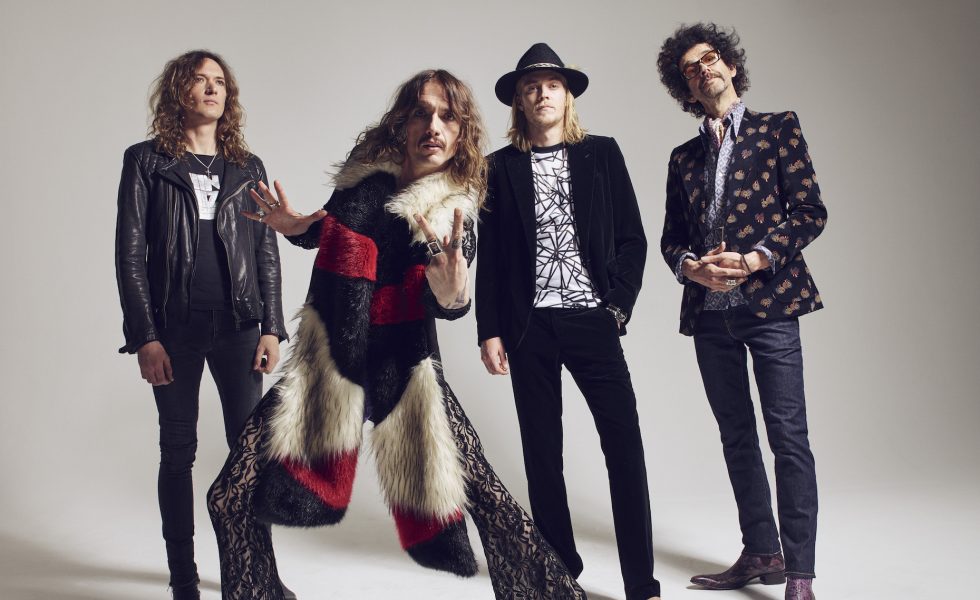 THE DARKNESS // Bring On The Sonic Apocalypse

We live in dark times and, ironically, The Darkness have arrived to bring us light.

Our salvation comes in the form of their latest album Easter is Cancelled, their most ambitious quest to date. Ahead of its release, Hysteria caught up with bassist Frankie Poullain to chat about its creation and the state of rock and roll in 2019.

Hysteria: Could you tell us a bit about the making of this new album?

Frankie: This is most time we’ve spent on an album, we wanted to create something that had a bit more warmth and was more well rounded. We also wanted to create something that had a bit of a baroque feel. Lyrically, it was inspired by many things, but the big things were breakups and turmoil in your personal life combined with questioning yourself as a rock musician in 2018/2019, a lot of the record was made last year. The record is about trying to justify your raison d’être to yourself, our track Rock and Roll Deserves To Die is about that. It’s us laying down the gauntlet to ourselves and other bands and questioning the relevance of rock and roll in today’s musical world.

People forget that Jesus was anti-establishment, he was a badass!
[ Frankie Poullain ]

What challenges do you think rock artists in 2019 are facing?

One of the biggest challenges is not giving in to cliches and not dressing the same. You know when you go to these rock bars all you see is Jack Daniels everywhere, it’s become branded. It’s all about Jack Daniels, the guys wearing crucifixes and having the same tattoos. It’s important to remember that rock is anti-establishment. That’s why our album cover is Justin [Hawkins, frontman] breaking free from the cross, refusing to be crucified. People forget that Jesus was anti-establishment, he was a badass! Just as people before him were, like the great philosopher Socrates. And after him, there are people like Che Guevara and Martin Luther King, Jr. What they all have in common is that they were assassinated because they were too much of a threat to the establishment. I’m not saying that we are on that same level and identify ourselves with those people, what I am saying is that these people should be an inspiration and a starting point for you as a rock musician.

Like I was saying before, it’s also important to remember to express yourself and be yourself. Rock and roll is a home for freaks, not conformists.

We’re in this situation now, where rock and roll feels like it’s dying, because people are worried about offending others.
[ Frankie Poullain ]

Tell us a bit about the soundscape of this album, it seems like the band experimented with every instrument possible.

We did. Dan [Hawkins, Guitar] produced the album, and he’s the man when it comes to soundscapes, he was on the mandolin. Justin played the mellotron quite a lot, we got a lot of lovely sounds out of that like voice choirs. We also created our own voice choirs for songs like Deck Chair.

Were you worried about stepping on some toes with this album?

That’s exactly the problem. We’re in this situation now, where rock and roll feels like it’s dying, because people are worried about offending others. You’ve got to stand up for self expression and what you believe in. The title of the record was actually an accident, but out of instinct we went with it and felt like it meant something. We did think that it might offend people but we didn’t do it for that, we did it because we felt like we were expressing a positive message of survival and anti-establishment.

The band was last in Australia for 2017’s Groovin the Moo Festival. Do you have any standout memories from that?

We had just gotten off a plane and we were a bit delirious backstage, it was a bit of a strange festival with a young crowd and a random mix of music but it was great. I love doing festivals where it’s all kinds of music lumped together, I much prefer those to pure rock ones.

What are you most looking forward to on this upcoming Australian run?

Surprising people, that’s what we’re most looking forward to.

Catch The Darkness at the following dates: