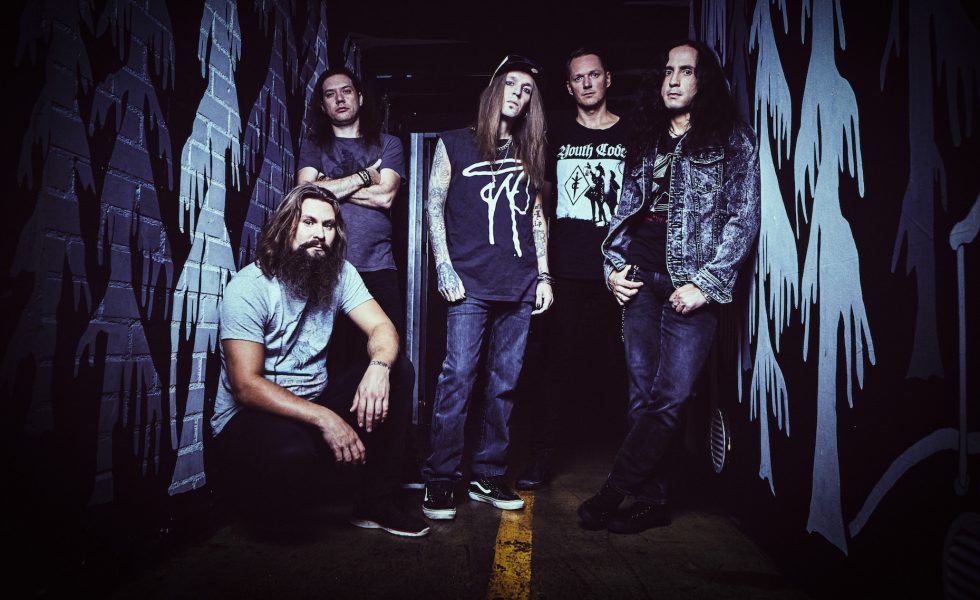 CHILDREN OF BODOM // Leading The Reaper

Children Of Bodom are kind of like the old bootleg VHS horror films you used to get at flea markets; bad graphic design, over-the-top titles slapped on the front, thin plots; but so, so awesome.

The Espoo, Finland natives have been doing the rock star thing since they were seventeen, releasing 1997’s Something Wild while dodging study and exams. In the midst of a Gothenburg explosion, the original Hate Crew carved their own path; neo-baroque power metal fused with shrieking black metal vocals, drenched in slasher and horror film themes. No one knew quite what to make of these upstarts named after a gruesome massacre (imagine an Aussie band calling themselves Children of Belangalo or Children of Snowtown) Despite metaldom’s misgivings, we knew we liked it. A lot.

Henkka T. Blacksmith, their founding bassist, is at home looking after a sick kid. “Sorry, I have to put a new TV show on,” he says. He mutters something in Finnish about Peppa Pig or something, as his kid complains. Can’t be a rock star 100% of the time, right?

Let’s discuss Hexed. Your 10th album. You’re going to run out of colours to paint the reaper very soon I’m pretty sure. Did you ever think that you would have 10 albums now, 22 years down the line?

[Laughs] No, of course no. It didn’t even cross our minds. I remember when we signed the first album deal back in ’97 and that deal was for three albums. Even that three albums felt like an eternity, felt like something we will never be able to do. It was beyond all our fantasies.

You guys brought in Daniel Freyberg for this one; how did a new guitarist shift the band dynamic?

We know the guy for some years already, so we knew that he was good and that he’s a nice dude. But of course it’s quite nervous for everybody when you actually start to practise the new songs, the new riffs. But it was also very relieving for Alexi to know that now we have a good guy who’s, able to play his own parts on the record.

So that was kind of like a relief. And then it makes also the track practising  easier when you know that you can practise everything in a way that you also track them on the record. So it’s more simple that way. So anyway, it was a relief. But of course it’s still a little bit nervous, and I think it’s more nervous of Daniel, of course.

Of course, we are four guys who have been doing this same thing for twenty years and then for the new guy… I believe it’s a little bit harder to give his opinions, like at least very straight up. But also in a situation that we did not know what to do we could go and ask Daniel, “what do you think, which way should we go?” He would be the guy to give his opinion to solve those problems better. All in all, it was a very smooth process and I think that if we ever do another album, I think it’s gonna be even better.

The new album sounds like you guys had a lot of fun in the studio, it very much reminds one of your first three albums.

I don’t think that the first two albums we were actually having a lot of fun. We were having fun, but the recording and making the songs was very, very serious. Serious business, even more serious than what it is now. I’m glad that you find some similarities to the old times, of course it’s always nice. Nice to hear, that we are not cut away from our roots. We had a nice long period of time to make these songs, in a way that felt quite relaxing, actually. Otherwise, it was pretty much the same procedure as always, there’s not really big changes.

What’s striking about Children of Bodom is that it feels like you make these songs for the big stage; some real crowd interaction moments in there. Is that what you do while writing? Think of how it’ll come across live?

No, it’s quite the opposite. We don’t usually think about the live situation at all. Only after it’s recorded, we think “how the fuck are we going to be able to play this live.” It’s more this way and not the other way around.

I think lately when you’re older, you’re wiser. You realise that how cool of job this is, and that we should be grateful for it.
[HENKKA]

As the bass player, how do your contributions fit?

I don’t write songs, Alexi writes all of the riffs actually. But we all together, we arrange the songs. Almost every song, all of us contribute on what order the riffs comes, which one is gonna be the intro. Which one is gonna be the outro. Which one is gonna chorus bridge. Of course sometimes Alexi has a very clear idea, that “I have this thing, and it’s gonna be a chorus, but I don’t know what the other riffs are gonna be.” It’s almost always like a five guy, cooperation to make the song as it turns out. The older we get, the more we work together the easier it is, at least for me to tell my opinion to the guys, and to Alexi what do I think about this part, and what part should this be in. In a way I think it’s all of us, at least I can talk on behalf of me, that I’m involved in the process more and more in every album. Still you know, Alexi riffs and Alexi melodies, we all just arrange the stuff so that the songs are how they actually are, and end up on the album.

Children of Bodom started when you were all seventeen. I was sweating over exams; I would never even imagined I’d be in a touring band, and that would be my job. What was that like for you?

I was sweating the exams as well. I was doing both.

Like I said earlier, when we got the record deal, that was kind of like the dream come true. And then it was a three album deal. So it felt like this is gonna be a long one, we’re gonna be old when we finish the third album. In a way it took us already far, and even beyond. Like I said earlier. When I was 17, when we recorder the first album I was in high school, and I had a really good teacher that is responsible of your choices for the future in a way.

Yeah, so he happened to be a metal fan, and he knew, he knew our band actually and, he was really encouraging me to go to all the shows. He also suggested that I should take my high school instead of three years I could do it in four years. So that I can be on the road.

So what’s your greatest reflection on this rock star life, looking back?

I think lately when you’re older, you’re wiser. You realise that how cool of job this is, and that we should be grateful for it. You know everyday that we can do this for a living so. So that is something that I think most of us at least, I think all of us, looking at lets say five years that we actually realised, how the fuck, this is pretty cool, what were doing so we should be, enjoying this while it lasts. Maybe at some years we took it a little bit for granted, because we you know, we started so young.

But of course there are these moments, that it’s the worst. It’s the worst profession ever when you are on Brazilian tour and there is a flight and show everyday, you have a 39°-40° degrees fever and diarrhoea, and you have to fly and you have to play a show the same day. There’s no, you cannot really call in sick, that’s probably the worst. Worst part of this business, but then again it’s quite rare that this happens. So it’s still more positive stuff than negative.

Will we see the Hate Crew in Australia again?

We haven’t engaged anything yet, but I really hope so. Seems like there’s lot of interest in Australia, so I think there might be some correlation for also some demand for shows. So I really, really hope so.