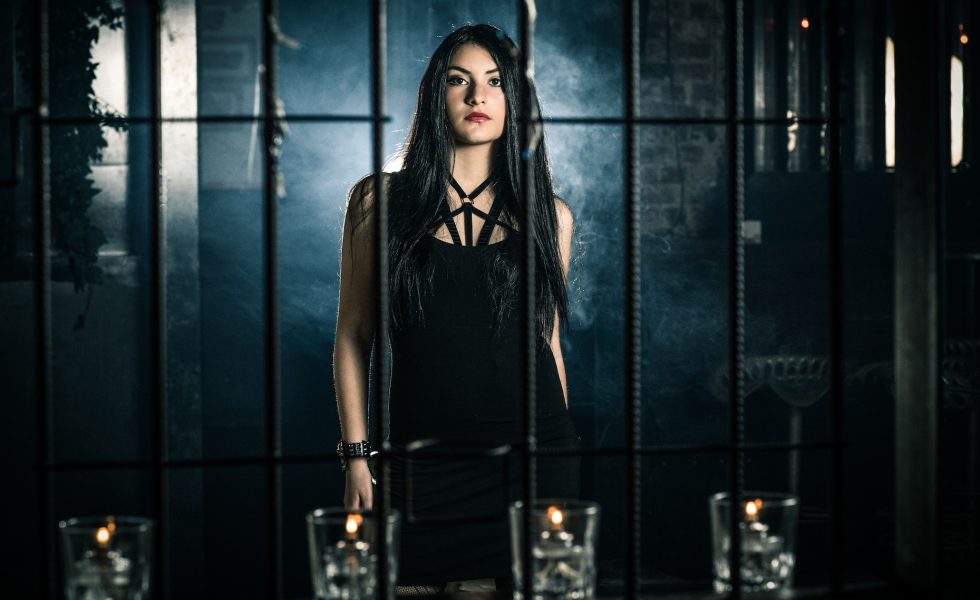 Victoria K is an emerging force in Melbourne’s gothic and symphonic metal scene. With her hauntingly powerful voice and stormy songwriting, Victoria K’s music balances at the nexus of dark fragility and empowering strength.

Victoria K has recently released a new single, enigmatically titled Lacuna, which as she explains, is a Latin word for ‘the missing space’, which she has interpreted metaphorically, “Lacuna is about the search that we go on forever, looking for the one thing that we can’t always find. So basically, the search is within ourselves, and you just have to dig deep enough to find what you are actually missing.”

Lacuna is our first glimpse of Victoria K’s forthcoming debut album, which as she describes, embraces a variety of exciting influences. “On this album”, Victoria excitedly explains, “we’ve based a lot of the songs on Lacuna, but this album … its got a lot of folk-y elements, a lot of middle eastern sounds, a lot of Celtic sounds, a lot of symphonic sounds as well, so it’s like a blend of a lot of different things. It’s going to be very interesting, the songs are coming along really well, so it’s going to be really cool.”

Victoria K has released Lacuna along with a stunning music video for the single. Filming the video was quite an adventure, as Victoria tells us the story. “Oh it was a lot of fun!” she recalls, “Gary [Robertson, of Jarrah Film], … he’s an awesome videographer, it was just really fun. We filmed it over two days. The first day, we went to the forest, and that was so fun, it was like … just … us, filming in a forest, it was really cold though. The second day we filmed in the abandoned warehouse, which was really, really cool. I thought it was awesome. We got locked in there, … but that’s ok …”

So, how did they get out? Victoria laughs, “We found a hole in the fence! So, yeah, that happened! And then we also filmed at the river and in the city. They were like super long days but it was really fun to film.”

I’d love them to enjoy the music, because that’s what it’s all about, the people and the bands.
[ Victoria K ]

The Lacuna music video is laden with powerful symbols, such as butterflies and ghostly figures. Fascinatingly, Victoria relates the significance of these: “the butterfly represents the human soul,” she explains, “so the video is supposed to be following the butterfly, like I’m following myself, I’m finding my soul. The shadowy figure, there’s one figure of a person and then a ghost-like figure next to them … the person in the black dress is actually me, when I walk out from behind a tree, I reveal that the person in the black in actually me, then at the end when I turn around to face myself, the shadowy figure disappears, like I’ve found myself. I’m not distorted from reality.”

Certainly, its powerful stuff. Lacuna is Victoria K’s second single; her debut single Monster was released in 2016. Since then, Victoria feels that she’s come a long way, and is excited by the new possibilities. “I’ve been doing a lot of vocal training over the last few years,” she recounts, “I’ve switched vocal coaches so many times since Monster, I started with classical training, and then I went to contemporary and now I’m back to classical, which I think is really awesome, I think that’s one of the best training techniques. Right now I’m doing opera, which is really really fun. It’s much, much more challenging … I get influenced by artists like Tarja Turunen, who is an opera singer. I think it’s just adding another element to my music, on the new album I’m going to be adding some of that operatic vocal into it, which I’m really, really, excited about as I haven’t performed it ever before.”

There are some strong influences from vocalists such as Tarja in Victoria K’s sound, but there are others that inspire her, as she says, “I love Nightwish, the symphonic, the composition of all the music, and how everything just kind of blends. The symphony, the orchestra stuff I love, from bands like Nightwish, the heavier stuff I get more from bands like Eluveitie, and Kamelot.”

Victoria K will indeed be supporting Swiss folk metallers Eluveitie for their show in Melbourne this month. “I know, I’m so excited!!” Victoria exclaims, as she informs us that in regards to her set, “At the show I will be performing my new album that I am recording, so all new stuff, that nobody has ever heard before, as well as Lacuna. So, I’m really excited and I’ve got a band with me as well and they’re all awesome musicians … so I think it’s going to be a really good show, I’m really excited … I just love putting material out there and performing for people. I just want them just to take the messages out of the songs. Obviously I’d love them to enjoy the music, because that’s what it’s all about, the people and the bands, I just want them to get good vibes, I guess, take on the messages, and leave feeling really good, that’s what I want, I want to make people feel good.”

Lacuna is out now distributed through Warner Music.

An Evening with Eluveitie Australian Tour 2019: