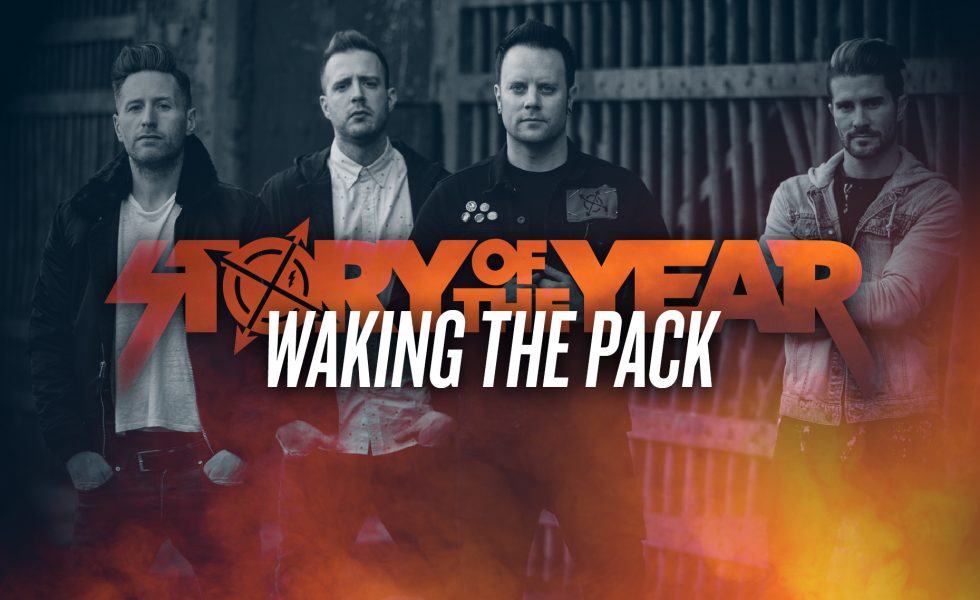 STORY OF THE YEAR // Waking the Pack

Mar 23, 2018 / WORDS Jonty Simmons / Pop punkers are back and stronger than ever

Nostalgia’s a funny thing. We’ve become so accustomed to legacy acts bringing their 10, 15 and 20 year anniversary tours over for a jaunt in the limelight that we often don’t even think of them as artists anymore. Play the old stuff goes the motto. Well Story of the Year have done that: their Page Avenue tour in 2014 saw crowds return to their emo roots and scream the favourites.

The band went on hiatus in 2010 and never showed any signs of returning, so of course any sign of them was welcome. But after a crowdfunding campaign came bolting out of the blue in 2017, Story of the Year made their “wait what?!” return. With brand new material almost a decade after they called it (kind of) quits, the Wolves tour (yes for those curious, they’re very aware of the Rise Against title clash and both bands are cool with it) is ready to hit Australia.

Guitarist Ryan Phillips isn’t gun shy about sharing why they wanted another Story of the Year album out into the wild. “I would say a significant percentage of the desire to put out another record was to travel,” he laughs. “You start to really miss it after all those years of living on a tour bus, hotels and everything else. Australia is one of our favourite places to play on the entire planet and that was one of the first things we talked about. I said to our booking agent ‘We’re not going to tour 10 months of the year like we used to, we’ll be strategic and go in and out. But mainly, when are we doing Australia?”

Having time off and experiencing totally different things in life for seven years was so inspiring. I had two kids in that process.
[ Dan Marsala ]

Drummer Josh Wills is ready to make the return as soon as possible. “Every time we get to come back and see the fantastic country is such a privilege. The fact that we have a new record we’re super psyched on and it’s the best record we’ve ever had… I know everyone says that but it’d been so long since the last record, this one felt like our first record again.”

To back this claim up, before they even attempted to take on the great United States, Story of the Year targeted Australia. The band used to tour consistently every few months and the fans knew it.

“The touring part is the hard part now,” adds singer Dan Marsala. “We aren’t going to wait another seven years to make a record we know that, but we’re going to go to as many cities as we can. The flight is rough [to Australia] but it’s all worth it.” He’s referring to the fans that have kept them in their Spotify playlists even when the band seemed like a distant memory.

Although those crowds may have grown up in their absence, Phillips isn’t worried that some fans may have moved on. “That’s just the reality of going on hiatus and disappearing for a few years,” he says. “I’m sure there will be those die hard fans who were teenagers that will come back, and some new fans too.” Marsala feels the same way, having gone through early parenthood after finding himself with two children with the band out of the picture. “Having time off and experiencing totally different things in life for seven years was so inspiring. I had two kids in that process. I hope that our fans have grown along with us and gone through the same things as us. But at the same time we want to be gaining new fans all the time. Of course we care what people think but we’ve done this one all on our terms and if we’re still going to be a band, we’re going to do it how we want.”

Phillips couldn’t be more stoked about how their trajectory has gone at this point though. “Honestly at this point in our careers we just want to have fun… it’s fucking music dude, it’s supposed to be fucking fun! We’re not gonna be millionaires, we’re not going to play the halftime arena show at the Superbowl. But we can still do what we love and travel the world; just seeing Sydney, Perth and Melbourne again is still fucking cool man!”

We’re not gonna be millionaires, we’re not going to play the halftime arena show at the Superbowl. But we can still do what we love and travel the world
[ Ryan Phillips ]

Their opportunity to return to our shores was bolstered by a hugely successful crowdfunding campaign that the band launched on a whim. With all the material written, Story of the Year figured they might as well give it a shot. “We set a pretty ambitious goal by realistic standards,” says Phillips. They figured it would take weeks (more likely months) for them to gather enough money from fans. Who funds a band on hiatus, they questioned themselves.  “We hit our goal in 24 hours,” says the guitarist in awe. “To date we’re at something like almost 400% of our goal.” Impressive doesn’t begin to cover it. Wills adds, “it was crazy and unexpected… but it was insane that it kept going! I knew that our fans were the best and they’ve stuck with us through ups and downs but I don’t think any of us thought it would turn out the way it did. Phillips pivots towards to their overall view on life at the moment: “We’re not gonna be the biggest band in the world, but there are people out there that still say their favourite band is Story of the Year and we’ve come to appreciate that on a whole other level. Betting on ourselves is really exciting to me at this point in my life.”

When Story of the Year left fans wanting back at the start of the decade, most people didn’t own a smartphone. Now it’s almost impossible to find someone walking down the street without one. A change in the mobile landscape is a huge change for Story of the Year that hasn’t gone unrecognised by Phillips. “I have more power to reach our fans in my pocket on my cellphone than the most powerful record label had 15-20 years ago,” he enthuses.

“The fact we can reach our fans directly is fucking amazing. If you’re a music consumer and pay nine bucks a month, you have access to everything. The money for an artist is nothing like it was but you have access you never had before. There are opportunities that just weren’t there before and I think it’s a glorious time to be an artist too even with the money issue.”

That money “issue” isn’t too surprising. We all know that streaming services have effectively taken away the incentive for fans to buy records that once made up the bulk of an artist’s livelihood. “I’ll be honest, in 2012, I was bitter about streaming,” says Phillips when asked about how he first viewed the change. “But the more time went on and the more I thought about it from a consumer’s point of view and the upside for connection, it’s just a beautiful time. It really outweighs the lack of money. I make a 100th of a penny if someone streams one of my songs with commission and split between my band members. If they were streamed a million times I might get a cheque for 50 bucks. Whereas 10 years ago with that million streams, if 10% of those people bought the songs, then that would be 100,000 dollars rather than 50. Which is enough for me to get gas,” he says, laughing at the absurdity. “But dude the way we can share and trade ideas, culture, and music without a label? It’s pretty magical.”

The more some things change in the industry; there are some that still feel exactly the same as they did 15 years ago. Writing a new album? That fits in the latter category. “As far as getting a record together though, that’s kind of the same,” says Marsala. It wasn’t without its issues though. According to Phillips, there was the potential for Wolves to never make it out of his bedroom. “I genuinely thought there was a 10% chance that anyone would hear it,” says the guitarist. “So I spent years writing all this music asking myself ‘wow are we ever going to be a band again? Is anyone even going to hear this shit I’m killing myself writing?’ I honestly didn’t know whether we’d get back together again. The upside to that is that the songs weren’t written for the fans, a radio programmer or anything like that.”

Marsala agrees: “If I don’t like it, then how am I going to convince other people to like it? It’s kind of a selfish thing in the hopes that people will agree with your ideas and hope they like it too. That’s always been our process.” Phillips continues, “It was just because we love making music and we had ideas that I couldn’t not write them. I wrote 50 songs and I didn’t know if anyone would ever see them. But that meant there was zero pressure.”

Maybe a hiatus is the way to go for those who’ve lost their creative funk? Some may even say for long running bands in general, it’s the best cure. Wills couldn’t agree more about the lack of expectation and how freeing it truly was. “We were so go go go for so many years but I don’t think anyone anticipated the break would go for so long. I certainly didn’t but… I think the band is better for it.”

Story Of The Year will be touring Australia this May with special guests Void Of Vision: