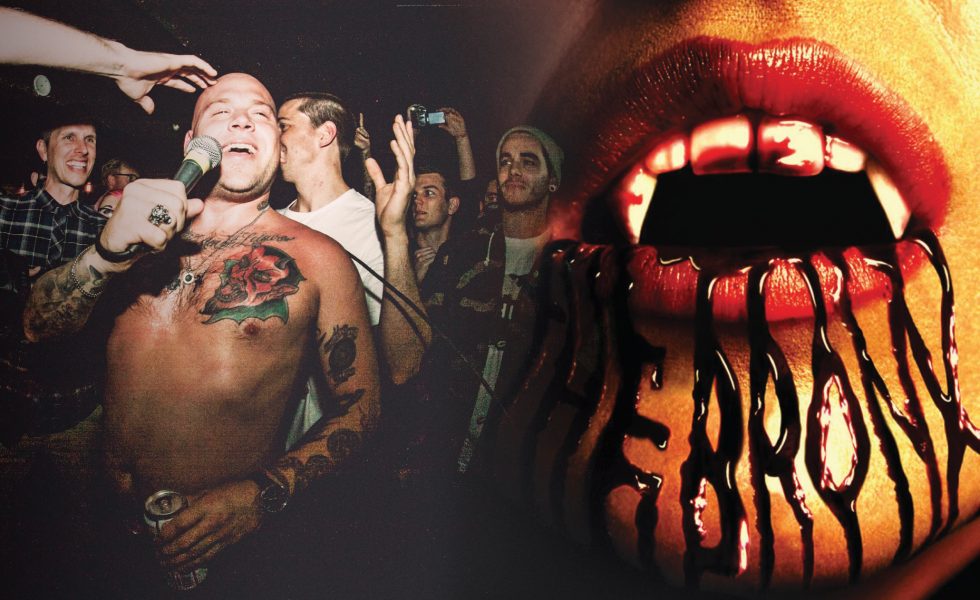 LEGACY: THE BRONX // Heart Attack Americans… The Bronx And The Album That Brought Punk Back

Through the ‘90s and into the early 2000s punk had fallen on hard times. To the world at large, it was better known as a cute posture than an electrified force of life-changing rebellion. Green Day, Sum 41, Blink-182 and Good Charlotte behind them led a generation of commercially motivated punk outfits to the bank. And that was about it.

MORE: Ministry – Welcome To The End Of The Damn World, Kids

The Bronx formed in 2002. From the get-go they were different. The four held an affinity for the Stooges and MC5, rock ‘n’ rollers without question. But at their heart lay the blistering rage. The undirected fury of hardcore and first wave punk. The four were discontent with the way their music had been taken. With a fistful of chords and a few caustic truths, they forged their own path.

The world wasn’t as it should be and Heart Attack American was the response.“Warrrrrrrrh” Matt belts out as six-second opening shriek. “THERE IS NO REVOLUTION!”

Punk had critiqued the impotency of the love generation. Hardcore critiqued punk in turn. In this single moment, The Bronx were throwing all of it against the wall.

Growing up Matt Caughthran, Joby J. Ford, James Tweedy, and Jorma Vik had all been touched by the essence of punk. It’s was where they had found their identity. Celebrating all that was loud, aggressive and nasty, they came together to create a music that would transmit the true feeling of punk back into the heads of a new generation of fans.

Some members may have hailed from further abroad, but the group itself were a product of LA. As the ‘70s grew into the ‘80s the Golden Capital of Pop was losing its sheen. The city was succumbing to a new identity. Beneath the cocaine fantasy of Hollywood and the sunny vibrations of the West Coast sound was a churning underbelly.

Never more than a few streets away from the glossy sterility of the Californian capital was a very different city. A dangerous melting pot of drugs and depravity. A gritty world of sleaze. Hard living.

False Alarm is the product of its environment. After the energy rush of Heart Attack American it curls itself around a salvo of sludgy riffs. They Will Kill Us (Without Mercy) paints pictures of a desolate and sprawling city littered with ever-present threats and cracked pavement. “Good drugs and bad streets,” Matt spits. Notice of Eviction equates doomed romance with vagrancy.

The Bronx is a product of LA. Alongside music raw and untutored, Caughthran’s gravelly vocals deliver lyrics with a drunken slur. It’s in the production too, conjured forth by producer and ex-Guns N’ Roses guitarist Gilby Clark. Recorded over a week in Gilby’s kitchen, there’s a gritty, tense claustrophobic feel behind the band’s frenzied assault.

A vital record that still belts out with ugly truth and brazen honesty. A burning statement of energetic defiance bristling with fuck-the-world attitude.

Teeming with an incendiary conviction, The Bronx spewed forth as ten cuts of maximal punk. Played with violence each powers into its own moment of ferocious ecstasy. Ear-bashing grooves and turbocharged riffs carry its sonics forward. Lyrics are venomous, ragged and frayed. Arriving caked in aural filth. Vik’s rhythms pull it all together with a raw, fast and breakneck momentum.

Ford oscillates between shredding rhythmic slabs and bluesy solos. But his contributions to the record reach further than the frets. Joby was a key creative force, sketching out the bones of the groups’ songs before Caughthran provided lyrics and the remainder of the band filled them out with their own distinctive touches.

A graphic designer by trade, Ford also lent his talents to the record’s artwork. Here a fixation with B-horror kitsch gave rise to the blackened and bloody thematic. This cover is cheap—shmaltzy—but irresistibly eye-catching. In a moment it sums it all up with precision. A trash aesthetic, rock as ‘bad art’. Junk. Trash. Right on.

The less-than-conventional business end of the band’s dealings also shaped this record in interesting ways. Due to a series of deft behind-the-scenes manoeuvres which might leave even Malcolm McLaren nodding in approval, The Bronx brokered a six-figure deal with Island/Def Jam after only 12 shows. Yet they did so under an odd provision. Looking to build their own profile outside of the label’s influence they would fund and release their first album and its accompanying tours entirely by themselves.

They did so through founding their own White Drugs imprint. Why White Drugs? Well as the band later admitted in an interview with Monster Children, they were racking a lot of cocaine at the time.

This self-titled debut dropped in April ‘03. Locally at least. It would also appear on Ferret Music to be circulated nationally and further afield on August 23rd under a larger distribution agreement. The album was a breakthrough hit. The band would become mainstays of the modern pantheons of hardcore and SoCal punk.

Time rolled on. The band did go on to make their major label debut, but the Def Jam thing didn’t really work out. James Tweedy exited in explosive fashion in 2007. Returning to Canada he’s now found God. Forays would be made into mariachi. Jorma too would take his leave in 2016 on relatively better terms. As of 2018, the band continues to power forward.

When you cut it back down to the basics, The Bronx still hits with the hard edge of its initial impact. A vital record that still belts out with ugly truth and brazen honesty. A burning statement of energetic defiance bristling with fuck-the-world attitude.

The Bronx had that one thing that was missing from their sanitised contemporaries: Punk’s ferocious authenticity. A tight and basic unit of social outcasts rocking hard. The Bronx didn’t just carry the torch of punk’s initial fire. They grasped it with a reckless abandon and hurled against just about everything that was wrong with the world.