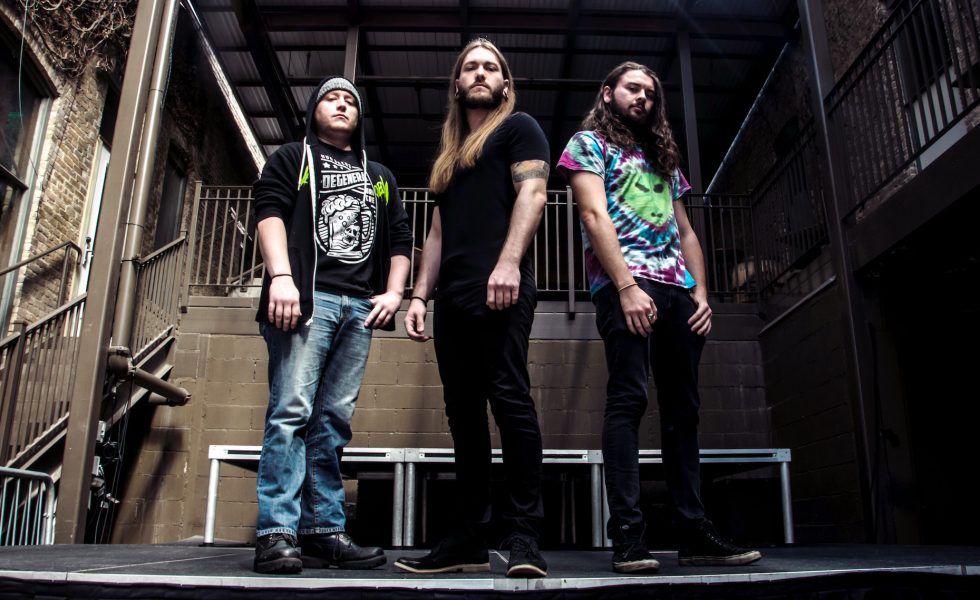 It was quite a victory for an unconventional unit that has suffered plenty of personnel upheavals since guitarist Lucas Mann put the first line-up together in 2009. Stepping back into the live band himself after a break from touring, Mann is reunited with former guitarist Joel Omans and long-serving vocalist Ian Bearer on their forthcoming and as yet untitled fifth album, due for release later this year. Ahead of that, the self-styled ‘aliencore’ band will make their first appearance on Australian shores this month when they tour with Hollow World and Eternal Rest. With Yo Ontiyan replacing him on the band’s recent run of tours, Mann is excited about rejoining Rings of Saturn for these shows.

First let me congratulate you on confirming your first ever Australian tour, and also to you, Lucas for stepping back into the band on this trip.

It’ll be our first time down there, so it will be fun and we’re looking forward to it. It will be my first time back on stage for a little while so I’m extra excited. It’s a long plane flight down there but it will definitely be worth it. We’ve got a new album coming out in 2019 and hopefully we’ll be back to play more stuff from that!

It really doesn’t seem like that long ago that your previous album Ultu Ulla was released.

We try to release an album every two years. It’s pretty consistent. One took three, because there was a delay that was out of our hands. But this latest album for 2019 is all done, the art’s done. We have some guests on that album, Charles Caswell from Buried Alive does a solo, Yo Ontiyan, who has been filling in on tour, and he’s from Japan. Incredible shredder! And it’s the first album we’re using nine-string guitars, so it’s lots of new stuff.

Is it a new direction for Rings of Saturn then—how does it fit into your catalogue of sound?

I would say that it’s a big call back to our past records. It’s going to have a lot of things that the fans like from each one of our past records as well as a lot of new surprises. We’ve always been an experimental band, so we’ve always tried to push the envelope with pretty much everything. Raising the bar production-wise, artwise, with our merch in all the different colours that are possible so it goes along with all the different absurdity that is in our music … I’m excited for everyone to hear it.

We’ve always been an experimental band, so we’ve always tried to push the envelope with pretty much everything.
[ Lucas Mann ]

I remember when seven string guitars first came in, and now you’re using nine-strings! I’m not a guitar player, so what do you think are the limits for the number of strings you can add to a guitar?

I think nine is the final string, and that’s the reasonable limit. Because the ninth string is actually a bass string. There’s a bass range. The reason for the seventh string is to have that extra range for having full standard tuning and adding a drop to it for metal. Then, when you have an eighth string, you get that extra thickness to it that you would transpose a lot of those riffs that you would play on a seven-string, down to that extra low string. The ninth string—if you want to get extra thick, then you go for the breakdowns and you add the bass notes. Brown notes, all over the place. That’s it! I think that 10-strings, 12- or 20 – that’s just for show.

What do you tune a guitar like that to?

How would you compare what you are doing now musically with what you were doing, say, eighteen months ago?

I would say the callbacks that I was talking about would mainly be from the first three albums, primarily our second and third release. The one we just released was very very melodic and kind of different for our band. We tried it out, and many many people liked it and we got a lot of new fans, but it’s good to have everything. We always like to have everything. So we will have melodic stuff, but we like to give the fans what they want, or what they’ve been telling us they want, as well.

So there is still room in your repertoire for melodic stuff, but with nine-string guitars you’re certainly going for the heavy angle.

I see genres as just a bunch of boxes. That’s the whole, fun thing about aliencore. You know, it’s just a name. Everyone’s looking to label everything about metal. I don’t think there’s enough experimentation.
[ Lucas Mann ]

You mentioned aliencore just now, which is how Rings of Saturn has been described by both yourself and others. Are you still using that term even now?

The band’s been around for ten years, and when I made it, I kind of jokingly called it aliencore, and it kind of … you know how the metal community is in genres. It kind of got people talking and wondering whether it was a joke or if it was serious, and now there’s other bands that are calling themselves aliencore and it became a thing. It was out of my hands at that point.

The thing about genres is that everybody seems to have to fit inside of one. Do you find that a little bit restrictive at times, or are you beyond that?

I see genres as just a bunch of boxes. That’s the whole, fun thing about aliencore. You know, it’s just a name. Everyone’s looking to label everything about metal. I don’t think there’s enough experimentation.

Are you playing any of the new songs on the current tour?

No new songs on the headliner set for Australia, but we will be playing songs off of every single one of our past records. So everyone will be able to hear a little bit of everything from those, and then hopefully when the new record comes out, we’ll be back to play some new stuff. And we’ve got a lot of new material on this record. It’s our longest record yet.

Just being able to come down to Australia as the headliner on your own tour must be pretty amazing for you.

Yes, it’s an hour long set, so that’s really great. Sometimes when you go on tour and your set’s only … you know, when we were smaller it was only like twenty minutes. And America’s big! You drive eight hours to play twenty minutes, so it’s very good to able to play on a tour like this.

You are still very young for a band that’s been around for as long as you have. When you start a band when you’re very young, you can have no idea where it’s going to take you or for how long. A lot of bands would have come and gone in that time, and yet Rings of Saturn is still around. You must feel a sense of achievement to have kept it going now for ten years.

Well thank you for recognising that. It’s very amazing to have been around this long. Like you said, we’ve been around for ten years. I made it around 2009 and in 2010 we released the first album, then the next year it was re-released by our first label Unique Leader Records, and then a couple albums later we were on Nuclear Blast Worldwide … technically this year would be our tenth year, but we’re going by the year we got signed to our label, which will be 2020. We’ll probably do something special like a tenth year anniversary tour. It was a lot of hard work, an extremely large amount of work, especially because, you know, I was just graduating high school at 18, going off on tour trying to do this band, so to be honest, in the beginning it was very hard! [laughs] But the work paid off and I’m very happy where it is now and there’s nothing else that I would rather do. So to those bands out there that are struggling—keep with it.