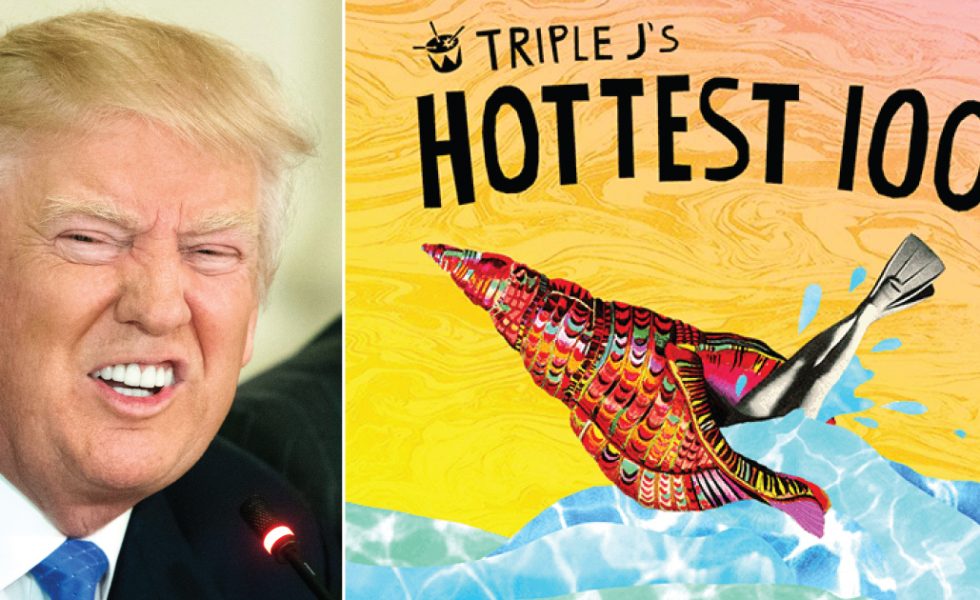 #REALTALK // What Does Trump’s Presidency and The Hottest 100 Have In Common?

Heavy fans of Australia—if you feel bad looking at the pathetic piece of dropped kebab lettuce that is this year’s Triple J Hottest 100, you should. You should feel bad, just like progressives in America feel bad because they helped Donald Trump to victory. Because it’s all your fault.

MORE: FEATURE ARTIST: The Bennies – Aren’t Playing Games… Except for When They Are

According to the ABC, this was the “biggest year ever” for Hottest 100 voting, with a record 2.4 million votes cast. This figure was up 5.81% on last year. The first song with a recognisable guitar in dropped at #19, with The Killers. Another post-Oasis Wonderwall clone for Gen Xers with no concept of fun to wave their hands around at. No respectable 20-something likes the Killers. In true millennial style, kids love to do nothing and complain about the result after. Thus this list.

Our lifestyle editor Louise made a list of all the bands that were “robbed,” as if some sinister cabal were siphoning off votes from Ocean Grove, Northlane, or Sløtface to Kendrick Lamar or Lorde. But no. As biased as the ABC is (don’t even @ me), this ballot wasn’t rigged. Don’t call in the UN observers, call your Dad for a stern talking to.

What this list represents, at least for heavy music fans, is a mild application of the Kitty Genovese effect, or the Bystander Effect. In short, if something bad happens in a crowd of people, you hold off from intervening. You figure someone else has the sitch under control. Of course, if everyone thinks that, no one intervenes. This effect, in part, helped Donald Trump achieve victory in the US Presidential Election.

Kendrick Lamar’s imagination-capturing DAMN. making multiple entries makes perfect sense. But a near zero result for the distorted guitar and angsty teen in the Hottest 100 is downright baffling. Gang of Youths? Get the fuck oudda here.

For months, the news media in America laughed off the idea of a Trump presidency. I wouldn’t have been surprised if the Obamas re-decorated the Lincoln Room to “just the way Bill liked it” when he was President. Or as it would have been in this case, First Man. First Husband? First … Sir? I don’t know. The point is, the progressive left in America didn’t vote in record numbers—in fact many of them voted Trump to stick it to the Democratic National Congress for not nominating Bernie Sanders. Yeah I know, lefties are mental. They thought Hillary was such a shoe-in, they figured she’d coast to victory on smug posturing alone. How did that turn out for ya?

OK, maybe people are just over rock music in general. The Billboard Top 200 #1 spot didn’t see a rock song perched there for fifteen years, with British “rock” band Coldplay’s Viva la Vida going to number one for a solitary week in 2008. That was before yielding the position to Black American pop and R&B artists. Black American R&B and hip-hop dominate the popular music charts, and have done since the mid-1990s. Kendrick Lamar’s imagination-capturing DAMN. making multiple entries makes perfect sense. But a near zero result for the distorted guitar and angsty teen in the Hottest 100 is downright baffling. Gang of Youths? Get the fuck oudda here.

What’s even weirder is the nostalgi-fest that was Double J and their replay of the 1997 list. The Top 10 was wall-to-wall rock, excepting Chumbawumba and Pauline Pantsdown (who figured that would be relevant 20 years later?) Note that in 1997 you had to post in your ballots. POST, MOTHERFUCKER. You know, actual effort. Kids didn’t fall into line with the mainstream either: ARIA #1 single Freak by Silverchair only placed at #13. Maybe we had better sell-out detection back then. Or maybe kids today just straight up don’t give a fuck.

If you are one of the teeming millions that couldn’t care less, then expect more lightweight, focus-group approved Hottest 100 lists as the days go by. Remember, this is one giant marketing exercise, telling record companies where to invest their money to gain the best return. What it tells them is no one gives a fuck about heavy music. So, if you’re crying like a demented Clinton supporter into your turmeric soy chai mocha latte at the fact your fave band didn’t get a gong, take a look in the mirror. That’ll show you who’s to blame.