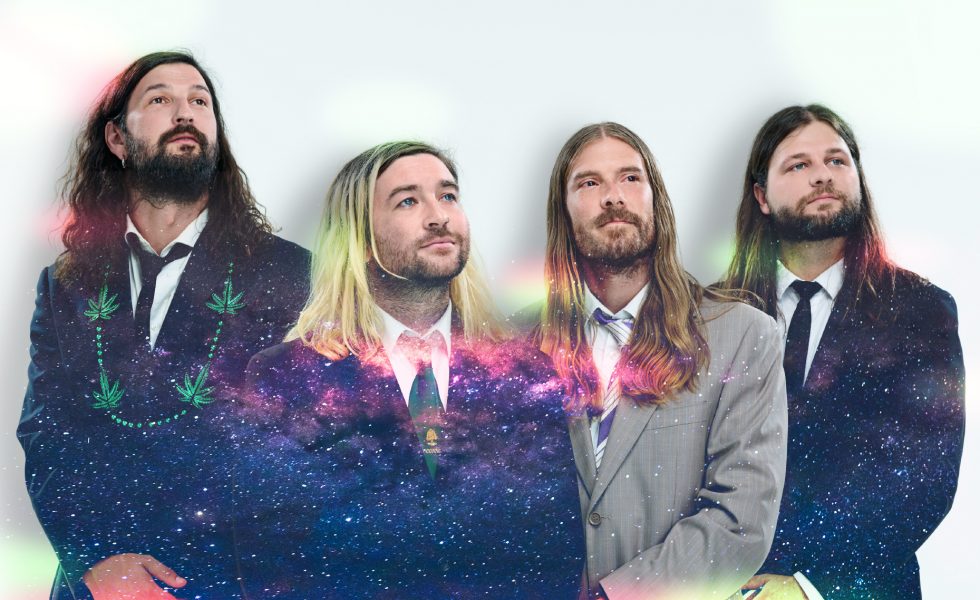 FEATURE ARTIST: THE BENNIES // Aren’t Playing Games … Except For When They Are

When you put out a record called Natural Born Chillers, you’ve got to be pretty confident in your ability to ’lax. Someone sees you taking anything to seriously and your whole rep is for shit.

Or at least that’s what The Bennies seem to think, when we sit down with bassist Craig Selak and vocalist Anty Horgan at a chill bar on a weekday afternoon (the chillest time to drink) to talk about how the alterna-punk reggae lovers recorded their third full-length record.

“It was real fun. We had some bits and pieces kicking around we just started putting them down …” Anty’s eyes start to dart around and he nervously takes a sip of his drink—Craig comes to his rescue.

“Basically we booked some studio time and piffed a bunch of booze and weed and stuff in the studio and nobody really remembers what happened and then we walked out and were like, ‘Sweet, this is done. Let’s put it out’.”

It seems that the laidback approach and The Bennies go together like Mexican beer and lime. According to Craig, the band managed to wade through the blackout periods and arrive at a record they’re super stoked on. One that finds them sounding comfortable in their own skin and like they’re having a fucking blast doing their thing.

“We’ve worked with [recording engineer] Sam Johnson on practically everything we’ve done, so it’s very comfortable and you don’t need to question the process or anything like that,” Craig says by way of explaining how he thinks the end product may have come to be.

“I think this time around we were trying to get good takes that really have the feeling behind it … there was a push to get a more live-sounding recording than we’d done for Wisdom Machine. So we were trying to bridge the gap between the energy we have on stage and trying to bring that into the studio.”

“Sometimes it gets pretty intense though. One time we were all playing Mario Kart on a plane and someone shot off a blue shell and yelled out ‘I bombed the shit out of you!’ and then it’s like ‘Woah. Everyone chill’.”
[ANTY]

However Anty remembers the intricacies of the experience recording Natural Born Chillers in an entirely different fashion.

“There was a fierce fucking competition on this old arcade machine, where it was like Asteroids—where you’re that triangle flying around … but it was an updated version of that where you’re a spaceship from the future that travels through time shooting down warplanes and stuff, and that was a very fiery part of the recording.”

But which Bennie ultimately took out the crown?

“I think it was between me and Jules, because Jules never got a high score but he did get to a higher level … But I don’t know if that’s just my memory lying to me.”

Beyond using its recording sessions as an excuse to chase arcade machine glory, Natural Born Chillers finds The Bennies further developing the sound of 2016’s Wisdom Machine and hone in on their ska influences. According to the dudes, it also in a way marks the end of a chapter for the band.

“When we were recording we were kind of in this in-between zone where we didn’t know if we should just put four of them down and make it an EP. But we thought, ‘fuck it’ and put them all down. That way everything we do from this next point we’re starting completely fresh.”

But before they go down that path, they still need to play in front of just about every person who’s ever looked at a Bob Marley poster. With tours booked in for Australia and abroad, Anty said the dudes are getting ready for some mammoth Nintendo Switch sessions.

“At the start of our Europe tour last year we had a bit of a band payout and Craig and Bowie [drummer David Beaumont] went and bought Switches, Jules wasn’t really that interested and I was in debt so couldn’t afford one at the time. So we had this whole tour where they were playing it and talking about Zelda and I was fucking having the worst time of my life. I was on the DS and hating it. But I finally got one not too long ago and it’s the best time in the world.”

“Sometimes it gets pretty intense though. One time we were all playing Mario Kart on a plane and someone shot off a blue shell and yelled out ‘I bombed the shit out of you!’ and then it’s like ‘Woah. Everyone chill’.”